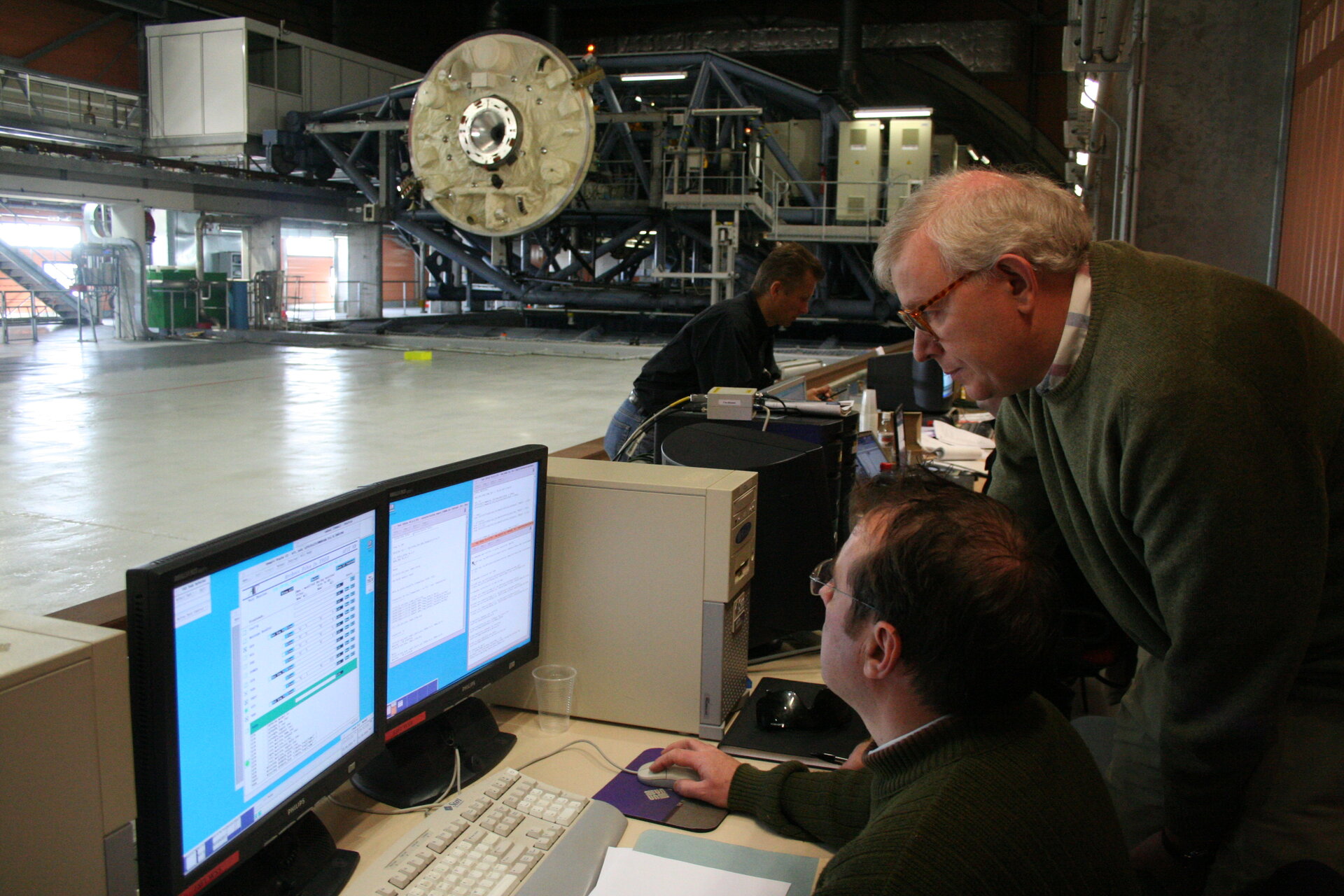 A milestone in the development of the Automated Transfer Vehicle (ATV) was passed earlier this summer at Europe’s largest ship hull test facility, west of Paris. It involved tests conducted on the critical final phase of the automated rendezvous and docking system of ATV by using state-of-the-art sensors and flight control software.

"For the first time, to replicate the Jules Verne ATV rendezvous, ATV flight sensors were used successfully in life-size rendezvous conditions, feeding measurements into the flight control computer. At the same time, a simulator calculates the dynamic motion corresponding to how the vehicle behaves in space. A third system replicates physically this computation into a relative motion between the sensors, carried by an industrial robot, and their targets carried by a mobile platform. The integration of all these systems into a closed-loop test, as we call it, worked exceptionally well from start of the rendezvous – at some 250 metres – all the way to docking," said ESA ATV engineer Stein Strandmoe, who supervised this series of rendezvous test campaigns.

For the final rendezvous manoeuvres of the Jules Verne mission, scheduled for the middle of next year, the ATV will use its videometer camera-like sensors, under the supervision of an independent system, based on a laser scanning device. Safety is thus ensured with a centimetre precision while the spacecraft and the ISS are circling the Earth at 28 000 km/h. These built-in automatic capabilities of the ATV must be compatible with the demanding specifications of human spaceflight safety, required by the permanently crewed ISS.

To realistically check the flight hardware videometer capabilities – in acquisition and targeting – the tests are conducted in a research facility of the French defence agency 'Délégation Générale pour l'Armement' (DGA), located in Normandy.

Inside a 600-metre long building, a 120-tonne mobile platform controlled with millimetre precision, enables the continuous tri-dimensional approach between the two space vehicles, from a range of several hundred metres to within docking contact conditions. On the platform, a set of passive rendezvous targets (retroreflectors), identical to the ones installed on ISS, face the sensors mounted on an articulated industrial robotic arm. This platform replicates the closing motion between ATV and ISS, and the robot replicates the relative rotation and lateral motion between the two vehicles. The relative motion achieved is identical to the one expected during next year's rendezvous between Jules Verne and ISS.

During these angular movements executed by the seven-metre high robotic arm, the engineers were able to check the videometer tracking reliability towards the ISS retroreflectors. The function of the videometer is to analyse images of its emitted laser beam automatically reflected by passive retroreflectors installed next to the Station's Russian docking port where ATV will be attached. It was also possible to check that the videometer data are correctly provided to the ATV control system in order to adjust its trajectory accordingly.

“When the ATV is targeting and getting closer to the ISS, the Station has its own oscillations due to the firing of ISS attitude control jets. So the ATV must adjust constantly like two dancing partners who remain constantly in phase in their movements”, said ESA astronaut Jean-François Clervoy, senior advisor to the ATV programme.

To make this rendezvous testing as realistic as possible, a 4.15 metre diameter mock-up of the aft end of the ISS Service Module is placed on the facility's moving platform. It includes the docking port, the Russian-made thermal blankets and the retro-reflective targets. The facility also can simulate the Sun using a 24kW electrical spot-light during the simulations.

For the first time, this rendezvous test campaign has made different systems work successfully together: on the one hand, the Jules Verne ATV flight software, the flight sensors and the rendezvous trajectories and on the other hand, the sophisticated motion simulation hardware and software developed by ESA with Astrium ST assistance in Val de Reuil.

“These tests are very important because it is the first time ever that we can really test the whole system for the rendezvous and docking. This is the only facility in the world which allows us to simulate the whole rendezvous, from the time Jules Verne starts coming in – using the optical sensors – right through to docking. And this system works in complete closed-loop conditions where all aspects of the spacecraft are either represented for real – software, sensors, trajectories – or simulated such as Jules Verne inertia, thrusters firing etc...", said John Ellwood, ESA’s ATV Project Manager.

Jules Verne, the first flight model of a series of ATVs foreseen to service the International Space Station (ISS), is currently at the ESA facility in the Netherlands is undergoing final integration.