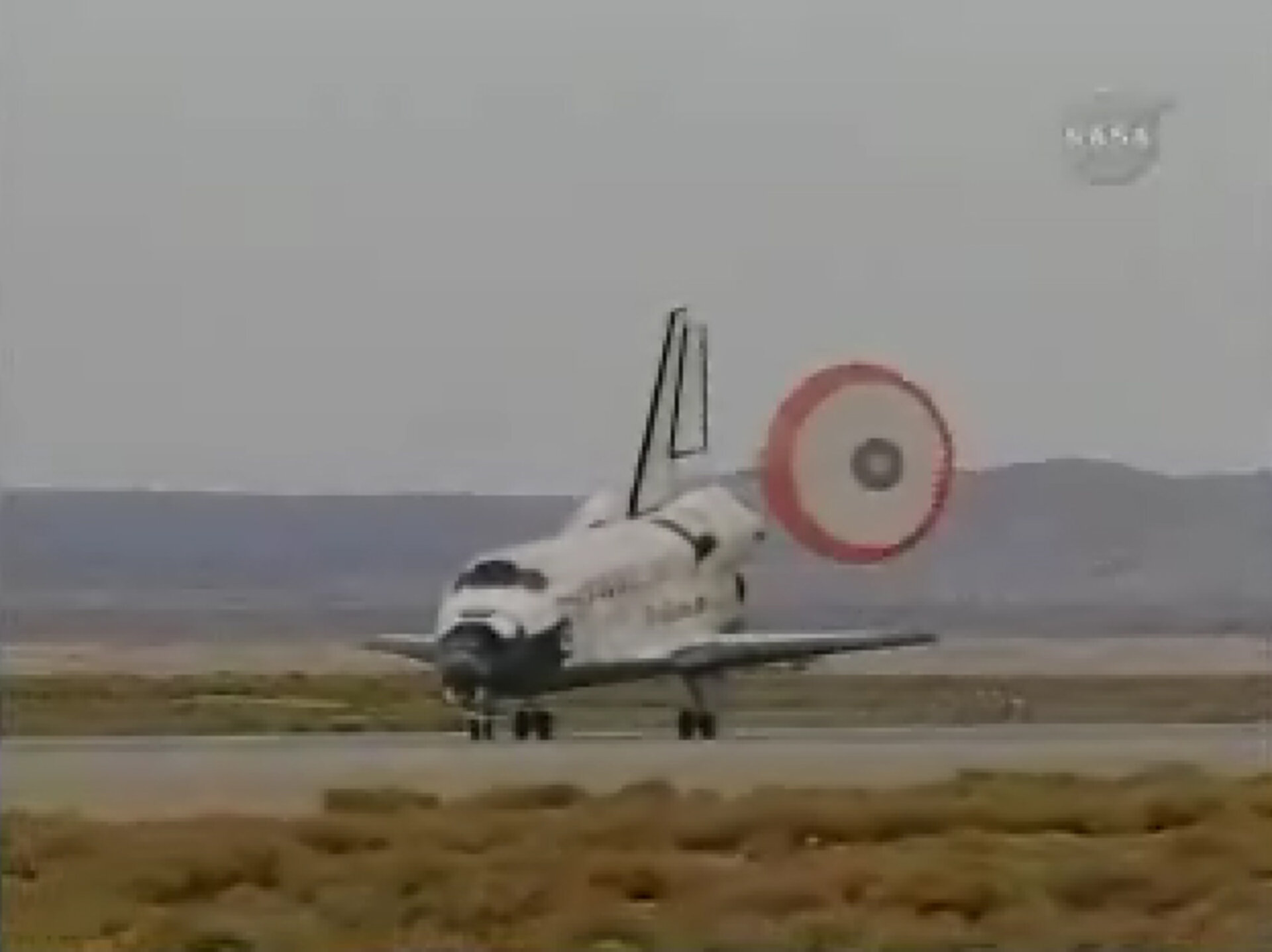 ESA PR 22-2009. Space Shuttle Discovery landed at Edwards Air Force Base, California, at 02:53 CEST (on 12 September) completing all objectives of the 14-day STS-128 mission to the International Space Station.

Discovery undocked from the orbital outpost at 21:26 CEST (19:26 UT) on Tuesday 8 September and safely brought back to Earth her crew of seven – including European Space Agency astronaut Christer Fuglesang of Sweden – and a precious cargo, ESA's European Technology Exposure Facility (EuTEF) which has spent one and a half years in space.

During his Alissé mission, Christer Fuglesang played a crucial role in most of the tasks performed by the STS-128 crew on the ISS. The Swedish astronaut participated in two extravehicular activities (EVA), logging 13 hours 40 minutes outside the Station. With NASA astronaut John 'Danny' Olivas, he removed and replaced a depleted ammonia tank. Fuglesang thereby set a new record, as the 800-kg replacement tank was the heaviest object ever moved by hand by an ISS spacewalker. On their second spacewalk, Fuglesang and Olivas installed avionics cables and connectors between the Station’s truss and the Unity Node 1 module in order to prepare for the docking of the European-built Node 3 module named Tranquility which will be delivered by the STS-130 Shuttle mission in February 2010.

Before this, Fuglesang also supported the mission's first EVA, during which the EuTEF payload package, which had been installed on an external pallet of ESA’s Columbus Laboratory module in February 2008, was removed and transferred to Discovery’s payload bay. The European Technology Exposure Facility consists of a set of nine experiments that were exposed to the vacuum of space to test materials and equipment, monitor the space environment and take pictures of the Earth below. Throughout its 18 months in space, EuTEF has been under the continuous control of the Erasmus User Support and Operations Centre at the Agency’s European Space Research and Technology Centre (ESTEC) in Noordwijk, the Netherlands. Its samples and instruments will now be returned to the science teams for further analysis.

Fuglesang was also in charge of operations related to the Italian-built Leonardo Multi-Purpose Logistics Module (MPLM), which was carried inside the Shuttle’s payload bay and transferred to one of the docking ports of the Harmony Node 2 module to deliver goods and equipment to the ISS. The elements that the crew moved from Leonardo into the ISS included further ESA contributions: the Minus Eighty Laboratory Freezer for ISS (MELFI), which was installed inside Japan’s Kibo laboratory module to store experiment samples over long periods at very low temperatures; and the Materials Science Laboratory (MSL), the first materials science research rack on the ISS which has since been installed in the U.S. Destiny Laboratory.

Discovery launched from Kennedy Space Center at 05:59 CEST (03:59 UT) on 29 August and docked with the ISS some 45 hours later. Upon arrival, Christer Fuglesang met up with fellow ESA astronaut Frank De Winne of Belgium, who has been onboard since late May as a permanent-crewmember under his own OasISS long-duration mission. De Winne remained on the ISS when the STS-128 crew left after nine days of joint operations. In October he will take over as ISS Commander – a first for an ESA astronaut.

Christer Fuglesang has now completed two Space Shuttle flights and spent over 26 days in space, including 32 hours of EVA which make him the most experienced spacewalker among ESA's astronauts.

Fuglesang is the fourth ESA astronaut to have worked onboard the ISS since Europe’s Columbus Laboratory was installed 18 months ago. Frank De Winne is scheduled to return to Earth in November. Next in line to fly to the International Space Station is Roberto Vittori of Italy who will participate in the STS-134 mission in July or September 2010 to deliver the Alpha Magnetic Spectrometer (AMS). Paolo Nespoli also of Italy and André Kuipers of the Netherlands will follow for a six-month flight each as European crewmembers on Expedition 26/27 in 2010/11 and Expedition 30/31 in 2011/12 respectively.