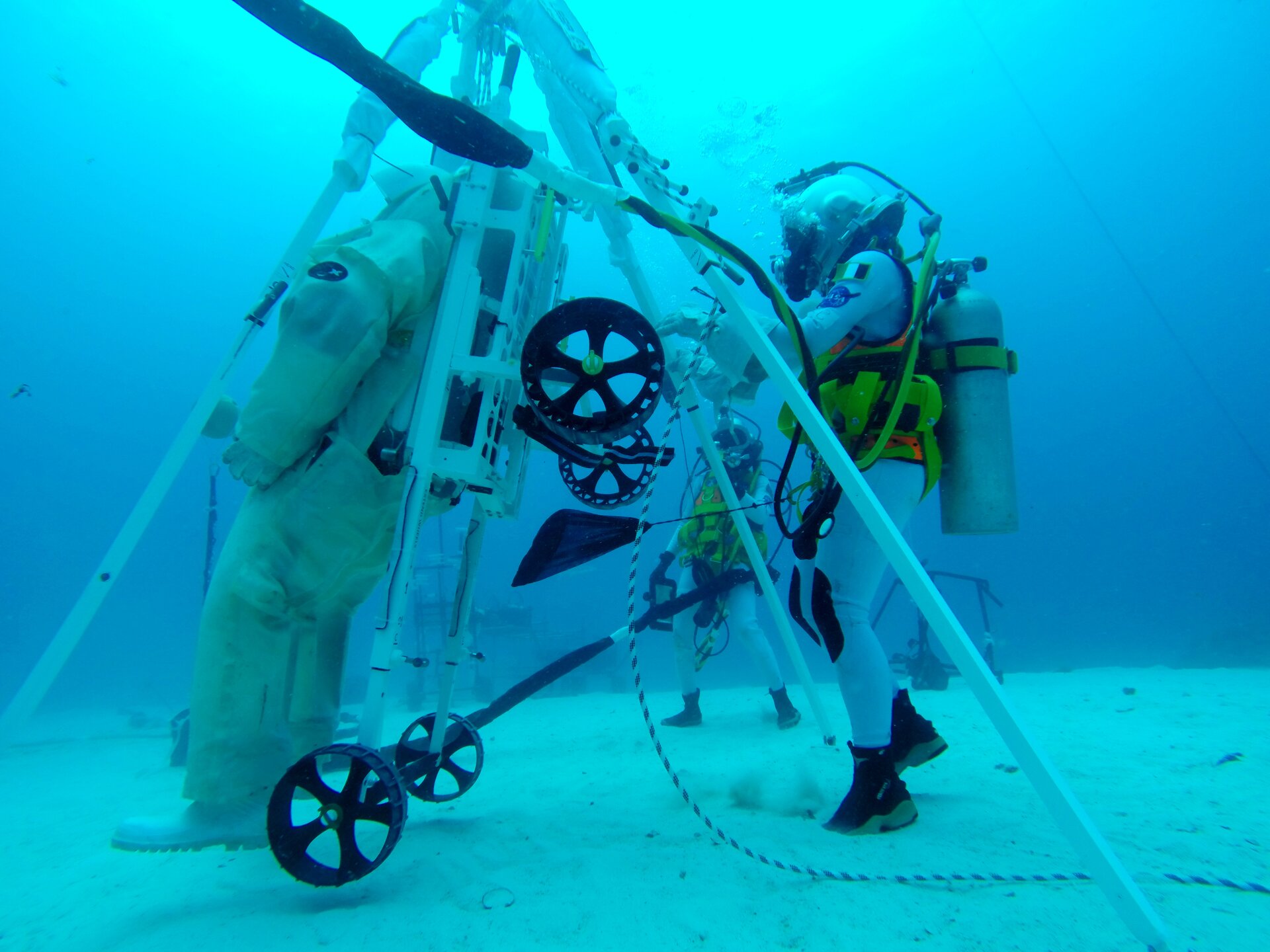 With its rocky, sandy terrain and buoyant salt water, the bottom of the ocean floor has more in common with the lunar surface than you might imagine. That is why this week two members of NASA mission NEEMO 23 are testing ESA’s latest prototype to rescue astronauts on the Moon.

ESA’s Lunar Evacuation System Assembly (LESA) is a pyramid-like structure designed to be deployed by a single astronaut in lunar gravity to rescue an incapacitated crewmate. The device enables an astronaut to lift their crewmate onto a mobile stretcher in less than 10 minutes, before carrying them to the safety of a nearby pressurised lander.

ESA astronaut Pedro Duque and NASA astronaut Kjell Lindgren tested an earlier prototype during NASA mission NEEMO 22 in 2017. This week two astronauts, and members of the NEEMO 23 crew currently living and working onboard undersea habitat Aquarius for nine days, will put LESA to the test.

ESA head of spacewalk training and Neutral Buoyancy Facility (NBF) operations Hervé Stevenin says LESA is the world’s first prototype for a system that will allow the safe and rapid recovery of a fallen astronaut on the Moon’s surface by a single spacesuit-wearing rescuer. The catalyst for its development came from a three-year Moondive study.

Commissioned by ESA and led by French company Comex, this study looked at how the 10-m deep pool at ESA’s astronaut centre in Cologne, Germany, could be used to simulate lunar gravity underwater to test equipment, tools and operational concepts for the Moon.

A key part of this work was identifying essential activities astronauts would need to perform while carrying out Extravehicular Activities (EVA) on the Moon’s surface. Rescuing a fallen crewmate emerged high on the list.

“Recognising the importance of providing astronauts with the capability to rescue an incapacitated crewmember during lunar exploration, we began working on potential concepts four years ago at ESA’s astronaut centre,” Hervé explains.

Hervé says a good understanding of the suit aspect and EVA itself was vital in development of LESA, as EVA spacesuits are bulky and restrictive. EVA suits are also quite heavy, despite the reduced gravity of the Moon being one sixth of that on Earth, and pressurised EVA gloves reduce an astronaut’s dexterity.

“There is no way an astronaut could carry their fallen crewmate over their shoulder while wearing an EVA suit,” Hervé says. “Our objective was to bring all the rescue actions into the working range of the EVA-suited astronaut to ensure a rapid and safe rescue.

“LESA can be transported like a golf caddy and placed close to the fallen astronaut to provide a lifting mechanism and a stretcher that is easy to maneuver. Once the rescuer has used the device to lift their crewmate and attach the stretcher to their back, they add wheels to the stretcher and transport them to safety.”

Next steps for lunar rescue

As members of the current nine-day NEEMO 23 mission, ESA astronaut Samantha Christoforetti and NASA astronaut Jessica Watkins will evaluate the second version of LESA during an underwater spacewalk in the Atlantic Ocean this week. The pair will wear EVA gloves and take EVA suit constraints into account as they test the lifesaving device.

Rather than taking turns to play the role of fallen crewmember, the pair will test LESA on Comex’s EVA space suit simulator. The underwater weight of this suit simulator is equivalent to the weight of an astronaut wearing an EVA suit on the Moon and it has been used during previous underwater testing, including the Apollo 11 Under the Sea mission off the shore of Marseille France in 2013.

Hervé says feedback from Samantha and Jessica will aid further development of the LESA concept, as ESA seeks to work with NASA on opportunities for future missions to the Moon.

“ESA has been participating in NASA’s NEEMO missions for the past eight years. With our shared focus on sending astronauts to explore the lunar surface by as early as 2024, joint testing through this very NEEMO 23 mission paves the way for potential NASA-ESA cooperation.”