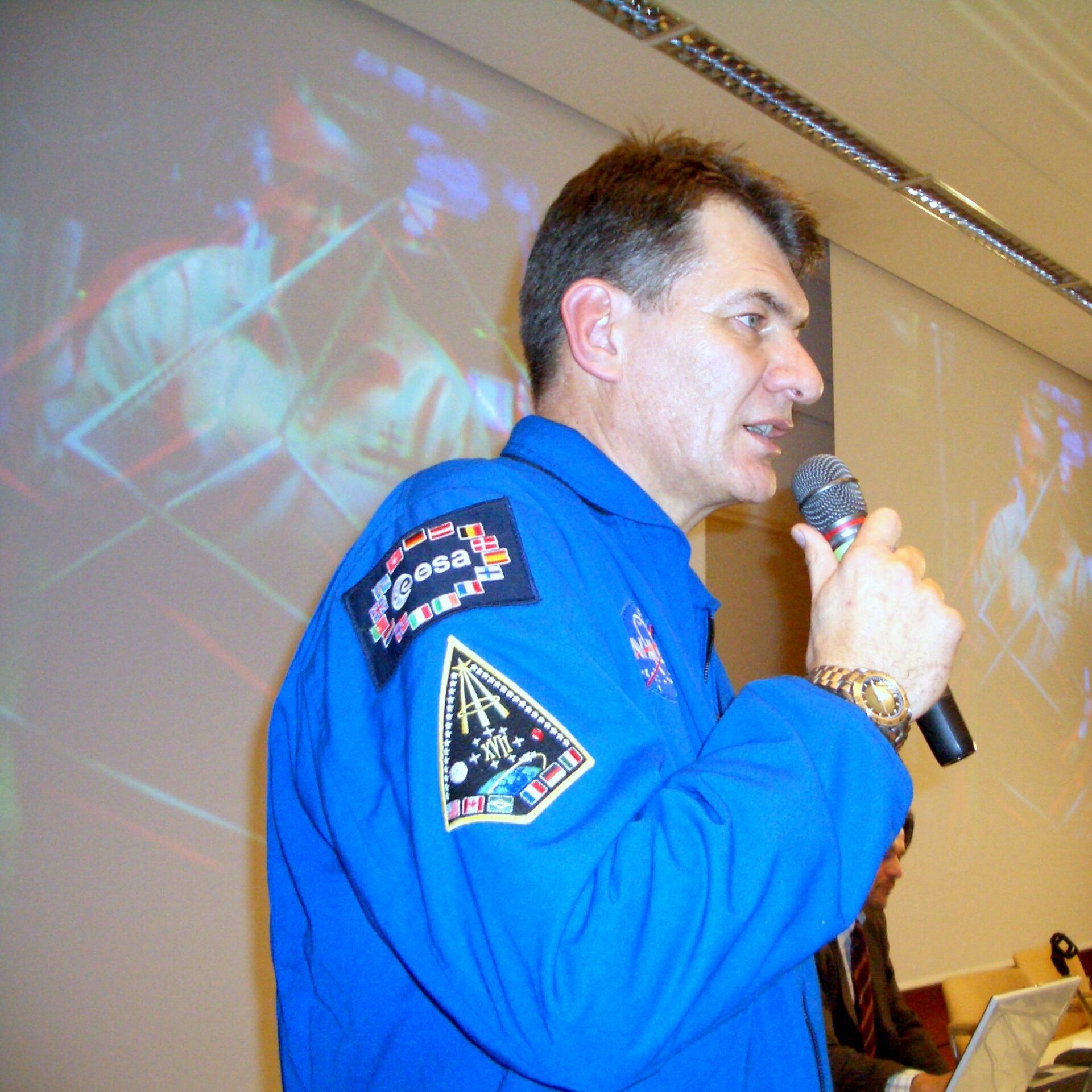 ESA astronaut Paolo Nespoli spoke yesterday with his colleague Thomas Reiter on board the International Space Station (ISS) via live link. The call was placed from ESRIN, ESA’s Establishment in Italy, located in Frascati, near Rome. The call began at 21:25 CET (20:25 UT) and lasted around 7 minutes.

During this 'Space-to-Earth' conversation between Nespoli and Reiter, the astronauts talked about some of the experiments being done at the moment as part of Reiter’s Astrolab Mission. Unfortunately for the audience in ESRIN a video link to the Station was unsuccessful - the link was with audio only.

ESA astronaut Thomas Reiter has now lived on board ISS for almost five months as Expedition crew Flight Engineer 2. He is the first non-US, non-Russian astronaut to take part in a long-duration mission to the ISS. During his stay Reiter, conducted a series of science and technology experiments, and he worked on ISS systems.

He is also performing technology demonstrations (3D camera) as well as industrial and educational experiments for universities and primary/secondary schools. Reiter and his crewmates are also tasting high-quality food specially designed in order to improve the lot of astronauts far away from planet Earth and to improve the overall astronaut’s health.

During the event, which was jointly organised with the Italian space agency, ASI, Paolo Nespoli talked to the press about the training in preparation for Space Shuttle mission STS-120, his first spaceflight, due to take place in the summer of 2007. The STS-120 mission will launch Node 2, an Italian-built U.S. connecting module, to the International Space Station.

"I am very much looking forward to my first spaceflight. I have already started an intensive preparation phase which is very challenging and exciting.” said Paolo Nespoli. “With the launch of Node 2, Europe will see the launch of its first European node. It is an important step because Node 2 will serve as a connecting element for the European Columbus laboratory, the US laboratory Destiny and the Japanese laboratory Kibo. It will also be the attachment point for the Japanese HII transfer vehicle. It will carry a docking adapter for the US Space Shuttle and serve as an attachment point for the MPLMs – the Italian-built cargo modules that are carried to and from the Station inside the Space Shuttle.”

Nespoli’s mission will be carried out in the framework of the Memorandum of Understanding between the Italian space agency, ASI, and NASA for the supply to NASA of three pressurised Multi-Purpose Logistic Modules (MPLM) and the assignment to Italy of flight opportunities and ISS utilisation.

Node 2 is a pressurised module for the Space Station which, along with Nodes 1 and 3, interconnects the research, habitation, control and docking modules of the Station itself. The Nodes are used to control and distribute resources between the connected elements. This Node 2 flight precedes the launch of ESA’s Columbus laboratory to the ISS.

Located in Frascati, a small town 20 km south of Rome in Italy, ESRIN was established in 1966 and first began acquiring data from environmental satellites in the 1970s.

ESRIN acts as an interface between ESA and those who use its services. The centre has close links with European industry, the European Union and the civil protection, agriculture and environment ministries within ESA Member States. ESRIN also cooperates with international organisations including UN agencies and the European Commission, and plays an important role in many international projects. These include the Geosphere/Biosphere Programme, the Committee for Earth Observation Systems and the International Charter on Space and Major Disasters.

In all its activities ESRIN pursues ESA’s objective of increasing interaction with users in order to develop new products and services, and support the competitiveness of the European space industry. ESRIN is helping to bring about a fertile mix between the two worlds of science and space applications for the benefit of all Europeans.