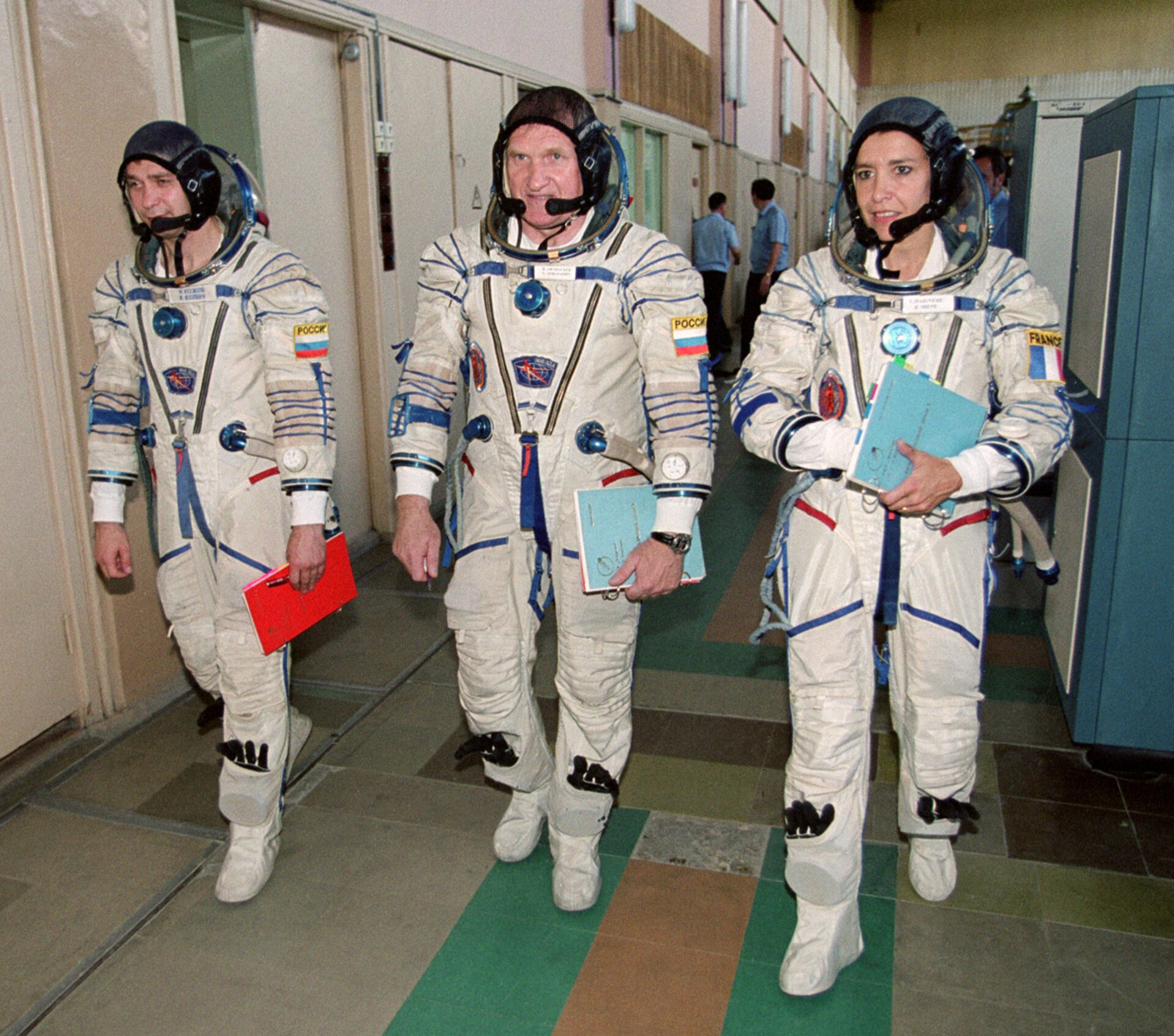 Since January 2001, ESA astronaut Claudie Haigneré has been based at Star City outside Moscow, in training for October's Andromède mission to the International Space Station. For Andromède, jointly organized by the Russians and the French space agency CNES, Claudie will serve as flight engineer in the left-hand seat of the Soyuz spacecraft.

Andromède is a 'Taxi' flight: the Soyuz will remain docked to the ISS to act as the station's lifeboat, while she and her two crewmates return to Earth aboard the current Soyuz lifeboat, now approaching its 'best before' date. But the mission will last a full ten days - long enough for some serious scientific work in microgravity physics, Earth observation, life sciences and ionosphere study, as well as an educational programme that should benefit students back on Earth.

The first few months of Claudie's training were mainly theoretical. About 200 hours were devoted to Soyuz systems:

"I have already been through four training periods at Star City, so this time the work was much easier. I've been able to concentrate mainly on technical systems and orbital dynamics: getting into orbit, manoeuvring, approach, docking, de-orbiting and descent."

She spent a relatively brief 150 hours familiarizing herself with the Russian section of the ISS, since short-duration 'Taxi' missions have no station maintenance assignments. But again, experience helped.

"Many of the Russian ISS systems are derived from the old Mir station. Two years ago, I was back-up for my husband Jean-Pierre Haigneré's long-duration flight on Mir, so I've already had some thorough training there. I was able to concentrate on new ISS equipment, especially the computer systems." A series of exams marked the end of theory and the beginning of practical work, in which one-to-one classroom lessons were interspersed with sessions aboard Star City's Soyuz and ISS simulators.

From June onward, the Andromède team began to train as a crew. With Victor Afanassiv as commander and Constantin Koseev as second engineer, Claudie spent a week at the CNES (French Space Agency) facilities in Toulouse. There, they familiarized themselves with the on-board science packages they will manage during their mission.

Then it was back to Star City for some more hard work. To begin with, the crew put in 15 four-hour sessions in the Soyuz simulator practicing flight manoeuvres and learning the best response to 'non-nominal situations' - a phrase that covers everything from a communications glitch or a sluggish attitude-control thruster to a full-blown emergency.

They spent another 15 sessions in the docking simulator, practiced manual re-entry and then moved on to mockups of Zarya and Zvezda, the Russian ISS modules. In between sometimes gruelling simulator work, they received more training on their science payload from French and Russian instructors.

"Right from the beginning, we've also had straightforward physical training two or three times a week," says Claudie. "There are also medical examinations every three months. The first was when we started training, the second to confirm the crew choice and the final one will be a few weeks before launch."

There are two other medical events. At 60 days and at 30 days before launch, the cosmonauts undergo 'Basic Data Collection' (BDC): the object is to set reference points against which the physiological changes caused by their mission can be measured. "We've already had the 60-day BDC," says Claudie. "The launch date is getting closer by leaps and bounds."

August began with the arrival of some old friends, when ESA astronauts Roberto Vittori and Frank de Winne came to Star City to begin training as prime crew and back-up for the Taxi-3 mission scheduled for next April. And at the end of the month, the Andromède crew had a change of scene.

You can read the next installment on Claudie's training, in NASA's Johnson Space Centre, next week on this webpage.