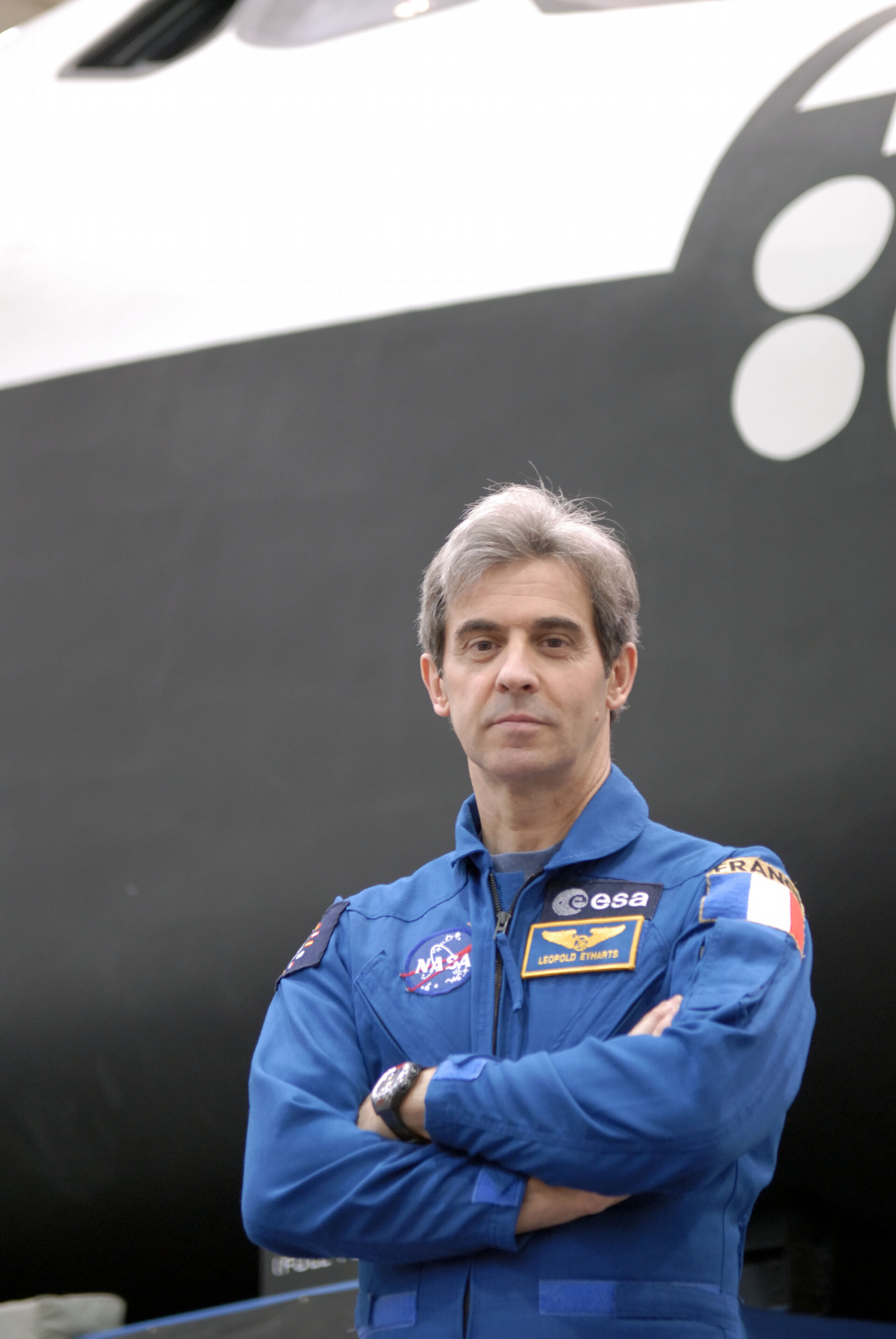 ESA PR 07-2007. ESA astronaut Léopold Eyharts of France has today been assigned to fly onboard the International Space Station for the delivery and commissioning of the European Columbus laboratory currently planned for this autumn.

He will be a member of the Expedition 16 crew to the ISS. He is set to fly there on Space Shuttle (Discovery) mission STS-122 and will return home with the (Endeavour) STS-123 crew some two months later.

En route to the ISS, Eyharts will be accompanied by five NASA crewmates and ESA astronaut Hans Schlegel of Germany, who was assigned to STS-122 last July.

While Eyharts will remain onboard the Station to oversee activation and check-out of the Columbus laboratory, Schegel will take a Shuttle return trip home 14 days after launch.

Léopold Eyharts has been a member of the European Astronaut Corps since 1998 and carried out his first-ever space mission to the Russian space station Mir from 29 January to 19 February 1998 as a French space agency (CNES) astronaut.

On this forthcoming mission, Eyharts will play a key part in the installation, activation and commissioning of ESA’s Columbus laboratory. Columbus is the cornerstone of Europe’s contribution to the International Space Station and is the first-ever European laboratory devoted to long-term research in space. Eyharts will become the first European astronaut to test and operate in-orbit the systems of the Columbus module as well as the European science experiments carried onboard. During his ISS mission, he will act as flight engineer and will also support robotics activities.

Columbus will be transported to the Station in the Shuttle’s cargo bay together with five internal rack facilities (Biolab, the Fluid Science Laboratory, the European Physiology Module facility, the European Drawer Rack and the European Transport Carrier). Two external experiment facilities for Columbus (EuTEF and SOLAR) will also be travelling in the cargo bay and will be attached onto the outside of the laboratory module during the STS-122 mission.

Following the launch from the Kennedy Space Center at Cape Canaveral in Florida, the Shuttle will take two days to rendezvous and dock with the ISS. The Columbus laboratory will then be unberthed from the Shuttle’s cargo bay using Canada’s Space Station robotic arm (Canadarm 2) and mated to the starboard-side docking port of Node 2, the European-built ISS connecting module. Once attached, Columbus will be powered up and its payload rack facilities will be moved from their launch configuration to their operational locations in the module.

Four spacewalks (EVA, extra-vehicular activities) are scheduled during this mission. The first will help install and power-up Columbus. The second EVA will serve to install the Columbus external payloads. The third and fourth will be devoted to various ISS maintenance tasks. Final laboratory commissioning and activation/check-out of the science experiment racks will take place during the weeks that follow and will be carried out by Léopold Eyharts as a member of the resident ISS crew.

Once the European laboratory is attached, the Columbus Control Centre in Oberpfaffenhofen/Germany, based on the premises of the DLR's space operations centre, will be in charge of control/operations. The Centre will also coordinate European experiment operations.

Graduated in aeronautical engineering at the French Air Force Academy of Salon-de-Provence in 1979. Qualified as a fighter pilot in Tours in 1980 and graduated from France’s test pilot school (EPNER) in Istres in 1988.

Having graduated in aeronautical engineering and qualified as a fighter pilot, was assigned in 1980 to an operational Jaguar A squadron in Istres Air Force Base (France). In 1985 was appointed flight commander at Saint-Dizier Air Force base.

Léopold Eyharts has logged 3800 hours’ flying time on over 50 types of aircraft and 21 parachute jumps including one ejection. He holds a commission as General in the French Air Force.

In 1990 he was selected to be an astronaut by the French national space agency (CNES) and was assigned to support the Hermes spaceplane programme managed by the Hermes Crew Office in Toulouse. He also became one of the test pilots and engineers in charge of the CNES parabolic flight programme (using Caravelle aircraft) and also carried out Airbus A300 zero-g qualification flights.

Léopold Eyharts underwent two short-duration training sessions at the Yuri Gagarin Cosmonaut Training Centre near Moscow in 1991 and 1993. He took part in an evaluation of Russian Buran space shuttle training in Moscow, where he flew in the Tupulev 154 Buran in-flight simulator.

In 1992 he was a candidate for European Space Agency astronaut selection.

In July 1994 he was assigned as back-up crew member for the Franco/Russian Cassiopée mission, which took place in August 1996.

In December 1996 he was selected as cosmonaut for the CNES follow-on space science mission Pegase, which took place from 29 January to 19 February 1998.

In August 1998 he joined ESA's European Astronaut Corps, whose home base is the European Astronaut Centre (EAC) located in Cologne/Germany. He was assigned to train at NASA’s Johnson Space Center in Houston/Texas and joined the 1998 Mission Specialist Class.

Léopold Eyharts received technical assignments within NASA’s Astronaut Office at JSC/Houston. He is currently working in the ISS Operations Branch as a section chief for ISS systems, software and onboard information technology.

Mission to the Russian space station Mir (29 January to 19 February 1998). During this Franco/Russian mission Pegase, he performed various French experiments in the area of medical research, neuroscience, biology, fluid physics and technology.