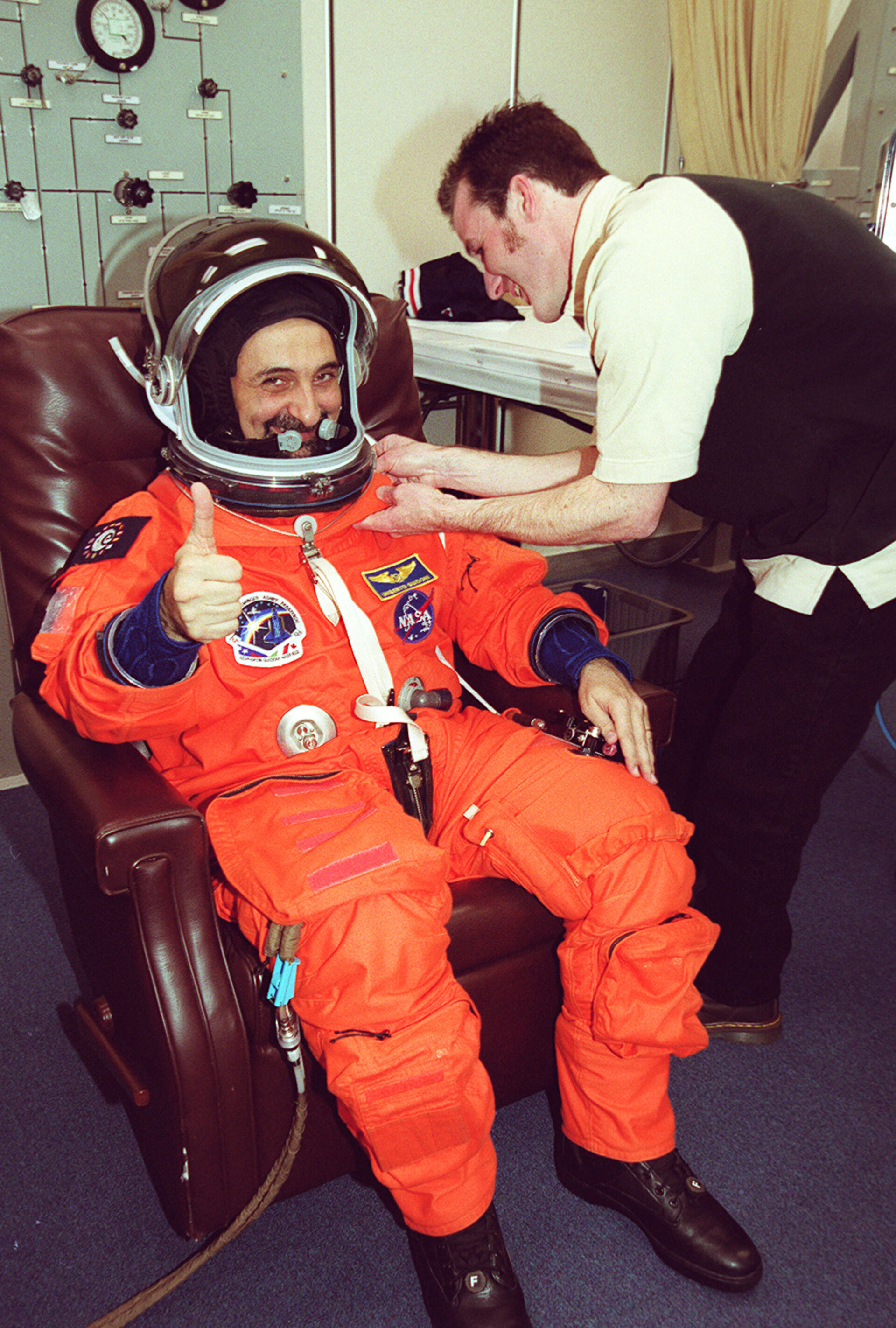 Some time after the Space Shuttle Endeavour docks with the ISS on 21 April, Italian-born physicist Umberto Guidoni will be the first European astronaut to board the station. For the European Space Agency, it will be a symbolic moment. But there will be nothing symbolic about the 46-year-old Guidoni's share of the mission workload, or the Raffaello logistics module in the Shuttle's cargo bay - another major European contribution to the ISS.

Guidoni is well qualified to be Europe's first representative aboard. He has worked as a scientist in space-related fields since he took a doctorate in astrophysics from Rome University in 1978. And he is no stranger to Earth orbit.

By 1988, he was a leading scientist on an Italian Space Agency (ASI) project: tethered satellites. In collaboration with NASA, ASI were planning an orbital test. There would be a chance for two of the Italian team to fly their own experiments into space. Says Guidoni, "I applied more out of curiosity than because I thought I had any chance of being selected. I wasn't even sure that I could pass the medical."

In fact, he passed with flying colours. With colleague Franco Malerba, he found himself in Houston training as a Payload Specialist. He was backup for the first tethered satellite experiment in 1992, and four years later he flew aboard the shuttle Columbia on a second, more ambitious mission.

During the experiment, a small satellite was reeled out from the shuttle by an insulated cable some 20 kilometres long. As the tether cut through the Earth's magnetic field at orbital velocity, a powerful electric current was generated - "like a gigantic dynamo."

Despite a near disaster, the ambitious 1996 experiment turned out successfully. Guidoni was able to log currents and voltages higher than anticipated until a short-circuit abruptly melted the tether cable just before maximum run-out. "It was dramatic, but not dangerous," he says. "The cable broke at its base, and the satellite went into an orbit 70 kilometres higher." In fact, the short-circuit inadvertently demonstrated another theory: "It's possible to move a satellite from one orbit to another without using any propellant.

For Guidoni, the satellite experiment was an exhilirating experience. "After that," he says, "I had so much fun in space that I decided to make a career out of it."

The European astronaut did just that. He stayed on in Houston to train as a fully qualified Space Shuttle Mission Specialist and since August 1998 has been a member of ESA's European Astronaut Corps, based in Cologne.

By coincidence, Endeavour will launch almost exactly 40 years after Yuri Gagarin made the world's first manned spaceflight on 12 April, 1961 - an anniversary no astronaut is likely to forget. Back then, the young Russian risked his life on untested equipment in an uutterly unknown environment. His prime duty was to survive his mission.

Forty years on, the ISS is a comfortable laboratory in space where scientists will be able to do serious work. "The first astronauts had to have extraordinary levels of physical fitness," says Guidoni. "Now, the most important qualifications are scientific. The physical training comes second, after you've been selected." He adds, "Over the next few years, journeys to the ISS will become steadily more routine, and we have already made great strides in that direction."

Not only technology has changed since the day that Gagarin's capsule was bolted to the upper stage of a modified nuclear missile. His 1961 flight was made at the height of the cold war, as part of a vicious East-West competition. The ISS by contrast was born from a great partnership of nations, with Europe at its heart. "We are building something in space that is really for all humankind."