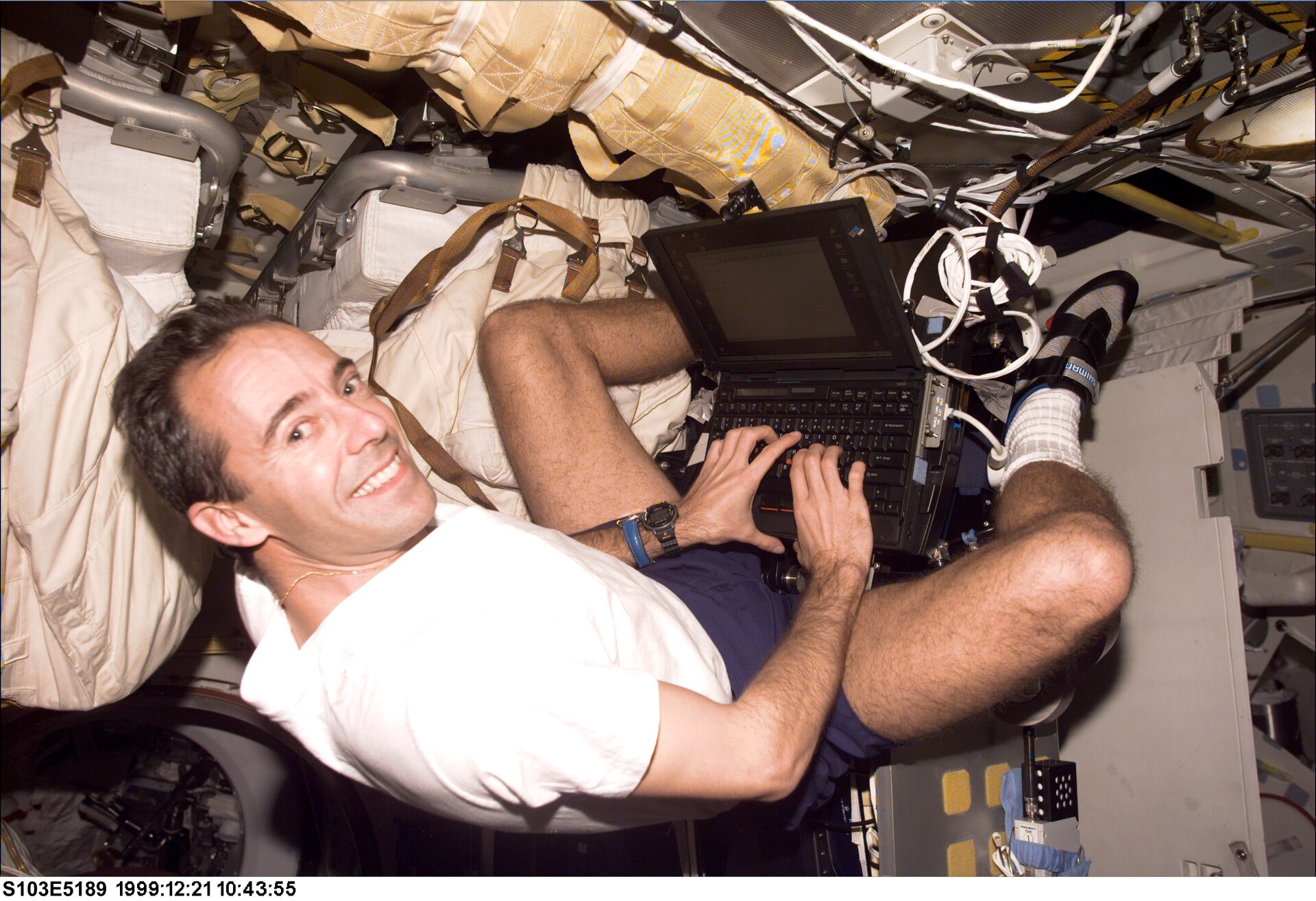 Born on 19 November 1958 in Longeville-les-Metz, France Jean-François Clervoy considers Toulouse, France, to be his adopted hometown. He is married to Laurence Boulanger and they have two children. Jean-François enjoys racquet sports, skill games, canyoning and skiing. He also likes playing with boomerangs, frisbees and kites. His mother lives near Paris, France.

In 1983 Jean-François was seconded from the Délégation Générale pour L’Armement (DGA) to French space agency CNES where he works on autopilot systems for various projects such as the SPOT Earth observation satellite, the STAR optical intersatellite space link and the Vega comet probe.

He was selected for the second group of French astronauts in 1985 and started intensive Russian language training. From 1987 to 1992 he directed the parabolic flight programme at the Flight Test Center in Brétigny-sur-Orge, France, and provided technical support to the European human space programme within the ESA Hermes crew office in Toulouse.

Jean-François flew twice on the Space Shuttle Atlantis and once on Discovery, spending a total of 675 hours in space.

From 2001 through 2008 he was assigned as Senior Advisor Astronaut for ESA’s Automated Transfer Vehicle in Les Mureaux, France. In 2008, he was appointed member of the selection board for the new ESA astronaut class, and became coach of the new class during their first year of training.

From 2006 to 2011, Jean-François became Chairman and CEO of Novespace, subsidiary of the French space agency CNES in charge of parabolic flights on the Airbus A310 Zero-G aircraft. He continues as Chairman.

Jean-François is author of the book Histoire(s) d’Espace about his mission to repair the Hubble space telescope.

Jean-François filed an international patent for the time functions of the Speedmaster Skywalker X-33 wristwatch produced by Omega, tested and certified by ESA. He is an Omega ambassador.

STS-66. 3–14 November 1994: the Atmospheric Laboratory for Applications and Science-3 (ATLAS-3) mission was part of a programme to determine Earth’s energy balance and atmospheric change over an 11-year solar cycle. Jean-François used the Space Shuttle’s robotic arm to deploy the atmospheric research satellite Crista-SPAS 20 hours after liftoff, and logged 262 hours and 34 minutes in space over 175 Earth orbits.

STS-84, 15–24 May 1997: NASA’s sixth Space Shuttle mission to dock with Russia’s Mir space station. As payload commander, Jean-François’ primary tasks were to run more than 20 experiments, operate the docking system and the Spacehab module as well as transfer 4 tonnes of equipment between Space Shuttle Atlantis and Mir. He trained as backup spacewalker on this mission. Jean-François logged 221 hours and 20 minutes in space over 144 Earth orbits.

STS-103. 19–27 December 1999: the primary objective was to repair the Hubble space telescope. It was put into hibernation after a series of failures of its gyroscopes, required to meet very precise pointing requirements. Jean-François was flight engineer for ascent, rendezvous and entry. He used the robotic arm to capture and redeploy the telescope, and to manoeuvre his crewmates during their three spacewalks. All the spacewalks lasted more than eight hours. Jean-François logged 191 hours and 11 minutes in space over 120 Earth orbits.

Jean-François retired from the European Astronaut Corps in December 2018, after more than 33 years of active astronaut duty.

Since 2013 he has chaired the jury of the Space for Sustainability award. He is also honorary president of Novespace, a subsidiary of France's space agency CNES in charge of the parabolic flight programme with an Airbus A310 Zero-G flying from Bordeaux-Mérignac, France. Jean-François is founder and ambassador of Air Zero-G that organises weightless flights for customers: www.airzerog.com.