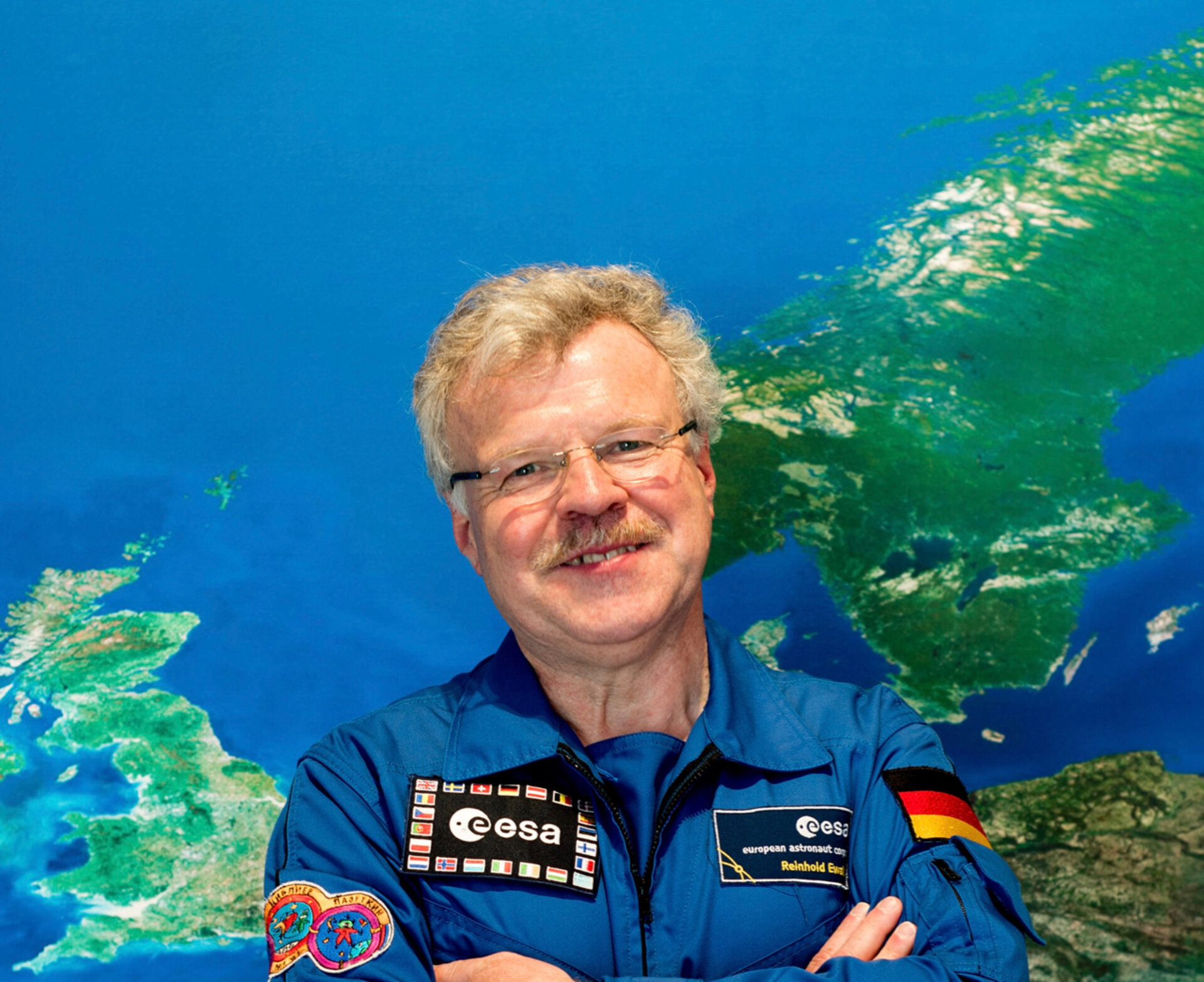 Born 18 December 1956 in Mönchengladbach, Germany, Reinhold Ewald is married and has three children. He enjoys reading and spending time with his family and performs with an amateur theatre group. He also plays football and holds a black belt in karate.

Reinhold received a Bachelor of Science degree in Physics from the University of Cologne in 1977 and has a Master of Science in Experimental Physics in 1983. He graduated in 1986 with a PhD in Physics and a minor degree in human physiology.

Reinhold is a member of the Deutsche Physikalische Gesellschaft (German Physics Society) and the Association of Space Explorers. He is a Full Member of the International Academy of Astronautics.

Reinhold received Russia’s Order of Friendship in 1992 and Russia’s Medal for Personal Courage in 1997, awarded by President Yeltsin of the Russian Federation. In 2011 he received the Russian medal for Achievements in Spaceflight. He was awarded the German Federal Cross of Merit (First Class) in 1997.

From 1983 to 1987 Reinhold was a research scientist with the University of Cologne on a German academic research federation (Deutsche Forschungsgemeinschaft) project to assemble and use a 3 m-diameter radio telescope at the Gornergrat Observatory at an altitude of 3100 m near Zermatt, Switzerland. His research topic was the structure and dynamics of interstellar molecular clouds, which are thought to be the birthplace of new stars.

In 1987 Reinhold joined the DLR German Aerospace Center. He managed several projects in extraterrestrial science, including the SOFIA airborne stratospheric observatory, and various experiments launched on sounding rockets from the Esrange facility in Sweden. He then became the coordinator for spaceflight in DLR’s planning department.

In 1990 he joined the German national astronaut team and took up training for the German–Russian Mir ’92 mission at the Gagarin Cosmonaut Training Centre in Star City, Russia. As backup astronaut for Mir ’92, launched 17 March 1992, he served as Crew Interface Coordinator at the Russian mission control centre, TsUP, in Korolev, providing communications between the crew in orbit and the project management and scientists on the ground.

After the mission, he returned to Germany as the Deputy Head of DLR’s Astronaut Office and supported the Spacelab-D2 mission on the Space Shuttle mission STS-55, April–May 1993.

In 1993 Reinhold was appointed assistant to the Director of DLR’s Space Programme. He was responsible for extraterrestrial, spaceflight and microgravity programmes.

In 1995 he returned to Star City, Russia, to train for the second German–Russian mission, Mir ’97.

In 2005 he was appointed Head of the International Space Station Mission Integration and Operations Division in the ESA Directorate of Operations and Infrastructure with a permanent duty station at the Columbus Control Centre near Munich, Germany, From July to December 2006, as ESA’s Operations Manager, he supervised preparation and flight operations for the first long-duration mission of an ESA astronaut on the International Space Station. The Astrolab mission with ESA astronaut Thomas Reiter was a precursor to Columbus operations.

Reinhold led the ESA operations management team during the STS-122/1E mission, which delivered Europe’s Columbus laboratory module to the Station in February 2008. When Columbus operations began in 2008 and until March 2011 Reinhold was ESA’s lead person at the Columbus Control Centre and interacted with the Industrial Operations Team and their representatives in Mission Integration, Executive Planning and Mission Operations services to assure adherence of operations to ESA’s Space Station programme. As head of ESA’s International Space Station Mission Integration and Operations Division, he oversaw day-to-day Columbus operations handled by the group’s Mission Directors.

After serving as Advisor to the Head of Director General’s Cabinet at ESA’s headquarters in Paris (2011–14), Reinhold promoted the scientific achievements of the ESA research programme on the International Space Station, working at the European Astronaut Centre. in Cologne. On 1 September 2015 he was appointed as Professor for Astronautics and Space Stations at the Institute of Spaceflight System at University of Stuttgart on secondment from ESA.

Mir ’97 was the second German–Russian mission on Russia’s Mir space station, from 10 February to 2 March 1997. Reinhold was a research cosmonaut on the Russian Soyuz TM-25 spacecraft and spent 18 days on Mir. He performed experiments in biomedical and material sciences and carried out operational tests to prepare for missions to the International Space Station. He returned in Soyuz TM-24.

Reinhold retired from ESA in September 2018.