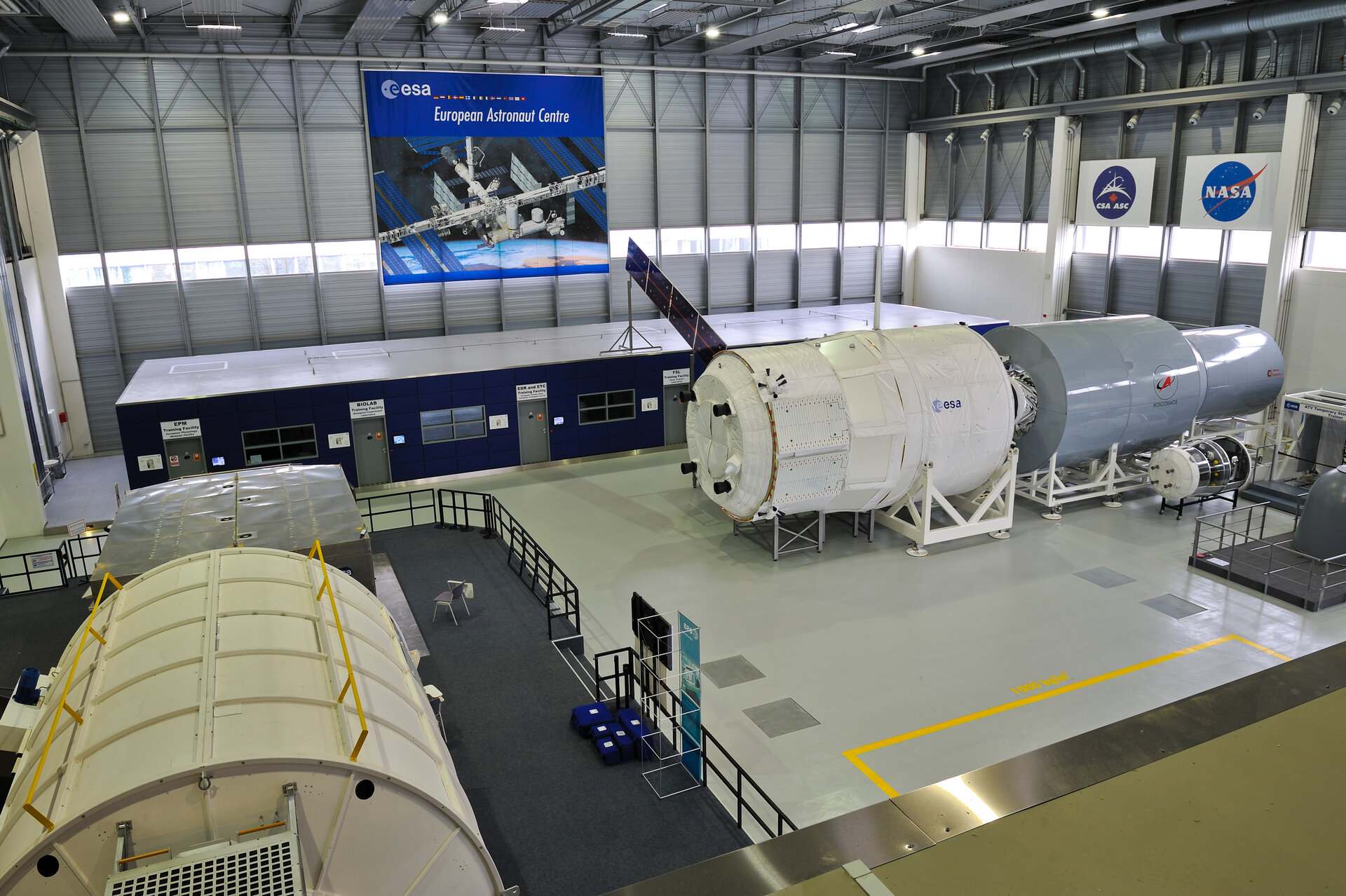 The European Astronaut Centre (EAC) was established in 1990 and is located near Cologne, Germany. The EAC team is made up of more than 100 professionals, complemented by staff from the German Aerospace Centre (DLR), the French space agency CNES and from industry.

Led by ESA astronaut Frank de Winne, EAC reinforces the European commitment to human space programmes. Through its determined work over the last decades, EAC has established itself as a centre of excellence for astronaut selection, training, medical support and surveillance, as well as support of astronauts and their families during preparation for and during flight.

Activities include the selection and recruitment of new ESA astronauts, the planning and scheduling of their tasks and flight assignments, and the preparation and implementation of astronaut training programmes for space missions to the International Space Station (ISS).

For astronauts and for the ground operations personnel, EAC is the training centre for all European built ISS hardware, including ESA's Columbus laboratory and payloads, as well as for astronaut operations for the Automated Transfer Vehicle (ATV).

EAC has established its medical expertise for astronauts including preventive medicine, evidence based medicine, nutrition and fitness. In addition, EAC provides public relation assistance for human spaceflight and educational activities, as well as promoting opportunities to industry for commercial experiments.

After its foundation in 1990, three ESA astronauts were based at EAC. They were selected in 1978 for the first Spacelab mission on the US Space Shuttle in 1983. ESA stronaut Ulf Merbold (Germany) flew on that mission. Wubbo Ockels (Netherlands) flew on the Spacelab D1 mission in 1985. Claude Nicollier (Switzerland) completed his first mission on Space Shuttle flight STS-46 in 1992. Nicollier participated in three further Shuttle missions in 1993 (STS-61), 1996 (STS-75) and 1999 (STS-103). Nicollier became the first European to perform an Extra Vehicular Activity (EVA, more commonly known as a spacewalk) during a Shuttle mission.

In 1998, ESA member states took the decision to join the forces of the national astronaut teams and to reinforce the European identity through a single European Astronaut Corps, a process, which was concluded in 2002 with a Corps of 16 astronauts. Today, EAC is the home base of ESA's 14 astronauts.

Since the EAC took its first steps, the list of missions completed by European astronauts and supported by the EAC has grown considerably. In spite of the limited access to the ISS during the years 2003 through 2005 due to the Columbia accident, ESA managed to continuously fly ESA astronauts to the International Space Station with Soyuz missions.

European presence in space and the progress of space research carried out by European institutions and companies could be secured. With the Space Shuttle’s return to flight in 2005, Europe’s engagement in human spaceflight featured historic moments with 2 missions in 2006: Thomas Reiter (Germany) was the first European astronaut participating on a long duration flight as ISS Expedition crew (flight engineer 2 of Expeditions 13 and 14), spending nearly six months on orbit for ISS operations and experiments in weightlessness.

Christer Fuglesang (Sweden) joined Reiter on the ISS on a Shuttle flight in December 2006 for performing important EVA activities. This was the first time in the ISS eight-year history that two Europeans met together on the International Space Station.

2007 saw the beginning of the most intense period of human spaceflight activity in Europe. Paolo Nespoli (Italy) brought the European-built Node 2 connecting module to the ISS on the STS-120 mission in September 2007. The attachment of Node 2 paved the way for the arrival of ESA's cornerstone contribution to the ISS, the Columbus laboratory.

Hans Schlegel (Germany) and Léopold Eyharts (France) brought Columbus to the ISS on the STS-122 mission in February 2008, where it was attached to Node 2. Schlegel participated in one spacewalk during the STS-122 mission and was instrumental in the attachment of Columbus. Eyharts became the first European astronaut to fly a long-term mission on Columbus. During his stay he activated the laboratory and conducted the first experiments from the European microgravity science programme inside Columbus.

That good training pays off was demonstrated with the docking of ATV Jules Vernein April 2008. The ISS crew were trained on ATV docking at EAC before their mission to the Space Station.

ESA's current plan is to have a European astronaut flying an ISS increment every 2 years starting with the launch of Columbus, up to the Station's lifetime of 2015 and beyond. This human activity on ISS will be the best way to prepare ESA for human exploration of Moon and Mars in cooperation with our partners.

To date, EAC’s years of intense work for human spaceflight has created a unique human, technical, operational and scientific expertise in this field to be found nowhere else in Europe. To foster this for Europe’s future, in May 2009, EAC selected six new astronauts following a year-long recruitment campaign. The new ESA astronauts started their basic training at EAC on 1 September 2009.