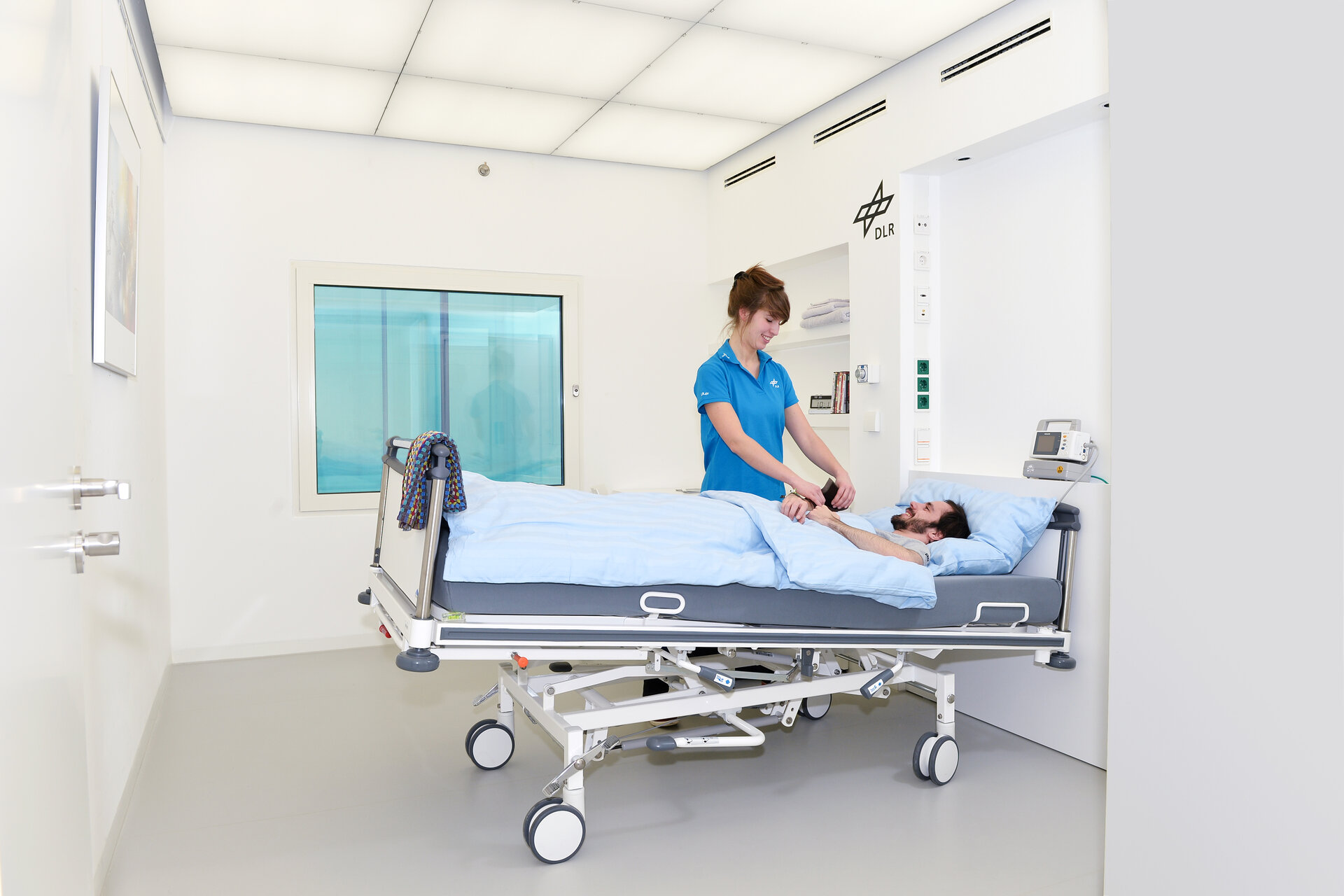 On 9 September, the first of 12 men will go to bed for 60 days as part of important research into stopping the wasting effects that spaceflight has on the human body. Although they may be putting their feet up, it is set to be a far from relaxing experience.

Bedrest studies involve lying in bed at an inclination of 6° so that your head is lower than your body – at least one shoulder must touch the bed at all times. Similar to bedridden people on Earth, astronauts in space suffer as their bones and muscles lose strength from underuse.

ESA regularly organises bedrest studies of varying lengths, with both men and women. Conducted in cooperation with the German Aerospace Center, DLR, or the French centre at MEDES in Toulouse, they find ways of counteracting symptoms of spaceflight such as bone loss and changes in blood flow.

This year’s bedrest study is the first long-duration study to be run at the German Aerospace Center’s ‘:envihab’ facility in Cologne, Germany. The building offers medical researchers state-of-the-art equipment and where everything from daylight to temperature and humidity can be regulated over the course of the 60-day lie in.

DLR is organising and running this study and has also recruited those participating in the experiment.

Located next to ESA’s astronaut centre, Alexander Gerst returned to :envihab last year to recuperate from his five-month Blue Dot mission on the International Space Station.

Twelve scientific groups have planned about 90 experiments that will examine insulin resistance, the cardiovascular system, how the brain copes with the upside-down rest, and that will also test how effective simulated gravity is on specific organs.

Two weeks before and two weeks after the study, the participants will be measured to chart changes in their bodies.

A ‘Reactive Jumps’ study will use a newly-developed exercise device that allows subjects to ‘jump’ in a horizontal position as well as in space using low-pressure cylinders to recreate gravity. The experiment targets bone, muscle and coordination. This is the first time that reactive jumping will be tested as a way of avoiding the loss of bone and muscle.

“Organising month-long scientific studies is a huge task and aside from coordinating the researchers from all over Europe, choosing the test-subjects is extremely important as the success of the study depends on their commitment,” said Jennifer Ngo-Anh, ESA’s Head of Human Research Office.

The participants must be as healthy as a typical astronaut, but also willing and able to remove themselves from their daily lives for 60 days. Their motivation is often to further science and do their part for future space exploration.

Spare a thought for these unsung heroes of spaceflight who will spend the next 60 days in bed having frequent blood tests, little privacy and constant monitoring – all in the name of science.