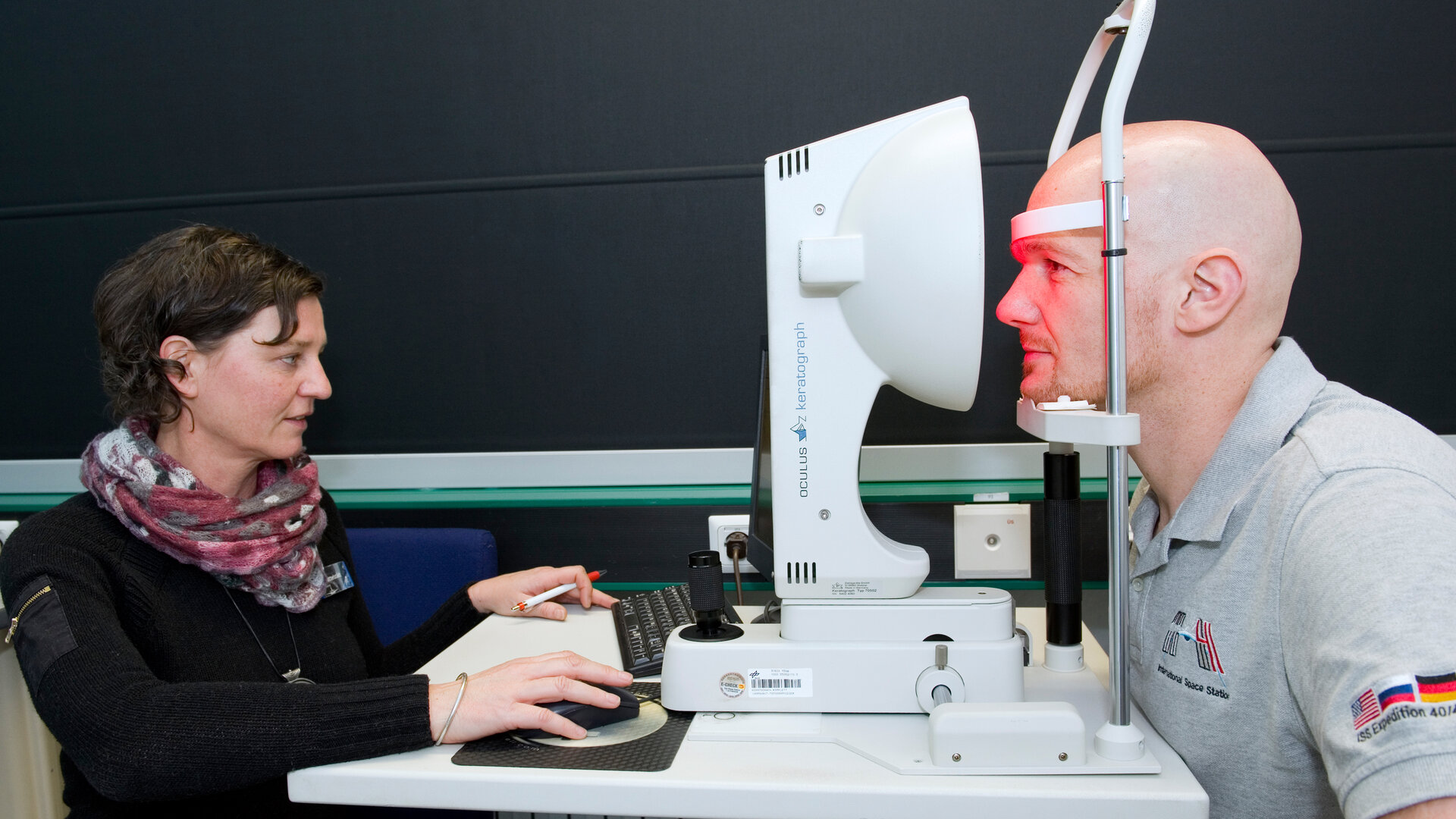 Where bones connect they are protected by cartilage, which reduces friction and absorbs shock. Our bodies do not repair damaged cartilage well, leading to painful joints and some forms of arthritis.

Researchers know that to keep cartilage healthy it must be used regularly under load. Overexertion, however, can damage the tissue and it is unclear what is the ideal level of exercise.

This experiment investigates the effects on cartilage of living in space. As astronauts in microgravity have little to no pressure on their joints, it is expected that Alexander will lose some of his cartilage. To test the theory, this experiment is scanning astronaut’s knees by MRI before and after their mission to see changes in their cartilage.

Our bodies know roughly what time of day it is, making us feel sleepy at night. Our biological clock follows Earth’s 24‐hour cycle but reacts to sunlight. In our modern world, many people live outside of the natural cycle, staying up late or working night shifts. As a result, problems with sleeping are common but not fully understood.

Astronauts experience 16 sunrises and sunsets every day on the International Space Station as it circles Earth. The Station offers a unique place to study circadian rhythms. No other place near Earth offers 90-minute days that put a serious strain on people’s body clocks.

How his biological clock reacts is of interest to the next generation of astronauts as well as people on Earth who work irregular hours such as doctors and emergency workers. The data will be shared and compared with studies in isolation such as ESA’s Mars500 and in places that experience the opposite to short days, such as the four months without sunlight at the Concordia research base in Antarctica.

The Circadian rhythms experiment measures an astronaut’s temperature and melatonin, a hormone linked to sleep. Alexander’s readings are measured continuously using Thermolab, a new and patented sensor that monitors temperature without impractical thermometers.

The findings will help in finding out how to rest effectively and be alert when most needed, a skill that many would benefit from, especially astronauts who need to be ready for spacecraft dockings at irregular intervals.

Scientists want to know how to feed people on missions to Mars. Planning an 18-month mission to the Red Planet requires accommodating all hardware and supplies down to the kilogram. This experiment sets out to ask: how much food does an astronaut need for 18 months in space?

Imagine an astronaut growing hungry and running out of energy during a critical moment, such as a Mars landing.

This experiment looks at the energy expenditure of astronauts during spaceflight to plan adequate but not excessive food supplies. It is a complex experiment and many astronauts are involved. ESA astronauts André Kuipers and Luca Parmitano and others took part in this experiment on their missions before Alexander.

The space part of this experiment lasts 11 days. Predefined food is eaten from a special package on the first two days and everything is registered with bar codes and on written forms to know exactly what Alexander ate. He drank water with deuterium isotopes and regularly collect water and urine samples. The isotopes allow the scientists to examine how Alexander’s energy levels changed over the 11-day period. Our skin protects us, regulates our temperature and allows us to feel objects. As we grow older, our skin becomes more fragile and takes longer to heal from injuries. Astronauts lose more skin cells and age faster during spaceflight. A common complaint of astronauts is cracking skin and rashes or itchiness.

This experiment uses data already collected by ESA astronaut Luca Parmitano and was the first research into skin in space. Skin-B collects data on skin structure, oxygenation, hydration and elasticity. The goal is to develop a computer model of how skin ages. Results on Alexander’s skin will improve the model and could contribute to protecting people’s skin on Earth as well as in space.

Almost three-quarters of astronauts suffer from headaches in space, usually worse in the first few weeks in space. Described by some as ‘exploding’, the headaches are unlike anything felt on Earth. This could be bad news for space tourists who spend a short time in space and want to enjoy it as much as possible.

This experiment investigates the headaches astronauts experience through regular questionnaires. Alexander filled in a questionnaire regularly to study the number of headaches he had on the Station. The researchers are looking to understand the causes. Are they linked to the fluid movement to the head in microgravity? Is there a link between headaches on the ground and in space?

ESA astronaut André Kuipers was the first test subject on the PromISSe mission in 2012, while ESA astronaut Luca Parmitano and other colleagues continued collecting data on their headaches. The headaches are classified and analysed according to the International Classification of Headache Disorders.

An astronaut’s perception and reaction time deteriorate in space, which is a worrying thought when conducting complex spacewalks or robotic operations with expensive space hardware. This experiment tries to understand the relationship between gravity and depth perception.

Reversible symbols such as ‘p’ and ‘d’ are ambiguous. Depending on how you look at the symbol, they can be seen in different ways. Alexander was set as a backup subject for this experiment. Five astronauts looked at 2D and 3D reversible figures before, during and after their mission. Each time they told the researchers what they recognised on first view and when it changes to the other view – if at all.

This research will help understand how the brain processes ambiguous information and will help ESA to plan complex operations in space better.

Humans are adaptable beings. Wear glasses continuously that turn your view of the world upside-down and inside two weeks your brain will have adapted to the upside-down world – everything will seem normal again.

Researchers suspect that astronauts’ brains adapt to living in weightlessness by using previously untapped links between neurons. As the astronauts learn to float around in their spacecraft, left–right and up–down become second nature as these connections are activated.

To confirm this theory up to 16 astronauts will be put through advanced MRI scanners before and after their spaceflight to study any changes in their brain structure. A control group on ground will undergo the same scans for further comparison.