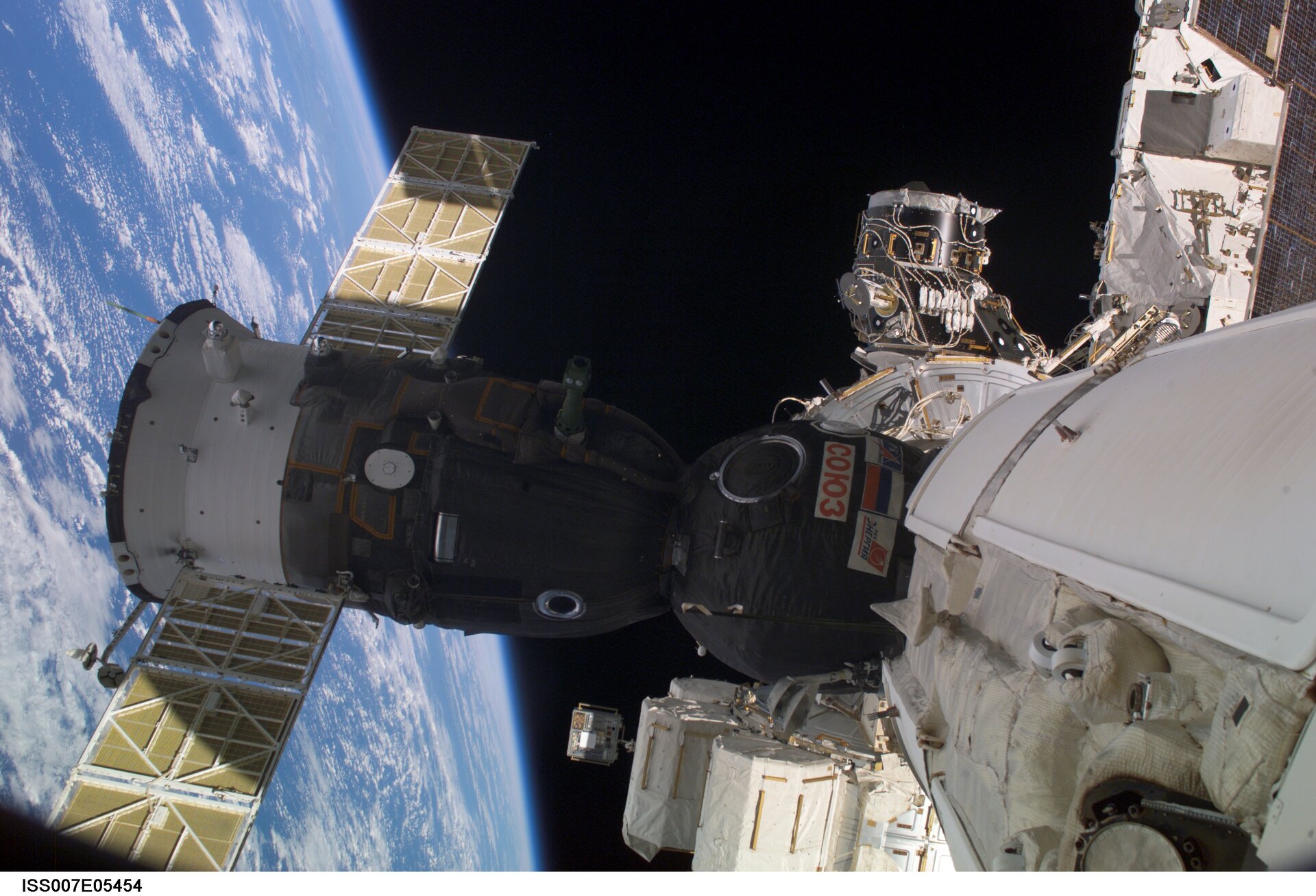 Pedro Duque woke up at about 07:00 CEST (05:00 UT), as usual, and after breakfast at 08:30 (06:30 UT), he devoted most of the morning to the NEUROCOG experiment and an interview with Spanish public television channel TVE.

After lunch from 13.00 to 14.00 (11:00 to 12:00 UT), Pedro and the ISS Expedition Seven crew - US astronaut Ed Lu and Russian cosmonaut Yuri Malenchenko — had several hours of training to prepare for the trip back to Earth in the Soyuz TMA-2 capsule.

Many communication activities planned for today. Wake-up time is as 07:00 CEST (05:00 UT), and breakfast with the rest of the crew one hour later.

The first job of the day is an interview with Spanish TV channel Antena 3. Then Pedro works in the experiment Crew Restraint (aimed at testing new crew-restraint equipment), before anther TV interview with Tele-5.

Before lunch, which is at 13:00, there's time to take pictures and videos, among other activities. A detail: all five crewmembers eat the same.

In the afternoon the schedule includes some work on ROOT (plant molecular biology) and AGEING (the experiment about ageing in fruit flies). At about 16:20 Pedro began working on the educational experiment VIDEO-2, which aims to explain Newton Laws to schoolchildren.

Pedro slept very well last night. He was awake at 07:00 CEST (05:00 UT) and after using the bathroom, he had breakfast together with the rest of the crew until about 08:40 (06:40 UT). After downlinking some video material, the daily planning conference was held with the Control Centre.

The rest of the morning Pedro worked on Neurocog, a neuroscience experiment that investigates human spatial perception. He also took some photos and shot some more video material.

From about 19:30 CEST (17:30 UT) Pedro will devote time to PROMISS, an experiment on protein crystallisation. After that, dinner with the rest of the crew, and then more work, in this case NANOSLAB which studies the formation of zeolites.

Aznar was at the Moncloa Palace, in Madrid, with the Spanish minister of Science and Technology, Juan Costa. Eight students from the School of Aeronautical Engineering of Madrid Polytechnic University were also present. Aznar said to Duque: "We are very proud of you being up there", and he committed himself to continued support of the ISS programme.

Aznar conveyed to Duque the support of the people of Spain for his work. He went on to praise Pedro for how he inspires young people and for what he represents in this mission. Duque emphasized the importance of the scientific research, "that is what makes it possible for humanity to have a good standard of life".

The students asked Pedro Duque about daily life in orbit. The students themselves have experience of carrying out experiments in weightlessness – they recently participated in one of ESA's annual student parabolic flight campaigns.

Pedro Duque has a full schedule today. He woke up this morning at about 07:10 CEST (05:10 UT), feeling well. Pedro is in very good shape, no headaches and no space sickness.

During the rest of the morning Pedro participated in the experiments Sympatho, BMI and Cardiocog. Pedro also downlinked video material that was shot when the Soyuz TMA-3 was approaching ISS for docking and another clip of himself while one of his crewmates took a sample of blood from him.

This afternoon Pedro will keep working on Cardiocog for about 2 hours; then he will devote some time to Nanoslab and to BMI. Activities for this afternoon include filming the behaviour of fruit flies for AGEING, a Spanish experiment.