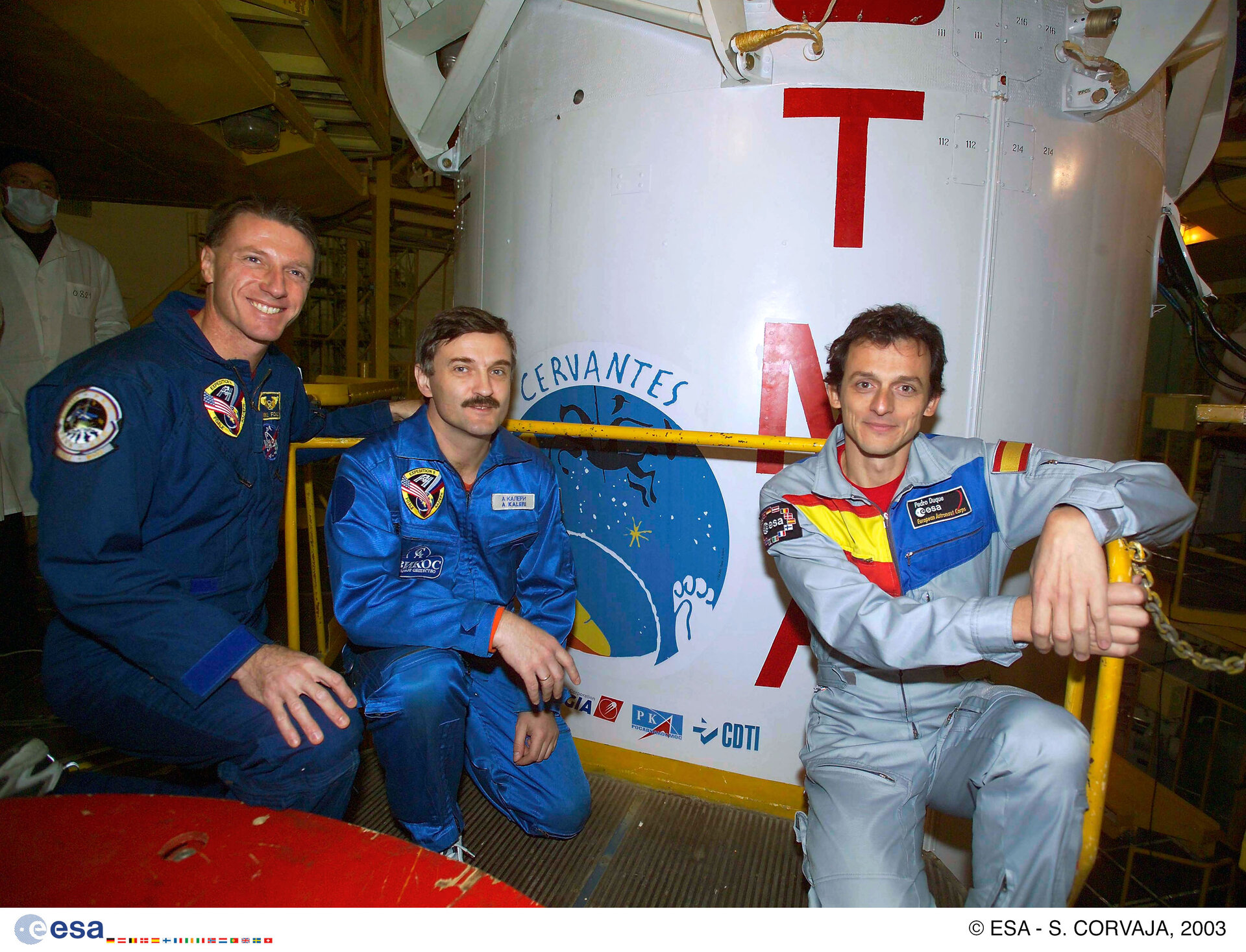 ESA PR 65-2003. On 18 October the Soyuz TMA-3 spacecraft launched from the Baikonur Cosmodrome in Kazakhstan at 11:37 local time, 07:37 CEST, will be carrying the European Space Agency astronaut Pedro Duque to the International Space Station (ISS) on Soyuz flight 7S, accompanied by the two members of ISS Expedition 8 crew.

Duque, a member of ESA’s astronaut corps since 1992, becomes the sixth European, and first Spaniard, to visit and work on the International Space Station.

His mission takes its name from Miguel de Cervantes (1547-1616), author of Don Quixote. The main purpose of this 10-day mission is to carry out an extensive scientific programme comprising a series of experiments in the fields of life and physical sciences, Earth observation, education and technology. Most of these will be performed by Duque in the Russian part of the Station; others in NASA’s Destiny laboratory, including use of the Microgravity Science Glovebox, a scientific research facility developed in Europe.

“A trip into space is not something you can do every day”, said Duque, “so I am determined to use every moment to the fullest and perform the various experiments as proficiently as possible. I am proud to be representing almost 40 million Spanish citizens”.

From a European perspective the Cervantes mission is also important because it increases ESA’s astronaut experience ahead of the launch of Columbus, Europe’s own laboratory, to the Space Station. Pedro Duque has worked previously on the development of Columbus. He reviewed its design in terms of operability and maintainability and checked on ergonomic aspects of its structure. The ongoing development of Columbus and its research facilities will benefit from the ‘hands on’ experience he will get during his stay on the ISS.

Other important objectives of the Soyuz 7S/Cervantes mission are to exchange the ISS Expedition crews and the Soyuz TMA-2 spacecraft currently attached to the ISS.

Duque will be Flight Engineer in the Soyuz TMA-3 on the ascent phase to the ISS, taking an active role in piloting the spacecraft. The other crew members are Russian Rosaviakosmos cosmonaut Alexander Kaleri, the Commander, and NASA astronaut Michael Foale. Kaleri and Foale, the ISS Expedition 8 crew, will stay on the station for approximately six months. Two days after launch the Soyuz TMA-3 will approach and dock with the orbiting complex some 400 km above the Earth.

Duque’s flight is sponsored by the Spanish Ministry of Science and Technology, through the Centre for the Development of Industrial Technology (CDTI). It was organised under a framework agreement between ESA and the Russian space agency Rosaviakosmos, covering flights for European astronauts.

“Through the continued cooperation of the ISS partners we are now looking forward to a productive and beneficial future for all parties involved in the International Space Station”, said Mr Jörg Feustel-Büechl, ESA Director of Human Spaceflight. “By bringing the Cervantes mission to fruition, the European Space Agency is showing its determination to continue expanding the frontiers of research in human spaceflight and fostering international cooperation and friendship”.

The Cervantes mission was originally planned for April this year, but in the aftermath of the Columbia accident, ESA was asked by the partners in the Space Station programme to forgo that flight opportunity and make a crew exchange possible. ESA agreed to give up its seat and postpone Pedro Duque's flight to October.

The Cervantes mission follows the Odissea mission in October/November 2002, with ESA’s Belgian astronaut Frank De Winne, and is the fourth in a series of European manned Soyuz missions to the Space Station.

Since October 2002, Duque has spent most of his time training at the Gagarin Cosmonaut Training Centre in Star City, near Moscow, with additional mission-specific training at ESA’s ESTEC facility in Noordwijk, the Netherlands, and at the Johnson Space Center in Houston.

This will be Duque’s second mission in space. He flew as Mission Specialist on the STS-95 mission on the Space Shuttle Discovery (29 October to 7 November 1998), a nine-day mission dedicated to solar research. Now aged 40, he joined the the ESA astronaut corps over a decade ago. He will find this mission on a Russian Soyuz rocket very different from his maiden spaceflight on the Space Shuttle.

Unlike his first mission, Duque’s journey to the International Space Station will require hands-on involvement in the piloting of the Soyuz spacecraft from the moment of lift-off.

“The training methods for the Shuttle and Soyuz are very different. On the Shuttle we were like passengers and work only began once we had arrived in orbit,” observes Duque.

Dutch ESA astronaut André Kuipers is the backup astronaut for the Cervantes mission and is himself scheduled to fly on a Dutch Soyuz mission scheduled for April next year.

You can find further information on the Cervantes mission and follow the launch event live at: http://www.esa.int/cervantes.

The launch will also be transmitted live to Europe via satellite by the ESA Television Service. For transmission times and details, please contact:http://television.esa.int