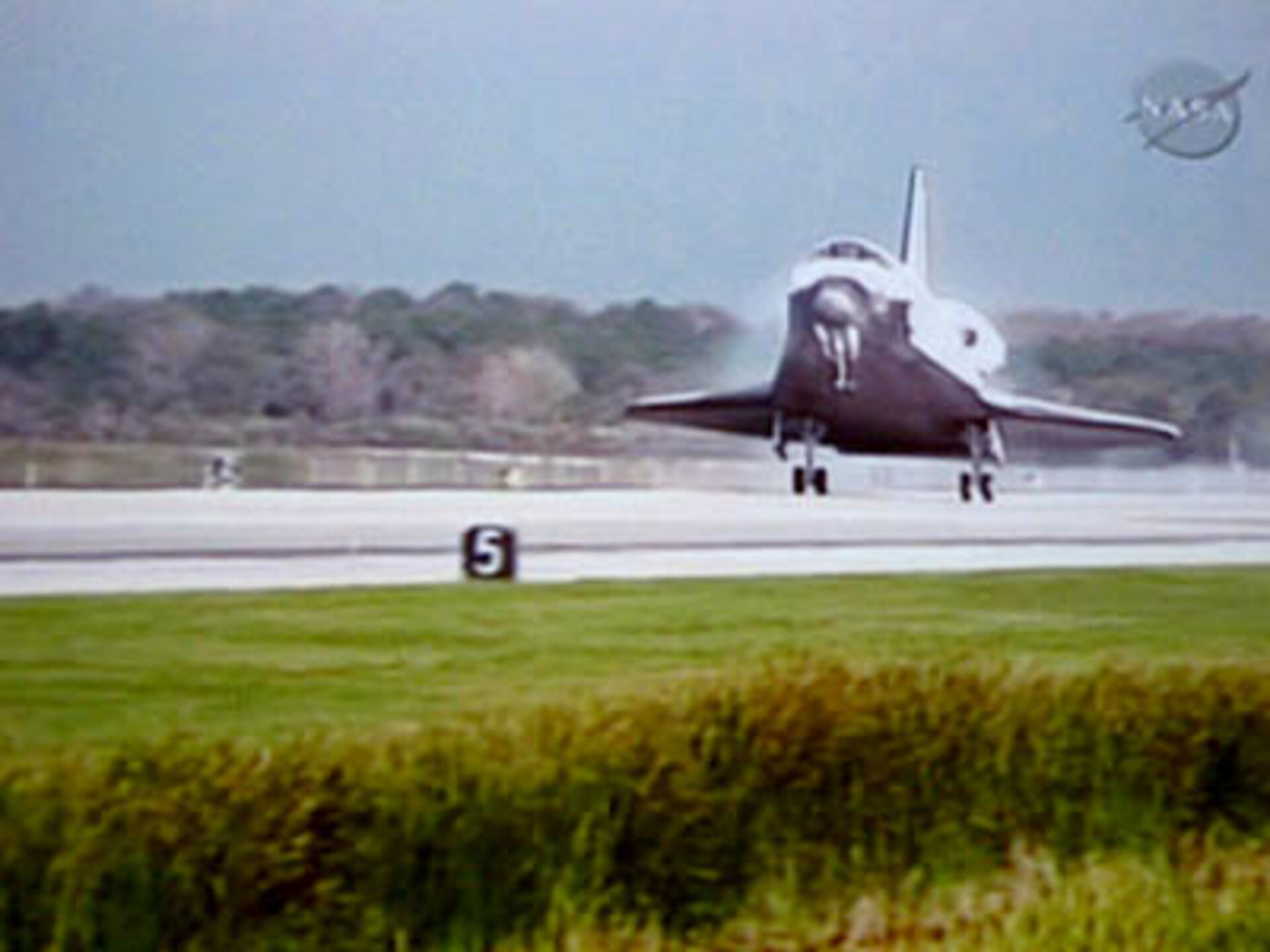 ESA PR 10-2008. NASA’s space shuttle Atlantis, which successfully delivered ESA’s Columbus laboratory to the International Space Station, has safely returned to Earth with its crew of seven. Landing was at 14:07 UTC (15:07 CET) on 20 February at Kennedy Space Center, Florida.

On this STS-122 mission, the shuttle spent nearly 13 days in space, including 9 days docked to the Station to conduct a major ISS assembly task: delivery of Europe’s first permanent human outpost in orbit. The 7-m long 12.8-tonne Columbus module, a state-of-the-art multidisciplinary laboratory, was attached to the Harmony (Node 2) module on 11 February.

Once leak checks and initial electrical, fluid and data connections were completed, the module’s hatch was opened on 12 February, marking Europe’s new status as a full partner and co-owner of the ISS. Outfitting work inside Columbus began only a few hours later, as the laboratory entered its commissioning phase, which was commanded and controlled by the Columbus Control Centre (Col-CC) located in Oberpfaffenhoffen near Munich, Germany.

Two ESA astronauts, Hans Schlegel of Germany and Léopold Eyharts of France, were ferried to the Station by Atlantis and both contributed directly to this success. As a member of the STS-122 crew, Hans Schlegel performed one of the three spacewalks during the mission with fellow astronaut Rex Walheim of NASA. He also coordinated the other two spacewalks, supporting the Columbus module’s transfer from the shuttle payload bay to the ISS, plus the transfer of two payload suites, SOLAR and EuTEF, to external platforms on the Columbus module. Hans Schlegel returned to Earth with Atlantis.

After formal crew responsibility hand-over tasks following the docking of Atlantis with the Station, Léopold Eyharts became part of the resident ISS crew (Expedition 16), trading places with NASA astronaut Dan Tani. He provided support for Columbus docking from inside the Harmony module, activating the motorised bolts to secure the junction, and assisted the third spacewalk by operating the station’s robotic arm.

Unlike Schlegel, Eyharts remained on the ISS when Atlantis undocked two days ago. He will spend the next month in space to complete the Columbus module’s commissioning and to perform a series of experiments, both in the laboratory and in the other science facilities already operating in the Station. Léopold Eyharts is scheduled to return to earth with the next shuttle ISS mission (Endeavour/STS-123), at the end of March.

ESA builds up its contribution to the ISS

With the addition of Columbus, the pressurised volume of the Space Station was increased by a mere 15%, but its science capacity was nearly doubled. Two modules of the Japanese laboratory will be added in March and May, and a Russian Multi-Purpose Laboratory Module (MLM) will follow in 2011.

A new era is also beginning for ESA’s activities onboard. As a fully-fledged partner of the ISS programme, ESA will now not only enjoy the benefits of Columbus but will also have to contribute to ISS operations. This will be achieved through the launch of unmanned servicing missions carried out by the Automated Transfer Vehicle, designed to deliver speares, scientific experiments, crew support equipment (food, clothing), fluids and propellant and to perform reboost to compensate for orbital decay of the ISS. The first ATV, Jules Verne, will be launched by an Ariane 5 on 8 March.

But ESA will also benefit from the Station by conducting experiments within its many science facilities, and by regularly sending European astronauts to perform long-duration stays onboard as members of the resident crew. Two ESA astronauts are already training for such missions: Frank de Winne of Belgium who will fly as a member of the ISS Expedition 19 crew in 2009; and André Kuipers of the Netherlands who will be his backup. More will follow.

Further European-built ISS elements are still under preparation to be launched to the ISS within the decade, such as the Material Science Laboratory (MSL), the Muscle Atrophy Resistive Exercise System (MARES), the European Robotic Arm (ERA), the Node 3 module and the Cupola observation deck.

As Columbus is coming to life, so too is the network of nine User Support and Operations Centres (USOCs), which has been set up all over Europe to facilitate the interface between researchers and the science payloads onboard, and to allow investigators to control their experiments and receive real-time data on their results, through an interconnection provided via the Columbus Control Centre.

Commissioning of the European laboratory has proceeded well and faster than planned. The two external payloads SOLAR and EuTEF have been deployed outside Columbus and already provide data. WAICO, the first experiment to be conducted inside the lab, will start this week inside Biolab. The Geoflow experiment will start up in early March inside the Fluid Science Laboratory.

Over the coming weeks and months, the USOC network’s activity will increase dramatically as the science equipment and experiments already onboard Columbus are commissioned and switched to operational status, and as more science payloads are delivered to the module by the upcoming logistics missions.

Columbus was designed to support some 500 experiments per year for ten years, in cell and plant biology, astrobiology, human physiology, fluid and material sciences, fundamental physics, astronomy, remote sensing and technology. For the European science community and industrial R&D, a new era of research has just begun.