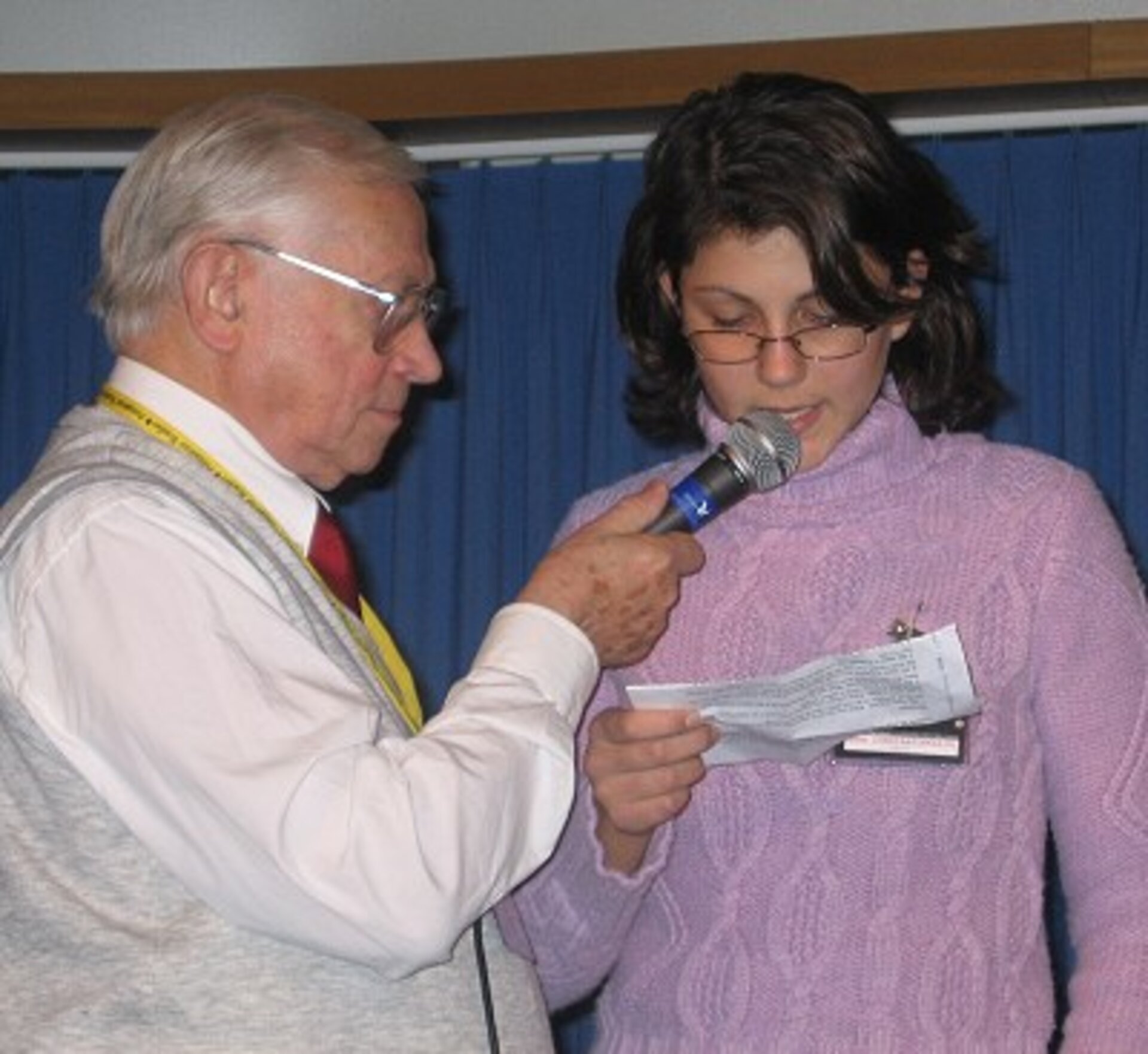 During the Science on Stage Festival at CERN, in Geneva, Switzerland, as a reward for supporting ESA in the production of the ISS DVD Lesson series, a group of 26 students and their teachers from six European secondary schools used amateur radio to talk live to NASA astronaut Bill McArthur on board the International Space Station (ISS).

In the three DVDs the students from Belgium, Denmark, Greece, Italy, Norway and Portugal, are seen performing scientific experiments about the effects of weightlessness on the human body, and the different properties and states of matter.

Gaston Bertels, European Chairman of the Amateur Radio Association ISS (ARISS), first explained how a radio contact with the ISS is made and after some nervous moments, a live connection was finally established.

During a ten-minute window, the students asked current ISS Commander Bill McArthur a series of scientific questions, such as the question asked by Eleni from Greece; "In what way can human spaceflight contribute to the study of environmental and ecological problems, such as the ozone hole or greenhouse effect?"

A complete list of the questions is included at the end of the article. If you are curious to hear Bill McArthur’s answers, click on the link to the audio file for the recording of the radio contact.

A video clip showing highlights of all three ISS DVD Lessons produced so far was also screened at the event. A student from each of the six schools explained what they liked about working on the scientific experiments shown in the DVD, what they had learned and what their expectations were for the future of space research and exploration:

Pedro Ramos from the Escola Secundaria da Amadora, Portugal, explained how much his school had enjoyed participating in the recordings of the third DVD Lesson about the different states of the matter: “It helped us to understand how matter behaves in other environments, besides Earth. We are proud to have participated in this project because we consider that this is an important contribution for teaching science in high schools all over Europe”.

The DVD’s have been produced for use in the classroom and to encourage group exercises for students aged 12 to 18. The DVD Lesson series is available in twelve European languages. Fill in the order form to register for a free copy.

The ISS DVD Lesson series was produced thanks to the support of the ISS Education Fund (ISSEF). ISS Education Fund board members also attended the event at CERN and took the opportunity to meet with the students and hear what they thought about studying science in this way.

In her closing words Linda Duevel, the newly appointed Chair of the ISS Education Fund, called on the students to use their experience to promote science amongst children in their local communities.

The ISS Education Fund has been set up to enable organisations and individuals to support educational activities using the ISS as a tool to encourage youngsters to study science and technology. If you are interested in joining the ISSEF, visit http://www.esa.int/issef.

My name is Shana. When you are up in space, looking down at the Earth, can you see the air pollution or do you need a special device? OVER

My name is Sanne. The calcium in the bones of astronauts is being broken down as fast as on Earth but bone tissue is very slowly produced. Why is this? OVER

My name is Hans. What protects a shuttle against the dangerous radiation of sun flares? When they are powerful can’t they get through the protection shields? OVER

My name is Mark. When I sleep I turn around in my bed to be comfortable. Do you turn around when you sleep in space? OVER

My name is Mark. When did you become interested in spaceflight? OVER

My name is Sofie. Do you feel safe in space or are you afraid of accidents? OVER

My name is Anna-Maria. What can the astronauts eat in the Space Station? Are there any restrictions in their diet? OVER

My name is Eleni. In what way can human spaceflight contribute to the study of environmental and ecological problems, such as the ozone hole or greenhouse effect? OVER

My name is Apfroditi. What are the qualifications that somebody needs in order to become an astronaut? OVER

My name is Vassil. When you look outside of the ISS what is similar to looking outside of an airplane and what is totally different (besides floating)? OVER

My name is Valerio. How long is your stay in orbit? Do you have some privacy? How many are you together and what space do you have in total? OVER

My name is Frederik. Are you able to watch extreme weather on the earth from the ISS? OVER

My name is Sarah. Is it possible to see damages on the earth, like earthquakes, oil spills or reduction of rain forests? OVER

My name is Jannicke. Can you describe what it’s like to walk outside the ISS, to repair something for instance? OVER

My name is João. What was the biggest difficulty that you have experienced in space so far? OVER

My name is Monica. Do you now feel the same person you were before going into space? OVER

My name is Sofia. How is the supply of Oxygen regulated in the Space Station? OVER