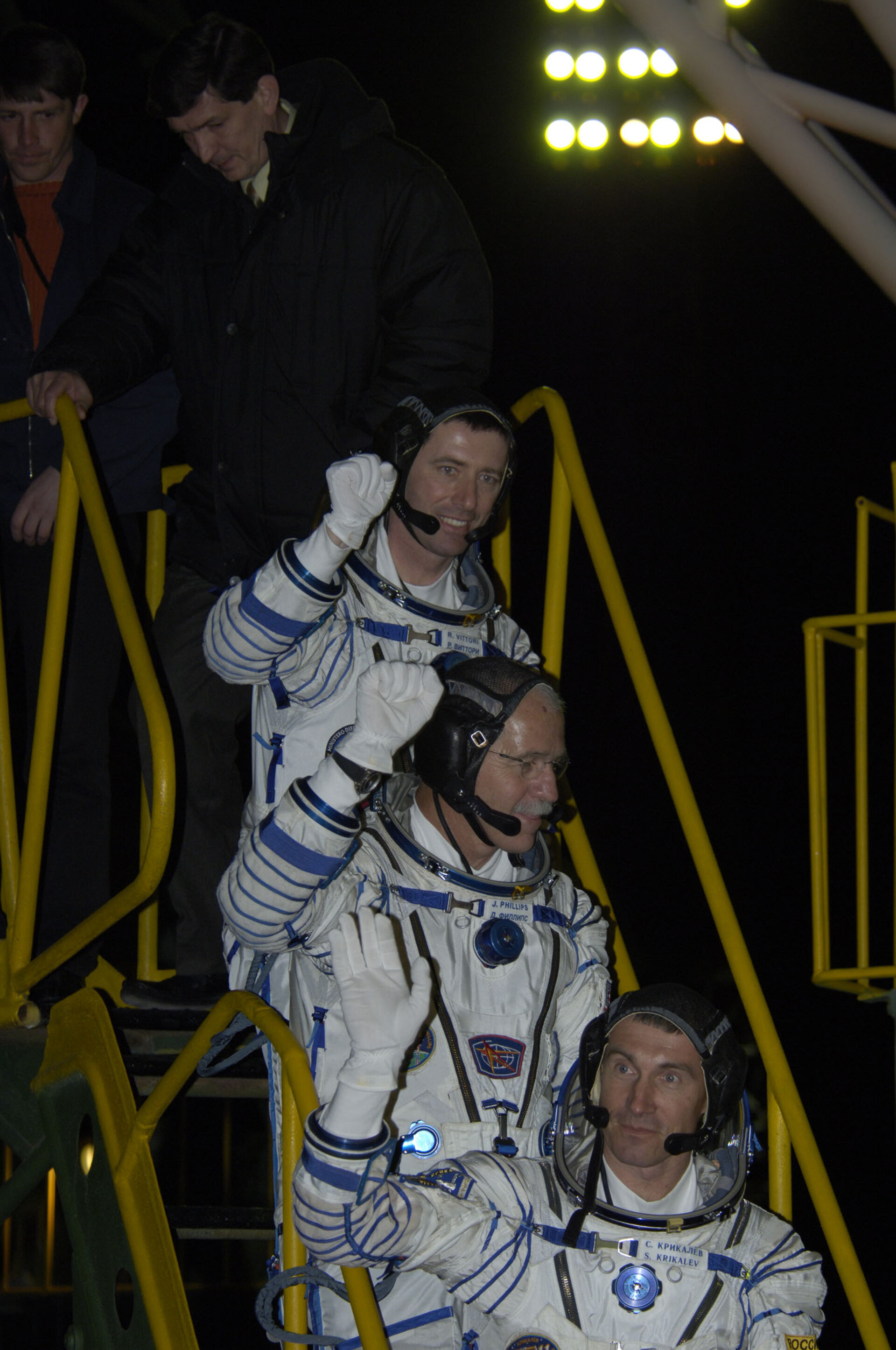 Baikonur, 14 April 2005, 23:30 local time. A dark night in the Kazakhstan desert. Leaving the cosmonaut hotel I am greeted by many friends and family from Italy who are here to see the launch.

We quickly board the bus. We are joined by a very few selected people. During the trip, as is tradition, there is a special video prepared for each of us. John Phillips' is about his 54th birthday, which is today. My video shows my wife and children, Valeria, Edoardo, Davide and Enrico.

We arrive at the building where final preparations take place. We put on the Sokol suit, the scafander that protects us during launch and re-entry in case we lose pressurization. It takes some time.

We have a press conference with the president of the Russian Space Agency, Mr Perminov. Daniel Sacotte from ESA was also present, together with Mr Berselli representing the Italian Minister of Defence.

We then move to the launch site. The bus stops in a place protected from view, here repeat another ritual tradition that was initially done 44 years ago Yuri Gagarin, just before his first flight, a toilet stop.

Finally we arrive at the rocket. We climb the five steps to the launch pad lift. We turn around; pausing for a last greeting to those assembled around the rocket – they are kept at a distance by a protective fence.

We climb into the lift. The rocket is about 55 metres tall. At the top there are a few engineers to help us. I go first. The Soyuz is completely dark. I turn on the light, and start to take position in the left chair. John arrives next. Sergei is last.

We are in, all strapped in and ready. We try the systems, and we wait. It is somewhat similar to being in the simulator. But at times the rocket appears to warm up its muscles in preparation for the run. At times, sounds and vibrations of the capsule remind us that we are not in a simulator, but in the real rocket.

Inside everything starts to vibrate. At the beginning it is almost unnoticeable. Then it becomes more and more evident, up to the point that you ask yourself if the system will indeed remain stable.

The rocket engine has three different stages that work at different altitudes. The entire run from the Earth's surface to an altitude of 200 km is about 9 minutes long. In those 9 minutes there are three stages of the engine that light up and shut down in turn. The acceleration is most noticeable toward the very end of the run.

Half way to space and the protective metal cover around the Command Module is ejected. The explosion and then the flood of light that enters the two small circular windows surprise us.

With the shutdown of the last stage, inside everything quickly turns quiet. Then I realise, there is something strange; all objects are floating. We are there - we are in microgravity.