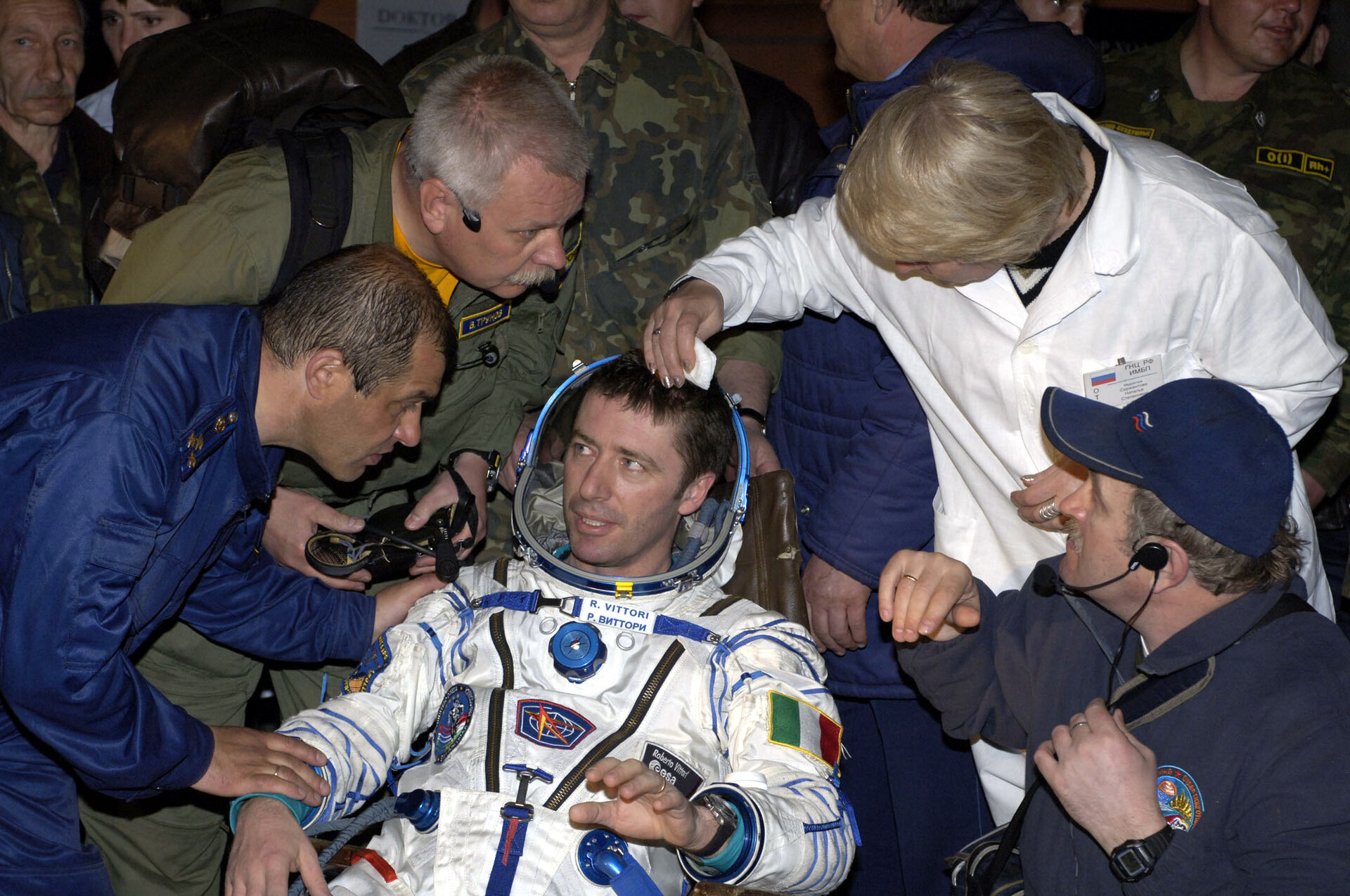 ESA PR 22-2005. The Eneide Mission to the International Space Station (ISS) has come to a successful end with the landing of ESA astronaut Roberto Vittori, accompanied by the ISS Expedition 10 crew.

The command module of the Soyuz TMA-5 spacecraft touched down near the town of Arkalyk in Kazakhstan at 04:07 local time (00:07 Central European Summer Time) on Monday 25 April.

All the major objectives of the mission, which lasted ten days, including eight days on the ISS, were achieved. The experiment programme was successfully completed, and the ISS Expedition crew was exchanged along with the Soyuz TMA-5 spacecraft, which has been stationed at the ISS for the past six months, serving as the crew lifeboat.

The hatches between the returning Soyuz TMA-5 and the ISS were closed at 17:34 CEST on Sunday 24 April, and the crew then carried out standard procedures and checks prior to undocking. At 20:44 CEST Soyuz TMA-5 undocked from the ISS, with Vittori, as Flight Engineer, taking an active role in the re-entry, descent and landing operations, alongside Russian cosmonaut Salizhan Sharipov, the Soyuz Commander. Sharipov and the Soyuz 2nd Flight Engineer Leroy Chiao (NASA) were the returning Expedition 10 crew, having been stationed on the ISS since 16 October 2004.

All stages of the re-entry went according to plan. Soyuz TMA-5 went through module separation, prior to re-entry, with the spacecraft’s utility and instrument-assembly modules being uncoupled from the command module and burnt up in the Earth’s atmosphere. The command module containing the crew took a different flight profile to the other modules, entering the Earth’s atmosphere three hours after undocking at 23:44 CEST. The main parachute of the command module opened at 23:53 CEST with the landing taking place in the dark before dawn at 04:07 local time in Kazakhstan, 00:07 CEST, on Monday 25 April.

During the Eneide Mission, Roberto Vittori carried out a programme comprising 22 on-orbit experiments in the fields of biology, human physiology, technology and education. Many of these were developed by Italian researchers and built by Italian industry and research institutions. Scientists from Denmark, Germany, Russia, Switzerland, the USA and from ESA were also involved in the programme.

Mission control for the Eneide Mission was performed by an ESA Operations Team from the new Columbus Control Centre on the premises of the German Aerospace Center DLR at Oberpfaffenhofen, near Munich, Germany, who provided all essential coordination and decision-making functions for the mission in close cooperation with the ISS partner control centres in Moscow, Houston and Huntsville (Alabama), the Lazio User Centre at the Tor Vergata University in Rome, Italy, and ESA's Eneide Mission Management Team in Noordwijk, the Netherlands.

The Eneide Mission was co-sponsored by the Italian Ministry of Defence and the Region of Lazio, in the framework of an agreement between ESA and Roscosmos, the Russian federal space agency. During the mission, Roberto Vittori had numerous contacts with representatives of the Italian government, the Ministry of Defence, the Region of Lazio, the media and schoolchildren.

Each Soyuz TMA spacecraft serves not only as a crew exchange vehicle but also as an emergency return vehicle or lifeboat at the ISS. Soyuz TMA-6 will remain at the ISS with the Expedition 11 crew for the next six months. Vittori's launch from Baikonur was the sixth flight for the new Soyuz TMA series, the first having been in October 2002. With Vittori’s return and landing in Soyuz TMA-5, European astronauts have flown in all six Soyuz TMA spacecraft.

Further information on the Eneide Mission and its experiment programme can be obtained at www.esa.int/eneide and www.spaceflight.esa.int/eneide/status.