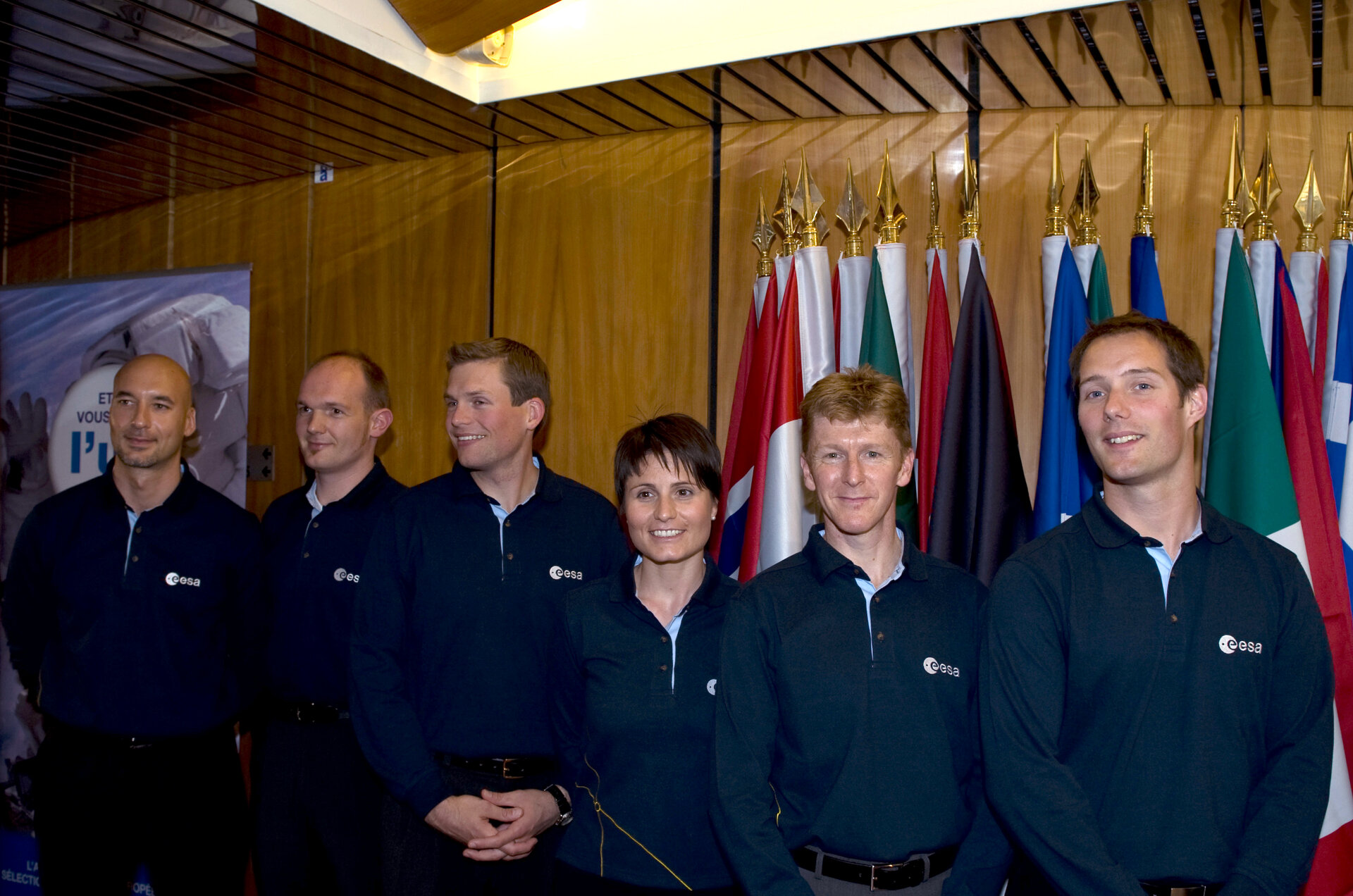 ESA PR 12-2009. ESA today presented the six individuals who will become Europe's new astronauts. The new recruits will join the European Astronaut Corps and start their training to prepare for future missions to the International Space Station, and beyond.

They were selected following a Europe-wide recruitment process that started last year. Following thorough psychological, medical and professional screening that started with 8413 valid applications, they are the first new recruits to join the European Astronaut Corps since 1992 under this second-ever astronaut selection carried out by ESA.

The choice of six was made taking into account flight opportunities planned not only under ESA programmes and activities but also those planned in the frame of a Memorandum of Understanding between the Italian Space Agency (ASI) and NASA. This was done in agreement with the Italian authorities and in accordance with the ESA Council decision in 2002 to create a single corps of astronauts in Europe.

“We are at a turning point in ESA’s human spaceflight activities. Last year, with the launch of the Columbus laboratory and the Jules Verne Automated Transfer Vehicle, ESA became a fully-fledged member of the International Space Station partnership. We are now entering a new phase of utilisation of the unique capabilities offered by the ISS and preparation for international exploration of the Moon and beyond,” said ESA Director General Jean-Jacques Dordain.

“This new phase required the recruitment of young talent able to draw on the experience gained by the existing astronauts, able to become, step by step, the representatives of Europe in space who, together with their international colleagues, will live, work, explore and bring back to planet Earth and its citizens their unique experience, their accomplishments and their confidence in the future. They all represent the generation that will move from low earth orbit to the Moon,” Dordain added.

“I am very proud of the result achieved with this selection,” said Simonetta Di Pippo, ESA Director of Human Spaceflight. “Proud, as a European, of the calibre of the candidates, proud of the organisational efforts made by ESA and in particular by the European Astronaut Centre. This result exceeds our greatest expectations. Not only do we have a group of outstanding astronauts; we also have a representation of European countries that reinforces the support for human spaceflight and exploration in Europe.” She added: “With the ISS lifetime being considered for an extension to 2020 and beyond, I believe today’s selection of six new astronauts shows where Europe stands.”

“This is a very important day for human spaceflight in Europe,” continued Di Pippo. “These young men and women are the next generation of European space explorers. They have a fantastic career ahead, which will put them right on top of one of the ultimate challenges of our time: going back to the Moon and beyond as part of the global exploration effort.”

Europe's new astronauts will start their basic training at the European Astronaut Centre (EAC) in Cologne, Germany. With ESA's ISS partners also having completed or currently finalising their own recruitment campaigns, they will also join a new class of international astronauts who will be prepared for future space missions to the International Space Station from 2013 onwards.