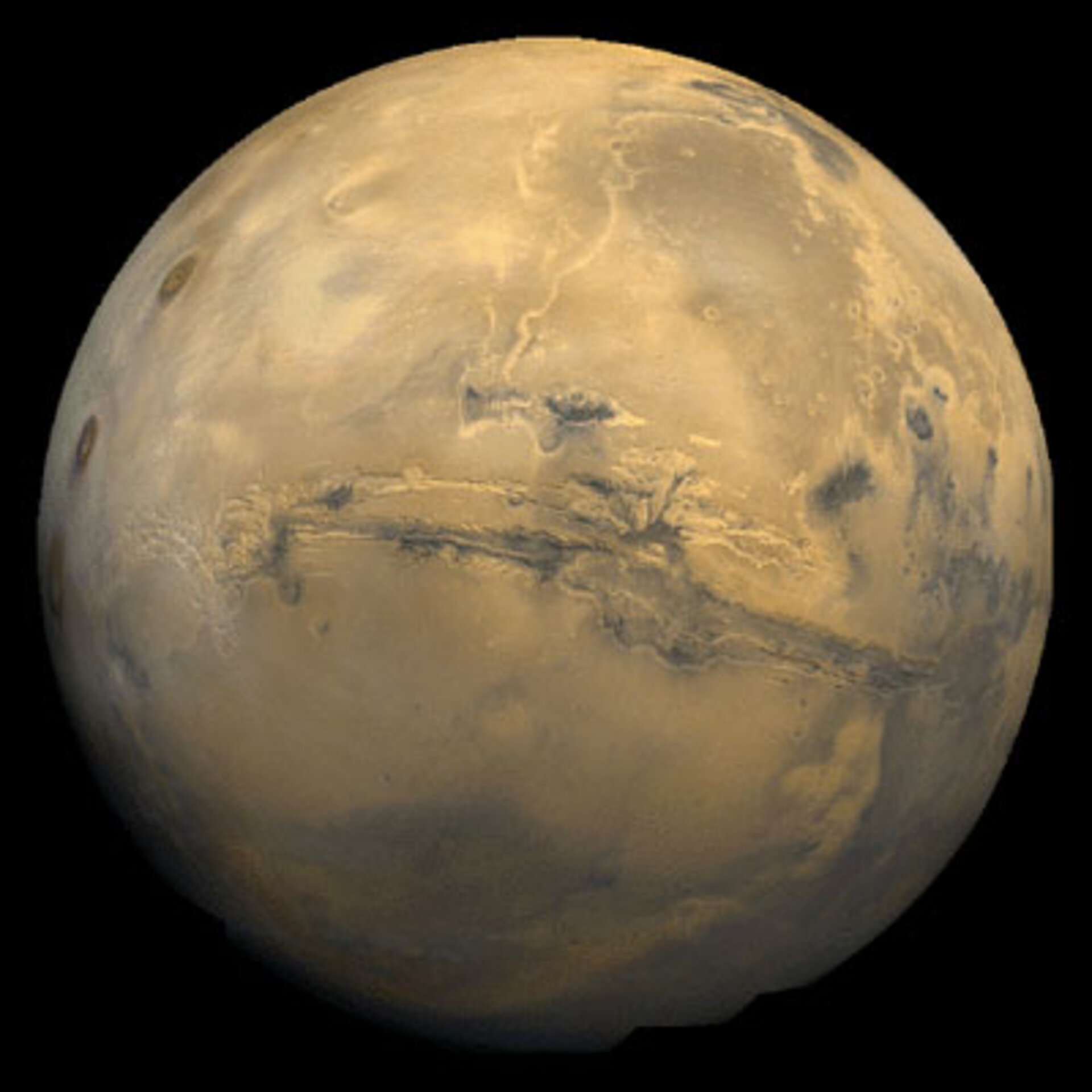 The Sun's fourth planet is the nearest thing in the Solar System to Earth's twin. Well into the 20th century, many people believed it to be inhabited; some serious astronomers as well as science fiction writers wrote much on the subject of Martians and their civilization. By mid-century, better telescopes and more careful observation had pretty well ruled out the existence of civilized Martians, but there were high hopes that the planet's seasonal colour changes were signs of growing vegetation. And if there were plants, all manner of other life might be out there.

So it is no surprise that space scientists, designers and engineers found Mars an alluring prospect right from the dawn of the space age. Apart from dreams of Martian neighbours, the planet is the most accessible from Earth: at its closest approach, it is less than 60 million kilometres away. A spacecraft on an energy-saving transfer orbit has to follow a much longer, swooping trajectory. But even so, a fairly modest amount of boost will take a spaceprobe from Earth orbit to a Mars rendezvous.

The very first Mars probes were launched by the former Soviet Union in October, 1960 - just three years after Sputnik 1. Both failed before reaching Earth orbit: 'accessible' is relative, after all, especially with first-generation space technology. But the Russians and their American rivals persevered.

The Americans made the first successful fly-by with Mariner 4 in July 1965. Mariner was a technical triumph, but it also brought disappointment. Not only were there no Martians. The planet's surface, as seen in Mariner's brief scan, was a cratered moonscape, and its 'plants' turned out to be nothing more than seasonal duststorms.

Later probes, including several landers, brought somewhat better news. True, they found that Mars is utterly arid, with a whisper-thin atmosphere - 95% carbon dioxide - that is too tenuous to protect its surface for sterilising ultra-violet radiation. And it is bitterly cold. Even on a midsummer day at the Martian equator, surface temperatures rarely reach 15 degrees; in the winter night, they fall to around -130. As for life: when NASA's 1976 Viking landers tested the Martian soil for biological activity, they found nothing definite.

But almost forty years of robotic exploration have revealed a fascinating world of deep valleys and huge, extinct volcanoes, where ice-crystal clouds sometimes linger in a salmon-pink sky. So the attraction remains. Mars is still the most Earth-like of the planets. The Martian environment may be inhospitable, but it is far more welcominging than the searing surface of Venus. A Mars day is close to the earthly 24 hours and the planet has a matching tilt, so there are Martian seasons and even weather patterns that correspond at least a little to our own. And the question of Martian life is still far from settled.

Mars is dry today. But spacecraft photographs - the entire planet has been mapped from orbit - show that water most likely once flowed on its arid surface. There are many etched river valleys and boulder-strewn flood plains that have no other easy explanation. Clearly, Mars was once much warmer. Even if the planet bears no life today, it may have done so in its youth. Possible fossil bacteria have already been found in a meteorite of Martian origin: there may be plenty more waiting for us on Mars itself.

There may be more than just fossils, too. For years, planetary scientists have been asking themselves: where did all that water go? Much of it probably evaporated into space. But there is some evidence that some at least is still there, underground. If so, there is a good chance that Martian life has gone underground with it: Earth has plenty of bacteria that could thrive in similar conditions, and life is nothing if not tenacious.

The search for life is a major element of all present and future Mars missions, including ESA's Mars Express which entered Martian orbit on 25 December 2003. In the longer term, it's also of interest to ESA's Aurora Programme, which has the task of taking human spaceflight beyond the ISS and out into the solar system over the next thirty years. Along the way, Aurora will be guiding the development of improved soft-landing technology and broadband interplanetary communications, as well as sophisticated robot science packages. But there is a limit to what robots can do. As a step towards its prime goal, Aurora might consider a sample return mission that could bring Mars rocks back for more thorough analysis on Earth.

"Ideally, we want to bring back not just any random rock," says ESA's Franco Ongaro. "We want to be able to tell the spacecraft: 'That rock over there!'" If Aurora comes up with those broadband communications - and without them the mission is likely to be impossible - the Internet will allow millions of people to share the adventure.

A Mars Sample Return mission might also involve our first attempt at interplanetary exploitation. Instead of lugging propellant for the return trip all the way from Earth, the lander systems could include technology that would generate rocket fuel from Martian resources.

Ultimately, though, Mars exploration plans should result in an even greater adventure - a human mission. Astronauts are vastly more capable than even the smartest robot, but they are also vastly more difficult and expensive to transport. Unlike robots, they eat and breath; and if their environment is too uncomfortable, they can become tetchy and depressed. For a human Mars expedition to be possible, new technologies will have to be developed and tested: not only soft-landing methods and in-situ fuel processing, but life-support engineering for a long haul far from home and perhaps entirely new rocket systems, possibly based on new types of propulsion, which will reduce the time spent coasting through space.

A human Mars mission, perhaps with the Moon as a first target or even as a way station to the Red Planet, would represent the culmination of the programme's efforts. And just incidentally, it would also guarantee that there was life on Mars: human life.