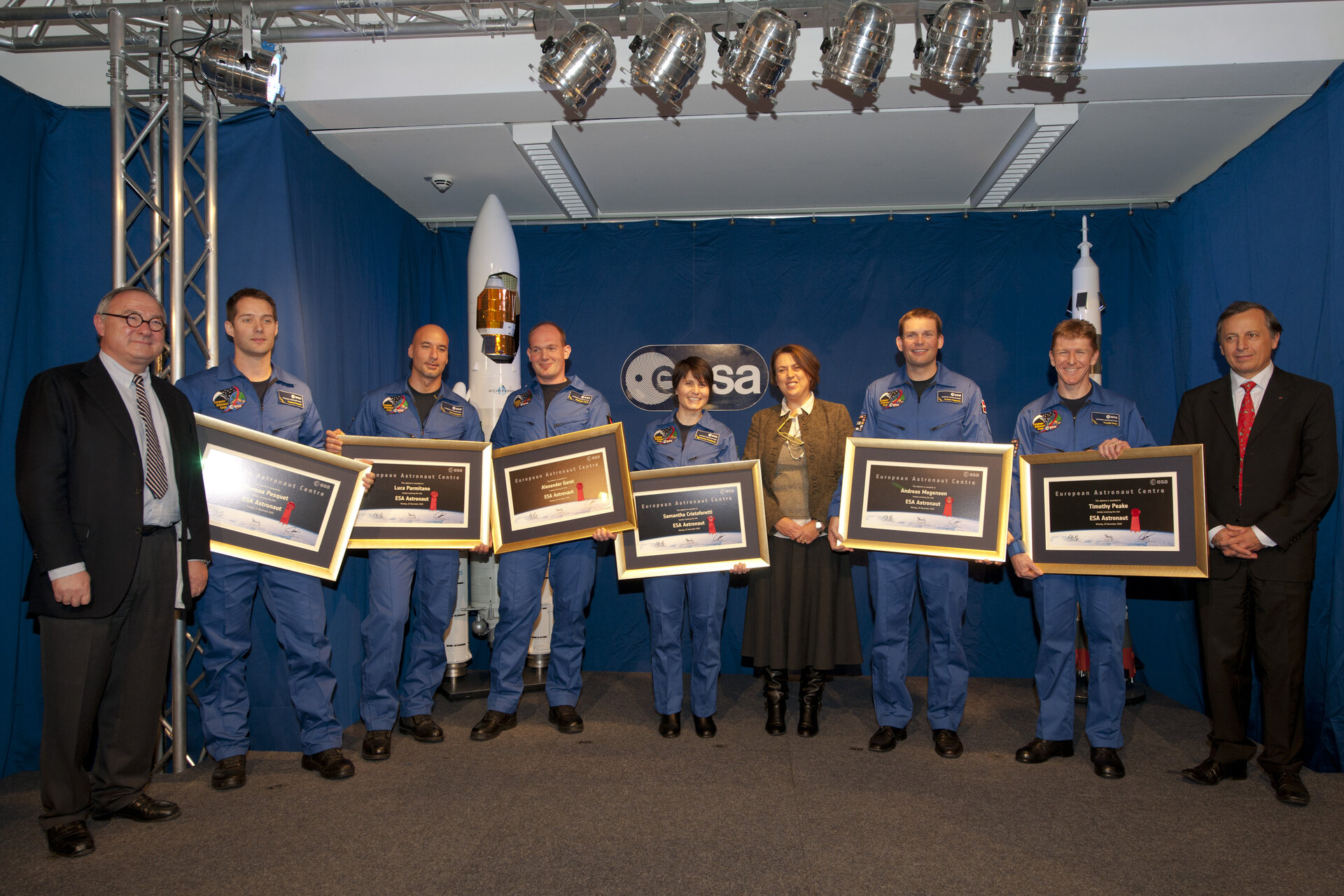 ESA’s six latest astronaut candidates proudly received their diplomas today at the European Astronaut Centre in Cologne, Germany. From now on, they are officially ‘astronauts’.

The new astronauts, smiling in their blue overalls, were in the spotlight at ESA’s training centre today. They were presented with their certificates signed by Jean-Jacques Dordain, Director General, Simonetta Di Pippo, Director of Human Spaceflight, and Michel Tognini, Head of the Astronaut Group.

The graduation ceremony, held in front of friends, family, guests and media, marked a milestone in their astronaut careers: the official end of Basic Training, the first phase of astronaut education.

It included scuba diving to prepare for spacewalks, robotics, survival training, rendezvous and docking, and the Russian language.

When the new astronaut candidates were selected in 2009, one of the main criteria was the ability to work in a team. The six formed a tight group from the beginning – a team spirit coloured their whole Basic Training period.

“When we introduced these six new astronauts, the most important part was not that there were six individuals representing five member countries, but a team of six persons representing Europe,” said Mr. Dordain at the ceremony.

“When I signed your awards a moment ago, I thought that you should have also received a team award, because I know that your team is more solid now than it was a year ago.

“We can’t assign you all to one single mission, but you will all fly to space and, when you do, I hope you consider a mission of one of you as mission of your team, too.”

“ESA has three new astronaut flight opportunities to the ISS before 2015, so half of the new astronauts will have an opportunity to fly in space very soon,” said Mrs. Di Pippo. “The first will head into orbit in 2013.”

“I hope that with these ESA astronaut flight opportunities and with these new astronauts we can give a further push to scientific utilisation of the Space Station.

“I think this is important, especially now when we see the utilisation of the Station continuing to 2020 and hopefully also beyond.”

Selection of the new astronauts began in 2008 when ESA called for candidates from all Member States and received more than 8000 applications.

After a year-long selection process, Samantha Cristoforetti from Italy, Alexander Gerst from Germany, Andreas Mogensen from Denmark, Luca Parmitano from Italy, Timothy Peake from the UK and Thomas Pesquet from France were invited to join ESA’s astronaut group in May 2009.

The new astronauts will continue with pre-assignment training and taking part in public relations activities. Once assigned to a mission, they will concentrate on specialised training for that mission.

Video coverage of the different phases of Basic Training of the new ESA astronauts is available at: http://multimedia.esa.int/Videos/2010/11/ESA-Astronaut-Class-2009

A new Video News Release will be released shortly at: http://television.esa.int/sche.cfm#