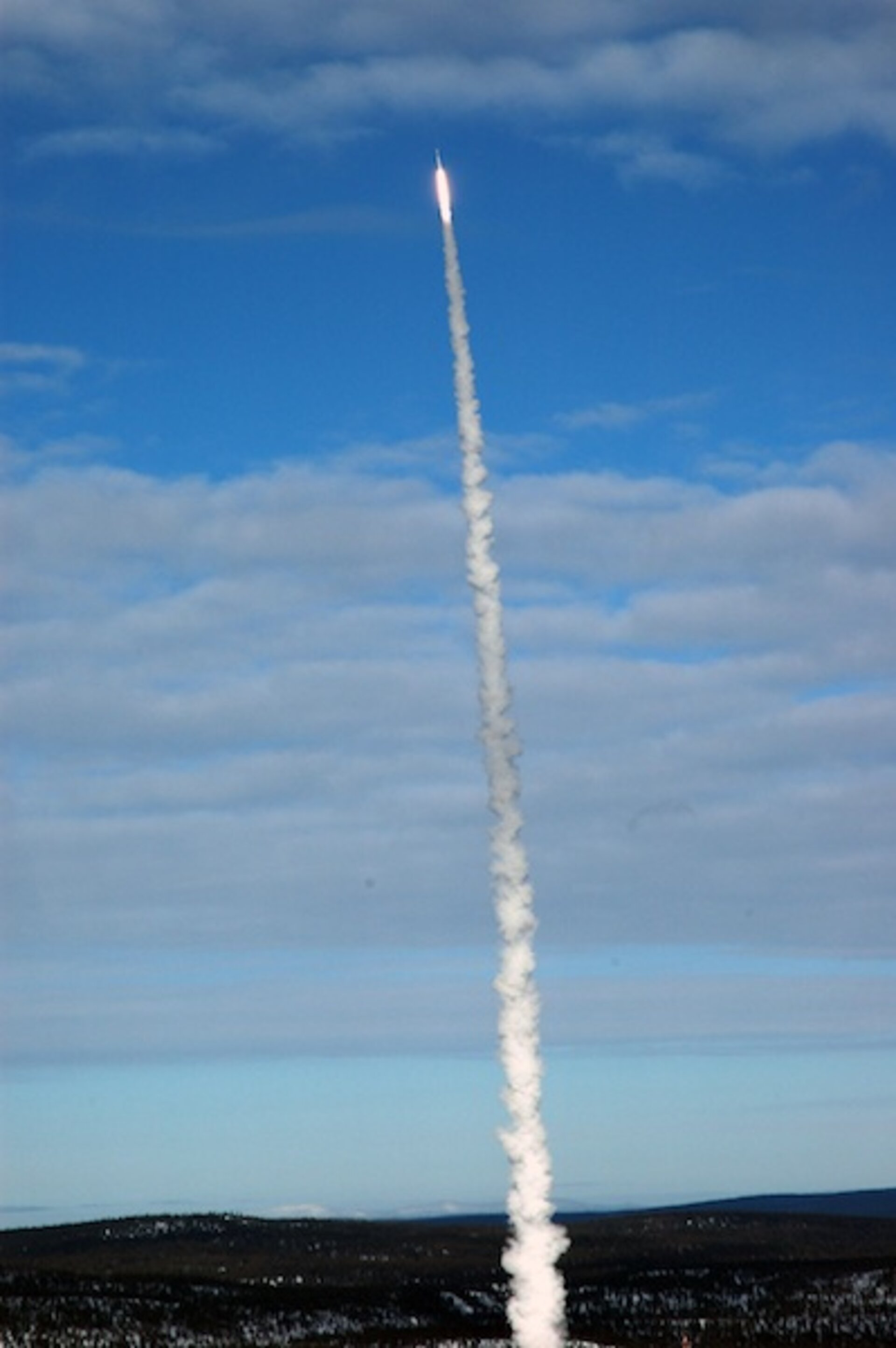 Witnessing the launch, they paid tribute to the importance of microgravity research in Europe and to the international European cooperation that makes this research possible.

“I am very happy to be back at Esrange to take part of a sounding rocket campaign again,” said Mr Dordain. “The campaign team has done a tremendous job and the researchers are pleased with the results so far. I must say I’m impressed by this extraordinary launch site and proud of having such a facility in Europe. It is a unique complement to International Space Station utilisation for the scientific community”.

“With the Maxus-8 mission, ESA continues its leading role in maintaining autonomous European microgravity platforms able to offer the user community with frequent flight opportunities to nurture the community which will also be using the ISS until 2020 and beyond,” said Mrs Di Pippo.

“Sounding rockets from Esrange are a key platform for research providing a cost-effective and independent means for Europe, with a relatively quick turnaround of results. They allow critical experiments with stringent handling needs, particularly in biology,” said Martin Zell, Head of ISS Utilisation at ESA.

“They also provide precursor testing of new science protocols and research equipment which later could be used for long-term experiments on the ISS.”

Small sounding rockets are used for microgravity research around the world, but Maxus weighs more than 12 tonnes and measures up to 17 m long. The solid-propellant motor can lift a load of 800 kg to space. The maximum altitude of the rocket is about 750 km, about twice the height of the Station.

This eighth Maxus campaign was designed to supply a wealth of data covering material science and biology. The experiments will help, for example, with the production of new lightweight aero-engine turbines and new catalysts for chemical reactors and hydrogen fuel cells.

“Having gone through a series of standard preparations and fine-tuning of the experiments the launch campaign was very smooth and we faced no significant problems,” said ESA manager Antonio Verga from Kiruna.

“According to data received, we achieved the desired altitude and an excellent microgravity level. That is good news for the scientific teams. The 6.5 m-long experiment section landed with a parachute about 80 km from here and helicopters have been sent out to retrieve it.”

The Maxus programme is funded by ESA through the European Programme for Life and Physical Science in Space (ELIPS), with the sounding rocket and launch services provided to ESA by an industrial joint venture between EADS Astrium and the Swedish Space Corporation.

Everyday benefits from the experiments

The biology experiment mapped the cyto-skeletal forces that underlie the gravity-sensing mechanisms in the roots of plants and fungi.

The first two experiments stem from a 5-year multi-million-euro integrated project from the European Commission (EC), which ESA has been leading with 40 project partners and which is co-funded by the EC within its Sixth Framework Programme.

This IMPRESS (Inter-Metallic Process in Relation to Earth and Space Solidification) project aims to understand the links between the solidification process of ‘intermetallic’ alloys, the structure of the material at the micro- and nano-scales, and the final mechanical, chemical and physical properties of the resulting alloys.

The end products from these studies may range from lightweight turbine blades for aero-engines and power generation turbines made from novel titanium-aluminium alloys with half the density of conventional nickel alloys, to improved catalytic devices, such as sponge nickel catalysts for chemical reactors and electrodes for hydrogen fuel cells.

Maxus-8 also carried a technology demonstrator: the SHARK Sounding Hypersonic Atmospheric Reentry Kapsule was released during ascent, at an altitude of about 150 km. It is fully autonomous and aimed to prove the feasibility of dropping a ‘blackbox’ from outside the atmosphere.