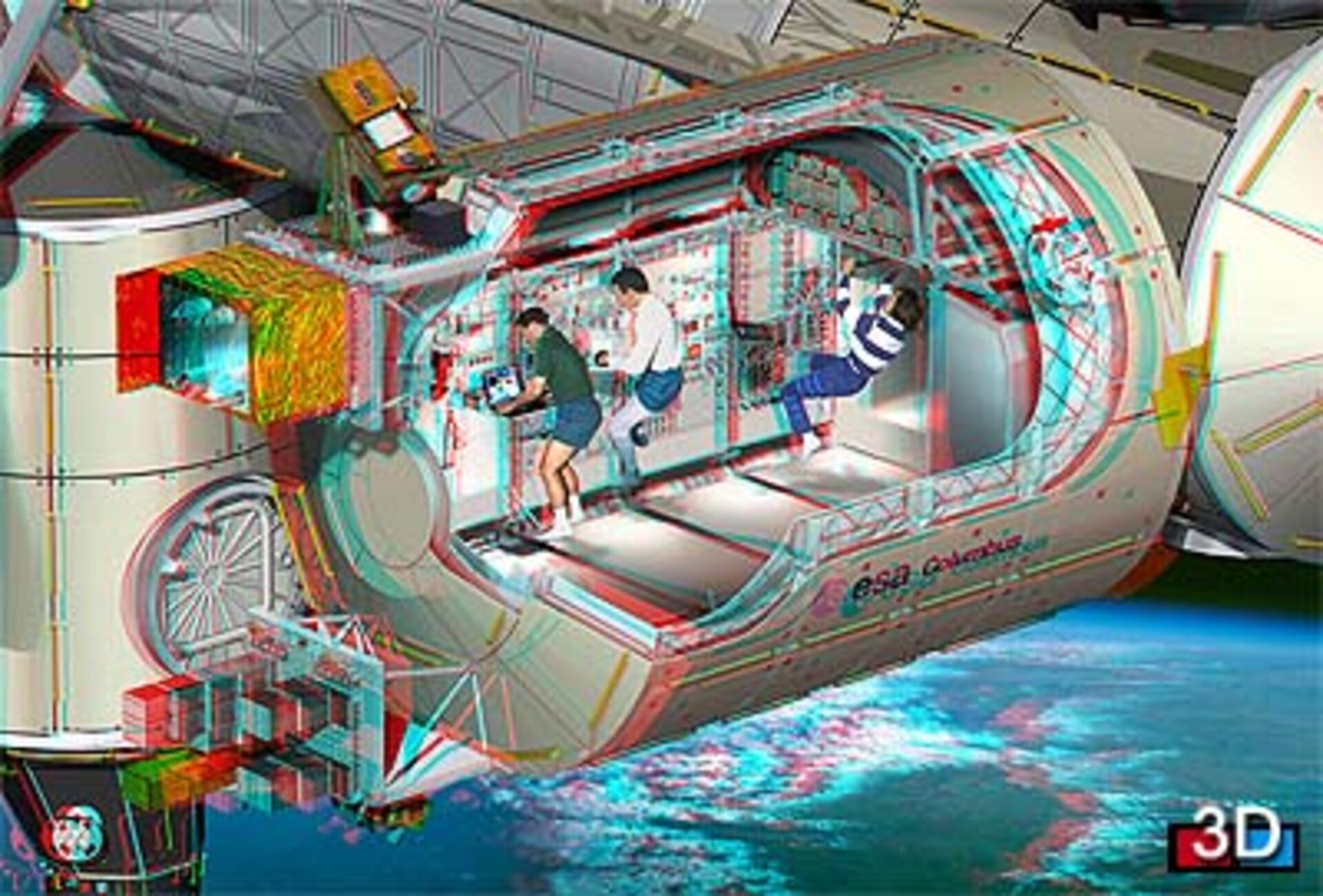 ESA PR 45-2001. With a live transmission from its International Space Station User Information Centre in Noordwijk (the Netherlands), ESA and German company TMP will demonstrate a new technique for shooting, recording and transmitting 3-D TV images.

Former ESA astronaut Ulf Merbold will present the European elements of the ISS to visitors to the International Radio and Television Exhibition "IFA 2001" in Berlin, explaining the possibilities for scientific and industrial utilisation for Europe. The stereoscopic TV images will be transmitted live from Noordwijk to Berlin via a Eutelsat satellite and projected onto a large screen. Wearing polarised filter glasses, spectators will be able to follow Merbold's explanations in 3-D and put questions.

This is the first ever public transmission using this system and will also demonstrate an ESA operational capability for video production/transmission of spaceflight-related content in 3-D.

The system developed by TMP of Bayreuth (Germany) is based on time-sequential coding of both video signals for the left and right eye in the standard PAL format. This makes it possible to record 3-D TV images on normal video tape (Betacam or other professional formats) by using existing studio production and transmission standards and hardware.

The multiplexed 3-D video signal can be transmitted via conventional TV satellites and is also compressible in MPEG enabling use of a low-cost digital transponder. In addition to the use of a special 3-D camera, production and transmission of the signal requires only, on the transmitting side, a special multiplexer unit. At the receiving end, a special demultiplexer is needed, while for the viewing of the 3-D images, any of the existing techniques for generating/viewing stereoscopic images can be used:

The TMP system allows for direct 3-D processing of both real video images taken by a 3-D camera and virtual reality images generated by computer graphics.

TMP, a typical small/medium size outfit, developed and brought to operational maturity this system in close collaboration with the European Space Agency. In two test transmissions done using ESA's television services in June and July, 3-D video content produced at the ISS User Information Centre was broadcast Europe-wide via a Eutelsat satellite and flawlessly received and screened at ESA and at the German aerospace centre (DLR), Oberpfaffenhofen.

The Information Centre envisages making considerable use of the 3-D technology in future to inform and advise potential users. It is also planned to record presentations and lectures for the "ISS virtual campus", which ESA is currently setting up to support onboard research for transmission via TV satellite and internet streaming video.

ESA is also preparing a number of different 3-D video products to be made available to information centres at other space agencies and companies, educational centres and theme parks, technical museums and exhibitions. It is also investigating the feasibility of flying a 3-D camera on the ISS to present life and work on board. This would open up scope for powerfully illustrating the laws of physics and technical processes for education and training purposes.

The ability to record hardware and operations on board in 3-D and transmit stereoscopic images live to earth will be instrumental to the development of two facilities. Telescience, which enables researchers to monitor experiments conducted onboard in real-time and directly intervene if need be. Telepresence, which involves the remote control of construction, maintenance and repair tasks using powerful robotics systems, which could support and take over future astronaut activities in space.

Both call for the capability of 3-D (tele-)vision. ESTEC and the DLR, industry and institutes in Europe under ESA or DLR contract, are working on developing appropriate equipment and procedures which could be put to use on the Space Station.