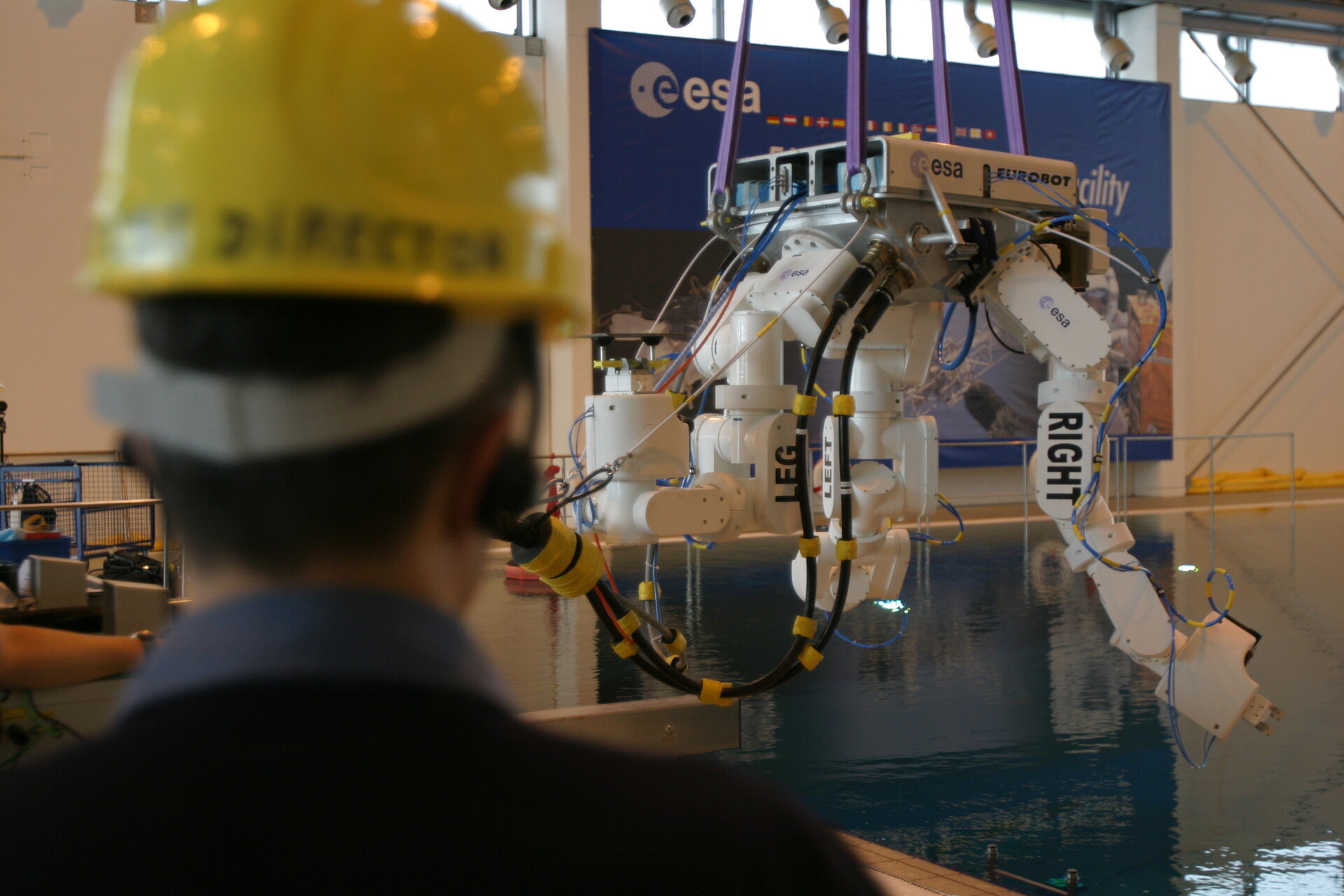 Many of the best-loved science fiction movies show intelligent robotic servants working alongside their masters. Fiction is rapidly becoming fact as European engineers develop increasingly sophisticated machines that can operate in space. One of these, known as Eurobot, has just completed trials in the giant pool at the European Astronaut Centre.

Eurobot has been under development since 2003, with the intention that the multi-jointed, three-armed assistant will eventually handle some of the more mundane tasks currently undertaken by astronauts. One possible use will be in helping astronauts during extravehicular activity (EVA), more commonly known as spacewalks, but the robot may also be an indispensable helper during human expeditions to the Moon or Mars.

In the hostile conditions of space, the tireless Eurobot will save a great deal of time and effort by taking over various routine tasks. For example, the astronauts’ flexible friend will be able to find its way to a work site on the International Space Station (ISS), perform a close-up inspection and carry out any initial preparatory work, such as the transfer of tools and equipment. Remotely controlled by an operator inside the ISS, Eurobot will be able to multi-task, providing additional hands and eyes for the spacewalkers. Once the astronauts are safely inside the Station, Eurobot will clear away the tools and equipment.

“It could be a most useful aid,” said Gianfranco Visentin, head of ESA’s Automation and Robotics section. “There is a shortage of crew time during all missions, so anything that improves the use of astronaut time is very desirable.” Former ESA astronaut Claude Nicollier, an expert in both EVAs and robotics, shares this point of view, "The support to EVAs is seen mainly in tasks such as worksite preparation, post-EVA cleanup and inspection."

The version of Eurobot used in this week’s exercises is an early prototype called the Weightless Environmental Test (WET) Model, which has been developed for operation in a 'Neutral Buoyancy Facility' – a water tank where the microgravity conditions found in space can be simulated.

Developed for ESA by a consortium led by Thales Alenia Space, the WET Model is similar in size and configuration of the planned Flight Model. It consists of a central ‘body’ structure with three identical arms, each with 7 joints. Although the arms’ length and strength are similar to those of a human, they are much more manoeuvrable and versatile.

In addition, each arm is equipped with a camera and an end-effector which acts as a hand. The WET model has only one type of hand, which is capable of grasping EVA handrails. In contrast, the real Eurobot will have a set of 3 or 4 interchangeable hands. A head camera on a pan and tilt mechanism provides a global monitoring view of the worksite.

In the latest trials, the WET Model was used to verify the operational concept for Eurobot. During tests of its ability to move and manipulate objects, the project team gained hands-on experience of the robot’s capabilities, trying out multi-arm control and coordination, along with visual recognition of obscured targets. Eurobot was joined in the EAC pool by ESA astronaut Jean-François Clervoy to demonstrate the interaction between astronaut and robot.

The trials at the European Astronaut Centre (EAC), in Cologne, Germany, conclude the initial verification phase of the Eurobot Wet Model programme, following on from previous preliminary dry and wet tests in Italy.

"The tests went very well", said Philippe Schoonejans, ESA's Eurobot Project Manager. "Not only has it been demonstrated that Eurobot can walk around an orbital station autonomously and safely, using no more than the existing EVA handrails, it is also becoming clear that Eurobot can really help the astronauts. And in the next phase we also plan to demonstrate its use on a planetary surface, as part of the Agency's exploration programme."

While the testing of the WET model makes it possible to study the operational aspects of Eurobot, ESA has undertaken a comprehensive programme to further its technological development.

This includes engineering models of the robot arms (called DexArm) and tool exchange device (CTED); the computer vision technology that allows Eurobot to identify and grasp objects (VIMANCO); the central brain that allows coordination of the robot arms’ motion (CONTEXT); a sophisticated human-machine interface that allows tele-operation of the DexArm (Exoskeleton); and a control station that is used to program and control the Eurobot (A-DREAMS). All of these are being integrated in the Eurobot test bed located at ESA’s Space Research and Technology Centre (ESTEC) in Noordwijk, the Netherlands.