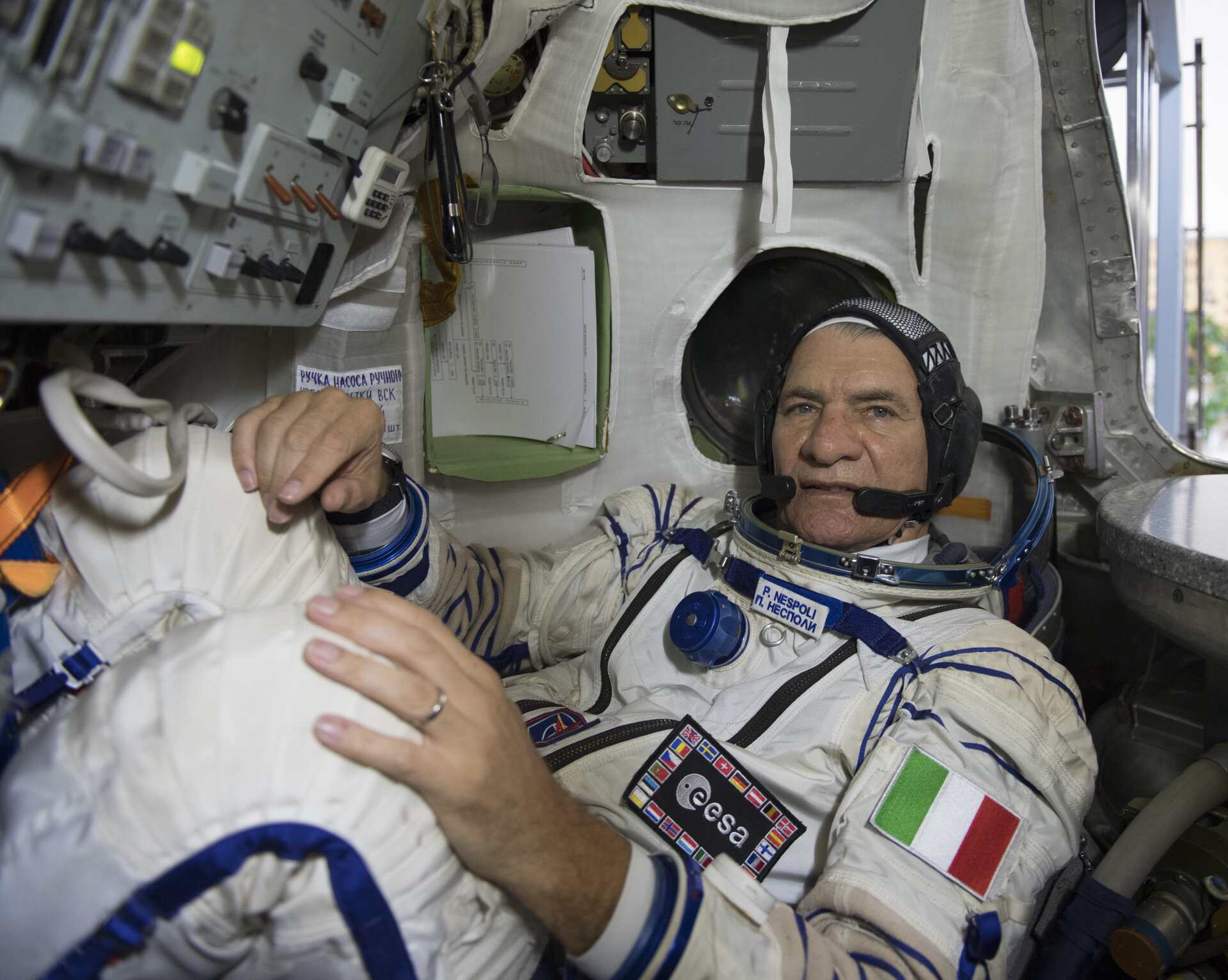 All good things come in threes

ESA astronaut  Paolo was born in Milan in northern Italy the same year that Sputnik marked the start of the space race.

On completing his education in aeronautics and astronautics, Paolo joined ESA’s European Astronaut Centre in Cologne, Germany, and contributed to creating the demanding training programmes.

As a man of action with an engineer’s mind, Paolo applied three times to join the astronaut corps. His stubbornness and preparation finally paid off: he became an ESA astronaut in 1998.

Paolo spent 174 days on the International Space Station on the Esperia and Magisstra missions, in 2007 and 2010.

“I really look forward to being an extraterrestrial person again. This is the best way to end my career as an astronaut.”

His next mission, set for launch 28 July , Paolo will join – among others – his crewmate from the Esperia mission, NASA astronaut Peggy Whitson.

As part of the Expedition 52/53 crew, Paolo will work, live, eat and have fun with many experienced astronauts: Fyodor Yurchikhin, Jack Fischer, Randy Bresnik, Sergei Ryanzansky and Peggy Whitson.

At 188 cm, Paolo is the tallest European astronaut and one of the tallest ever (the record belongs to NASA astronaut Jim Wetherbee, at 193 cm). Paolo’s first mission saw him take part in building the International Space Station by installing the Italian-built Harmony module (also known as Node-2). This utility hub added much-needed living and working space to the orbital outpost, a fitting task for one of the tallest astronauts.

Paolo will use every inch of space inside the Soyuz MS-05 spacecraft that will take him to Earth orbit and on to the Station.

The Soyuz MS is the latest upgrade to the venerable vehicle. It is currently the only way astronauts can travel to the outpost – the craft has been used for crewed missions longer than any other. When it was first launched in 1967, Paolo was only 10 years old.

Paolo will travel in the right-hand seat for his journey into space, the 134th flight for a Soyuz spacecraft.

After living and working on the Space Station for more than four months, Paolo will return to Earth in the same Soyuz, which will remain docked to the orbital complex throughout his mission to serve as a lifeboat.

When the time comes to leave, Paolo and crewmates will get a hard reminder of what gravity feels like, enduring five times their body weight during reentry.

Understanding Earth from above: science from space

Vita stands for Vitality, Innovation, Technology and Ability and was chosen by Italy’s ASI space agency, which is providing the mission through a barter agreement with NASA.

In Italian, “vita” means “life”, reflecting the experiments that Paolo will run and the philosophical notion of living in outer space – one of the most inhospitable places for humans.

The mission’s logo was developed by ESA together with ASI and Paolo. Three elements stand out: a strand of DNA as a symbol of life and science, a book as a symbol of culture and education, and Earth as a symbol of humanity.

All of the experiments make use of the out-of-this-world laboratory – (including the European Columbus Laboratory – to improve life on Earth or prepare for further human exploration of our Solar System.

When not performing science, Paolo will work with his colleagues to maintain the Space Station and keep the orbital outpost running smoothly for the crew of six.

Paolo’s unique home will allow him to inspire the next generation of engineers and scientists as he shares his journey with youngsters on Earth. He will encourage young generations to keep their brains active and follow a healthy lifestyle for two international challenges..

Paolo is supporting Mission-X: Train Like an Astronaut, an educational programme in which schoolchildren from more than 25 countries pursue science activities and learn how to get fit. He is also an ambassador for the European Astro Pi Challenge, a unique opportunity for European students to run their own code on Raspberry Pi mini computers installed in the Station.