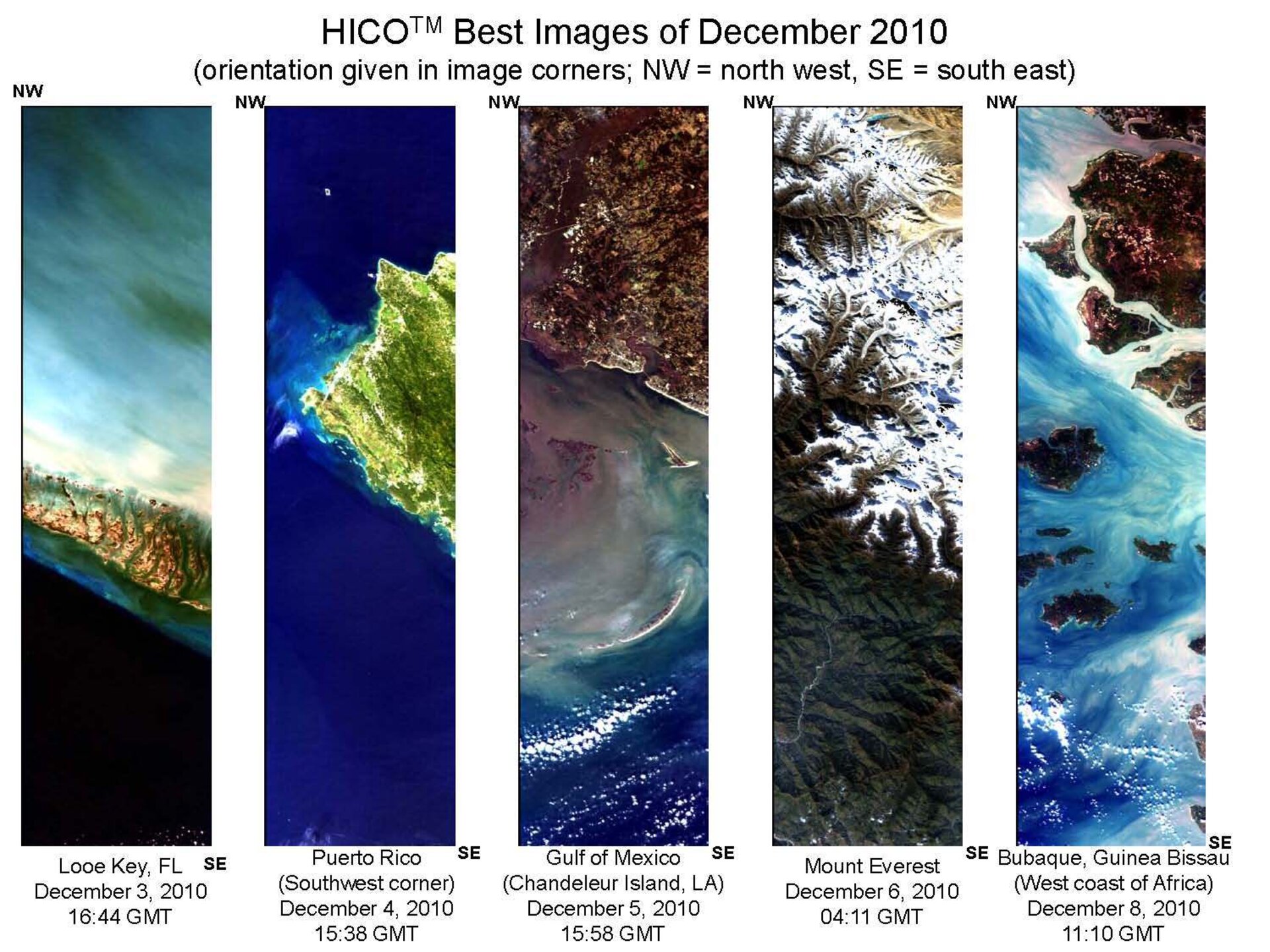 Scanning the globe from the vantage point of the International Space Station is about more than the fantastic view. While cruising in low Earth orbit, the space station HICO and RAIDS Experiment Payload–Hyperspectral Imager for the Coastal Ocean, or HREP-HICO, gives researchers a valuable new way to view the coastal zone.

Using an imaging spectrometer mounted outside the station on the Japanese Exposed Facility of the Kibo Laboratory, researchers are collecting data about the Earth that will help them to better understand coastal environments and other regions around the world.

Why is this important? Coastal waters are an important link between local and global economic development and environmental sustainability. Coastal zones support many of the world’s major cities (and their industrial zones, ports, recreational facilities); they also include critical ecosystems that support fisheries and protect shorelines.

HREP-HICO is a visible to near-infrared wavelength spectrometer optimized for environmental characterization of coastal zones and mapping of terrestrial geophysical features of the Earth. Mike Corson, Ph.D., principal investigator for HREP-HICO at the Naval Research Laboratory in Washington, D.C., explained that “Coastal environmental characterization includes producing maps of near-shore bathymetry, water clarity, organic and inorganic dissolved and suspended matter and bottom characteristics…. Such maps are important to Navy and Marine Corps who operate in coastal areas.”The Payload Operations and Integration Center at the Marshall Space Flight Center in Huntsville, Ala., manages operations for HREP-HICO. Aside from the initial installation and eventual removal from the station via extravehicular robotics, the collection of data from HREP-HICO requires no crew interaction.Taking images of the ocean, however, is harder than it seems. As the first space-borne imaging spectrometer designed to sample the coastal ocean, HREP-HICO has to account for the vast breadth of global coastlines, the complex makeup of the ocean, changing weather conditions, and the location of the sun. These challenges can easily obscure views of the water and the sea floor—yielding poor and incomprehensible imagery.HREP-HICO records reflected light from a range of wavelengths—including visible and near-infrared wavelengths. This spectral information is used to identify and quantify each pixel in the image scene. This allows for subsequent correction for atmospheric effects and sea surface reflections.HREP-HICO also demonstrates its utility to meet Department of Defense requirements by validating the performance of Maritime Hyperspectral Imaging, or MHSI, technology. MHSI technology provides imagery performance requirements and product retrieval algorithms tailored by scientists for the coastal zone. “Product algorithms for MHSI often make use of biological or physical information relevant to the imaged area because of the complicated nature of coastal environments,” Corson explained.The Office of Naval Research sponsors the HREP-HICO instrument as an Innovative Naval Prototype. The HICO prototype has two goals. The first is to demonstrate the ability to produce maps of coastal environmental properties using hyperspectral imagery from space. The second is to demonstrate ways to reduce the cost and schedule of building a space payload. By manipulating design and using commercial-off-the-shelf components where possible, engineers effectively designed HREP-HICO at a fraction of the cost of traditional space instruments.The results from the HREP-HICO investigation provide benefits to agencies with marine responsibilities, such as the National Oceanic and Atmospheric Administration, or NOAA, via information on bathymetry, bottom type, water clarity, and other water optical properties. This technology can also aid in land studies for agricultural purposes by monitoring land cover, vegetation type, vegetation stress and health, and crop yield. Researchers may also use HREP-HICO to determine the environmental impacts of natural and unnatural disasters, such as the 2010 oil spill in the Gulf of Mexico.The HREP-HICO launched Sept. 10, 2009, and was mounted to the International Space Station’s Japanese Experiment Module–Exposed Facility, or “front porch.” HREP-HICO is the first U.S. experiment payload mounted on the Exposed Facility.HREP-HICO collected its first imagery on Sept. 25, 2009. According to Corson, “HICO has recorded almost 4,000 hyperspectral images of coastal environments worldwide during its ongoing mission. HICO will continue its pathfinder missions, providing image data to dozens of government and university researchers.”