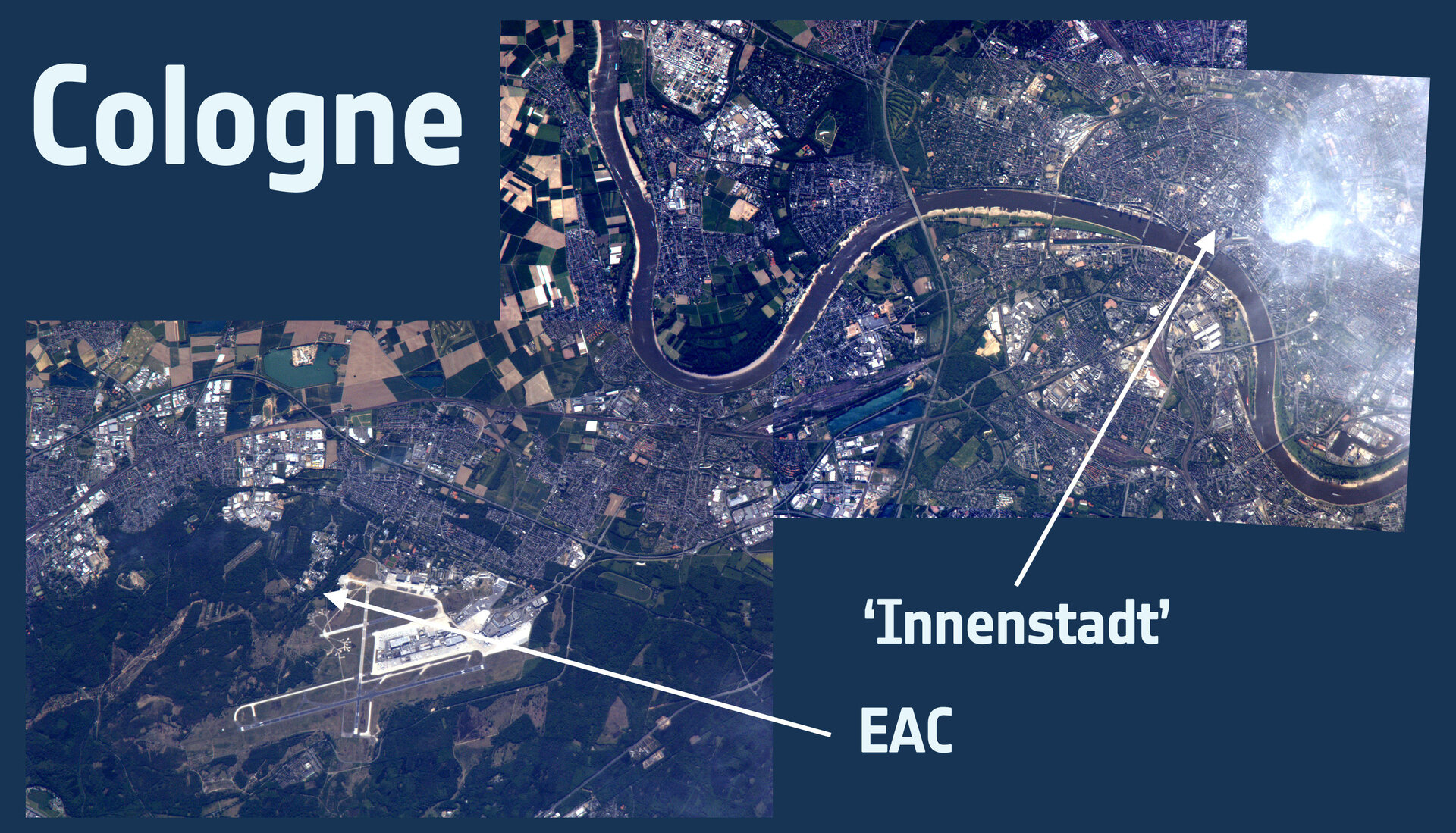 Cologne is not only the fourth largest city of Germany and home of the classic perfume, but also the home base of the European astronauts. The latest photos from Paolo Nespoli feature this city with a long tradition in spaceflight.

The Rhine river is a central feature in the photos, taken by Paolo from the Cupola of the International Space Station on 11 May. It runs from Porz in the south through the city centre, or ‘Innenstadt’ in German, to Chorweiler area up in the north.

This southern part of Cologne is where the airport is located; the large terrain on the southern side of the airport also houses the research campus of the German Aerospace Center (DLR).

The European Astronaut Centre (EAC) is on the DLR premises, sharing some functions with them. The campus area is very visible in one of the photos off the crossing point of the two shorter runways: long, straight road with dark buildings and one brighter building – EAC – all surrounded by forest.

Home base of the Europan astronauts

Established in 1990, EAC has more than 90 professionals supporting ESA’s Directorate of the Human Spaceflight and Operations.

It is Europe’s centre for astronaut selection, training, medical support and surveillance, as well as support of astronauts and their families during preparation for and during flight.

It takes care of planning and scheduling of their tasks and flight assignments, and the preparation and implementation of astronaut training programmes for missions to the International Space Station (ISS).

The expertise accumulated by EAC in spaceflight is used also in the fields of medicine, nutrition and fitness. In addition, EAC provides public relations assistance for human spaceflight and educational activities, as well as promoting opportunities to industry for commercial experiments.

The southern suburbs of Cologne. Inside the loop of the Rhine river is the district of Rodenkirchen with about 100 000 inhabitants. The city centre is on the right, on the upper side of the river.

The other side of the river, still on the southern part of the city, includes the airport and the DLR area with the European Astronaut Centre (EAC). EAC is almost in the centre point of the photo, a bluish-metallic building at the lower end of the road in the built area (DLR campus) on the left from the vertical runway.

The ‘Kalk’ district and ‘Innenstadt’ on the upper part of the river. Kalk has a big convention centre with white roofs visible and it is connected to city centre by several bridges, like the Deutz, an icon of Cologne, leading to main railway station in the vicinity of the cathedral – another icon of the city. Both are just left below from the white light reflection from the Cupola window. In total, Cologne area has about one million inhabitants.