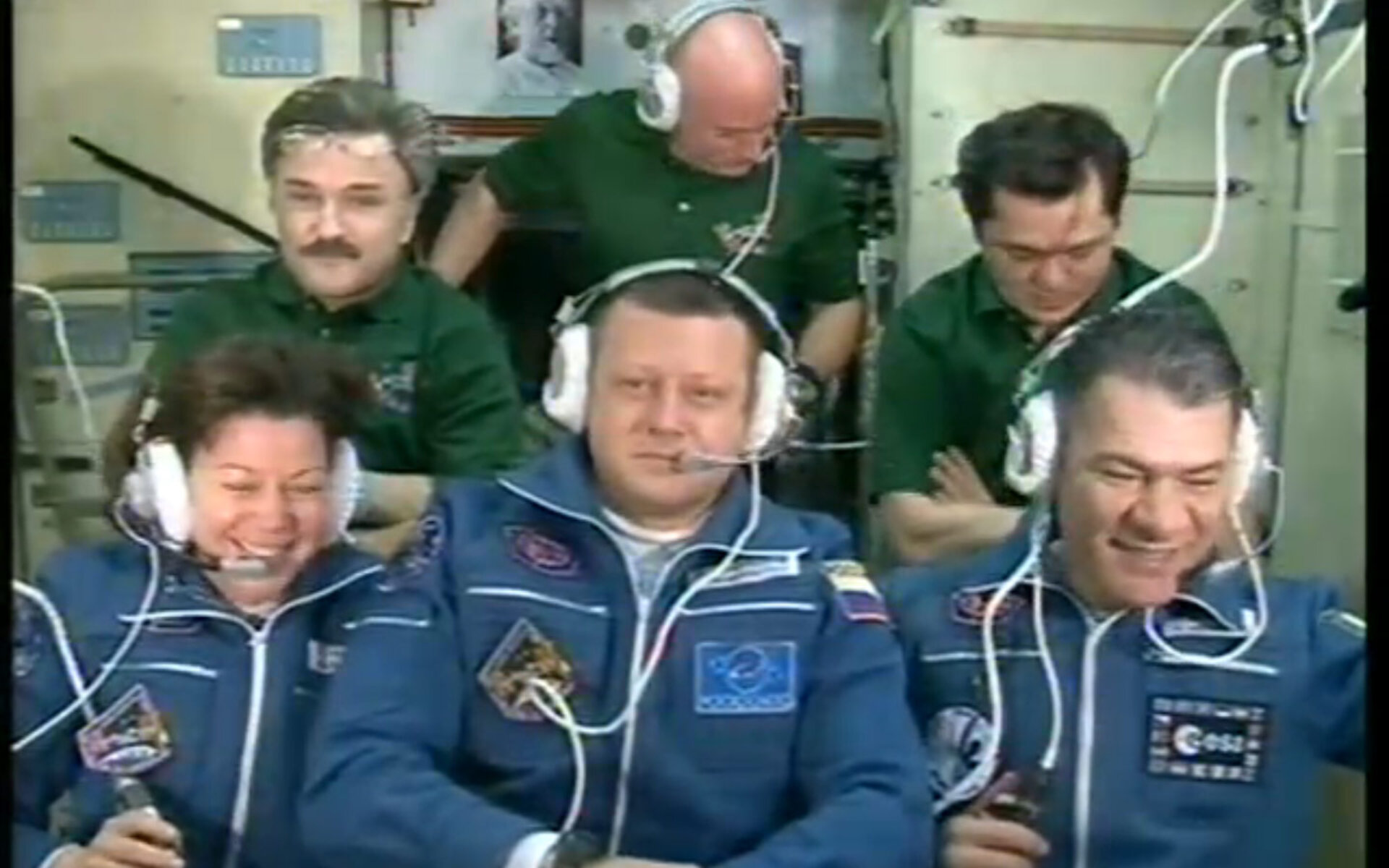 The Soyuz TMA-20 spacecraft docked this evening with the International Space Station carrying ESA astronaut Paolo Nespoli and his crewmates Dmitri Kondratyev and Catherine Coleman. They will stay in orbit now for six months and return to Earth next May.

During this third flight day, the crew prepared their vessel for arrival, closed the hatch between its two modules, donned their Sokol pressure suits and carefully monitored the approach and docking sequence.

The automated rendezvous sequence began about two hours before docking, but the crew, especially Soyuz Commander Dmitri Kondratyev, were standing by to take over manually if required.

After two firings of the Soyuz engines, the Kurs rendezvous units on both the Soyuz and Space Station was activated. Soyuz approached the Station slowly, started a majestic fly-around arcing downwards from its position trailing the Station and ended aligned almost perfectly with the Earth-facing docking port of the Russian Zarya module.

With TV cameras transmitting views of the Station, Kurs providing exact position readouts, Mission Control in Korolev, near Moscow, in charge and the crew standing by, the approach was halted about 150 m from the Station for a final readiness check.

After approval by Mission Control and the crew, Soyuz began the last part of the orbital ballet with short firings of the smaller control rockets and slowly approached the Station.

After the linkup, the firm connection of the craft was verified and, when pressure checks confirmed no air leaks, the crew remove their suits. The pressure was equalised between the two vehicles and the hatch to the Station was opened at 00:05 CET.

“It is always a strong feeling to see them entering the ISS and greet the rest of the crew,” commented Simonetta Di Pippo, ESA Director of Human Spaceflight from the Russian control centre.

“I am proud of the level of integration and importance Europe has reached in the ISS partnership also thanks to a regular presence of European astronauts on the ISS.

“I wish Paolo and the whole crew a pleasant stay and a fruitful mission.”

During his MagISStra mission, Paolo Nespoli is serving as flight engineer of Expeditions 26 and 27 with Kondratyev and Coleman.

MagISStra includes more than 30 experiments not only for European scientists, but also for the US, Japanese and Canadian space agencies.

His educational programme includes the international ‘Mission X: Train Like an Astronaut’ initiative built around health, well-being and nutrition, and ‘Greenhouse in Space’, a greenhouse to grow plants and observe the life cycle of a flowering plant, with schoolchildren using a similar unit and the same species of plant on the ground.

Paolo will also use ESA’s special 3D camera to show the Space Station and life aboard in a new way. He is also using several social media to communicate with the general public and media – and everyone is invited to participate.