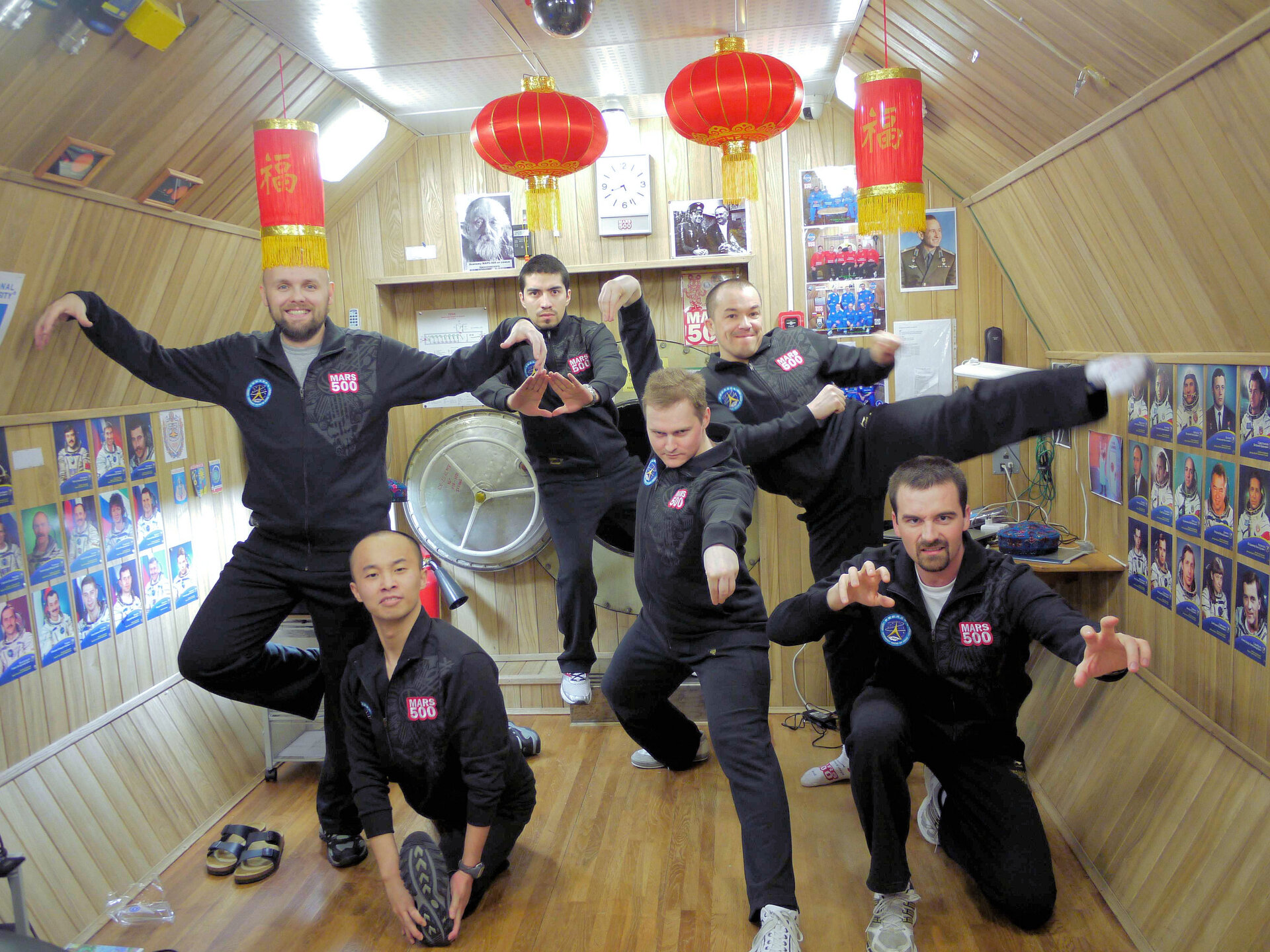 Romain wrote in his latest diary Chinese New Year, that happened just after they have ‘entered’ orbit around the red planet. The text has been now updated with new photos from the 'Spring Festival´ party. But this was just one of the many traditions from different countries the crew celebrated in January.

The opening of the Martian landing module is not the only big event that will happen in the next few days in our Mars 500 facility. A huge party celebrated by more than 1 billion people will also reach us who are so far from Earth. The Chinese New Year, also called ‘Spring Festival’, is brought to us on the evening of 3 February – thanks to Wang Yue. For months he has been training on his calligraphy and for this special occasion he has used his skills to craft lamps and posters decorated with Chinese characters. In particular, he prepared six special posters where six different wishes were written: one for each of us.

For a whole evening we all learned our sentences in Chinese. I let you imagine how the noise level rose gradually as we repeated our words aloud. Diego was the first to pick up a phrase and to start learning it. It was one of the most difficult with a lot of ‘sh’ sounds. I joined him when I repeated mine again and again to have a correct Chinese accent: “Fu Ju Dong Hai”. These sounds mean “May your happiness be as vast as the Eastern Ocean (=Pacific Ocean)”. I was amazed to see that only four Chinese characters could lead to such a complex sentence in English. Our three Russian guys soon added their voices to the general humming filling the volume of our modules.

After one hour of intensive learning and laughing we made several videos which will be shown on 3 February in China. From what we understood, the Spring Festival is something huge in China but also all around the world, with a lot of dragons, lamps and firecrackers.

I was equally surprised to learn how important the New Year party was in Russia. At the end of December, I could see that my three Russian crewmates were more and more excited by the upcoming event. It took me several days to understand why I couldn’t match their ‘cheering level’. In our Western countries we tend to celebrate Christmas in our families and then the New Year’s Eve is spent with friends. Here in Russia you have to imagine celebrating both Christmas and New Year on the same day to have an idea of the importance of it.

Traditionally they would begin the party with their families until 01:00 or 02:00 at the morning. Then they meet with friends to continue the festivities until dawn!

In our spaceship on 31 December both Sukhrob and Alexey woke up more than one hour earlier than usual because of their excitement. Our whole day was filled with smiles, expectations for the evening and food preparation (the latter being very quick as we still had our strict menus to follow).

Around 19:00 the party started and we spent the next five hours between the kitchen (talking together) and the living room (watching typical Russian comedies). Just before midnight we gathered again in the kitchen, we started the countdown and we ended it with a loud: “C Novam Godam!”» – throwing a lot of paper ribbons and paper balls all over the place. A few minutes later we were immortalising this ‘extra-terrestrial’ party with a lot of cheerful pictures! We waited till 02:00 to celebrate again the New Year but this time for France and Italy. After that, one after the other, we headed back to our rooms.

A few days later it was my turn to introduce a French tradition to my crewmates. Two religious gatherings could have been observed on 6 January. The first was the Orthodox Christmas, based on the Julian calendar, which is delayed by 13 days compared to our Gregorian calendar, and the second was the Epiphany for our Western Countries. I focused on the second because we have a nice tradition for it in France called ‘la galette des rois’ – the Kings’ pancake.

The idea is to make (or buy) a cake filed with an almond stuffing: ‘la galette des rois’. A small porcelain figurine – called ‘la fève’ in French - is hidden inside. At the end of the meal on this day, the cake is shared between everybody around the table and the lucky one who gets the figurine in his slice becomes king (or queen) for the day. In honour of his newly earned status, he gets a crown that he has to wear for the rest of the day.

As we didn’t have this special cake inside the modules I took one with the closest taste to a real ‘galette des rois’. I hid ‘la fève’ (that was hidden in my belongings since my entry in our Mars500 modules) in it and I made a paper crown. On this evening I asked everybody to stay around the table to share this colourful tradition. It’s always possible to find some hints of the presence of the figurine in the cake and then a ceremonial is observed to assure a fair trade. The youngest – Diego – had to hide so that he couldn’t see the six portions of the cake. Then another person – our commander Alexey – pointed at one random part and a very complex question is formulated to Diego: “Who?”. He had to announce all our names randomly until everybody was served.

The best part of the evening comes just after, because then we could, at last, enjoy our cake. We stabbed quite wildly at all our portions to discover who was our ‘king of the day’. The winner was: DIEGO! If you get a chance, don’t hesitate to taste a real ‘galette des rois’

As an international crew it’s a pleasure to understand and celebrate each other’s traditions. And it also provides a good change from our days’ work.