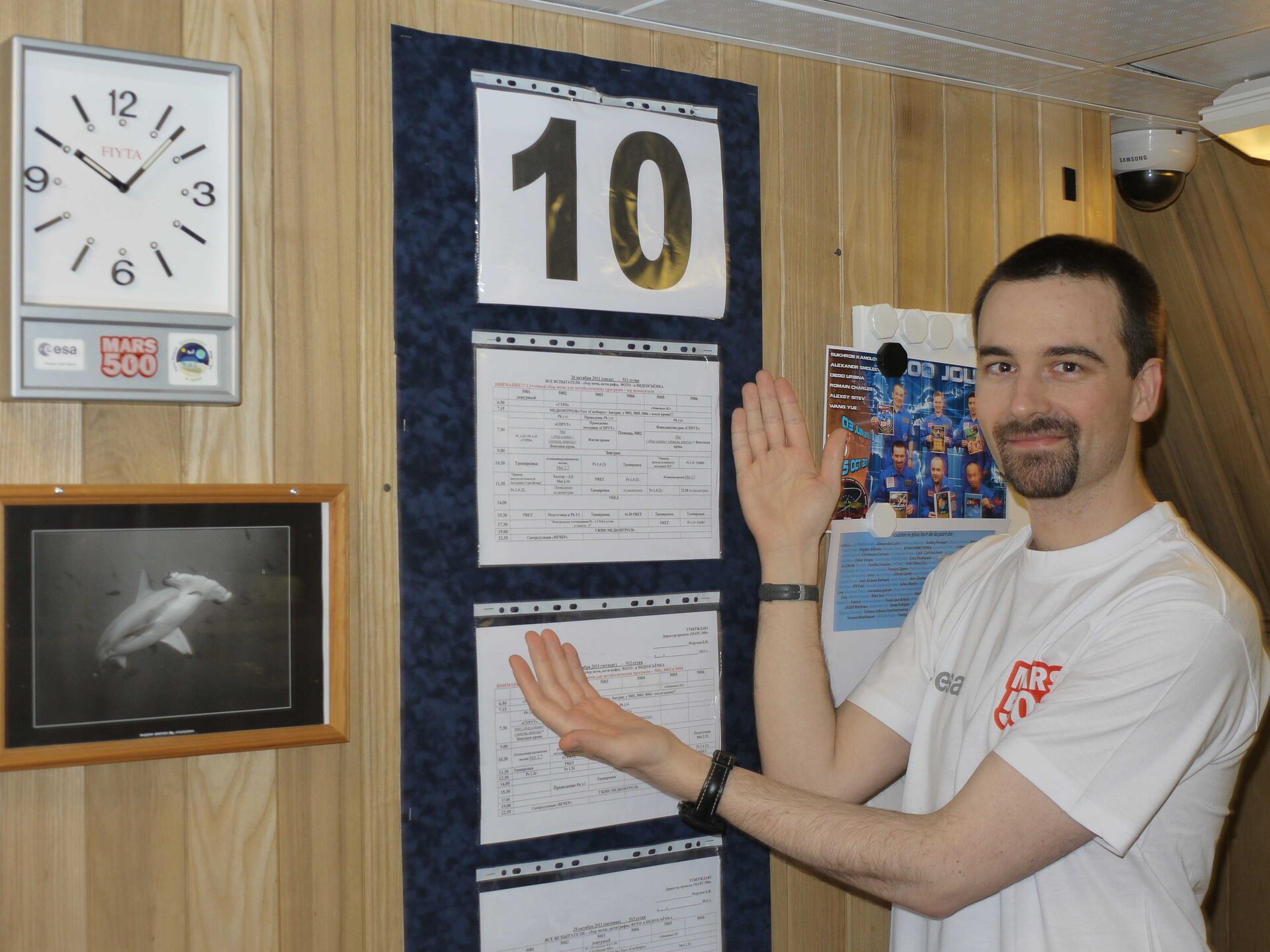 Romain writes in his diary about the long last months and the excitement of approaching Earth and liberty, as well as their preparations for hatch opening on 4 November. Most important of all: he explains when their personal countdown started.

A few months ago the six of us were sitting around the little table in our wooden kitchen finishing a nice lunch. While everybody was slowly sipping their hot tea, I brought a question to the attention of our gathering: "Shall we begin our final countdown 100 days before the end of the Mars500 mission or at another moment?".

The idea of a countdown is quite a strong symbol for us and everybody had a different view on it. Finally we reached a unanimous conclusion: "we'll start it for the last 10 days and not before." Today, on 25 October 2011, 10 days before our egress, we're ready to count!

However, I'll rewind a few months to give you an overview of the latest and toughest part of our motionless trip. It was difficult to realize it while we were enduring it but now that we're close to the end I can say without a doubt that, except for a few colourful days, our months of August and September were dull.

It's actually a sum of little things which led to this:

- We receive almost daily some messages from our family and friends and they help us to cope with this long-duration isolation. However, quite naturally, the holidays in August and the first days back at work in September kept them quite busy. I don't blame anybody because I would have been doing the same if I was outside. The fact is that, from our modules, we saw a diminution of these highly appreciated letters from the outside world.

- Another factor is the repetition of our scientific experiments. After more than one year rehearsing the same experiments with the same equipment and the same test subjects, it's sometimes hard to find as much interest as during the first session 500 days ago. We still perform each experiment as efficiently as before - and often more efficiently - but what we're looking forward to is discovering the conclusion of all the studies being followed by the world-wide community of scientists.

- The last obvious cause is linked to our food. Thanks to the degustation that we did during our training period, all the food stored in our spaceship is fine. However, our menu is based on a one week cycle with little variation. We could adjust some dishes at our convenience but our favourite choices were the quickest to disappear. For example, after only one month the delicious tuna in oil vanished and, after four months, our good favourite chocolate bars followed the same fate. This led to a monotonous diet for the last couple of months.

But enough with the gloom. The light came for us when we reached the Earth's vicinity which allowed the long-awaited ‘direct communications’. Our first guests arrived at the mission control centre in Moscow at the end of September. This event was the first step toward the bright and pleasant month of October.

You can easily picture this month as a stair leading to a delightful state of mind. Each day we took one step forward and our mood rose accordingly. As mentioned above, the first step was the phone conversation with our family members and especially the possibility to speak in our native languages.

On my side, after 500 days, I didn't forget my French but I must admit that some words were harder to find than their English counterpart… my sister enjoyed teasing me for that!

Another point which brings me some pleasure is the action of storing the scientific experiment's devices for ‘the last time’. We'll have the opportunity to go through all the experiments once again for the ‘Post-flight Data Collection’ in November but at that moment we'll be living in the open on Earth!

Of course, we didn't forget the important event which happened on 13 October: Alexander was the last to celebrate his birthday during the Mars500 mission. As usual, we followed our tradition and he received his presents during the breakfast that we share in the morning.

One further hint of the end of our trip is the amount of messages that we receive from our families talking about tickets booked for Moscow and asking for information regarding the detailed planning of our 520th day.

Some of us are also going through a spring cleaning of their rooms to make sure that nothing is forgotten behind. It's amazing to realize the amount of bits and pieces which can end up below our beds… even when you're in a closed environment!

At last the countdown embodies the feeling that was constantly growing throughout October: the end is close! Our international crew went through the Mars500 mission successfully and we're happy and proud to answer positively to the question asked one year and a half ago: "Is Man able to endure, physiologically and psychologically, the confinement of a trip to Mars?”