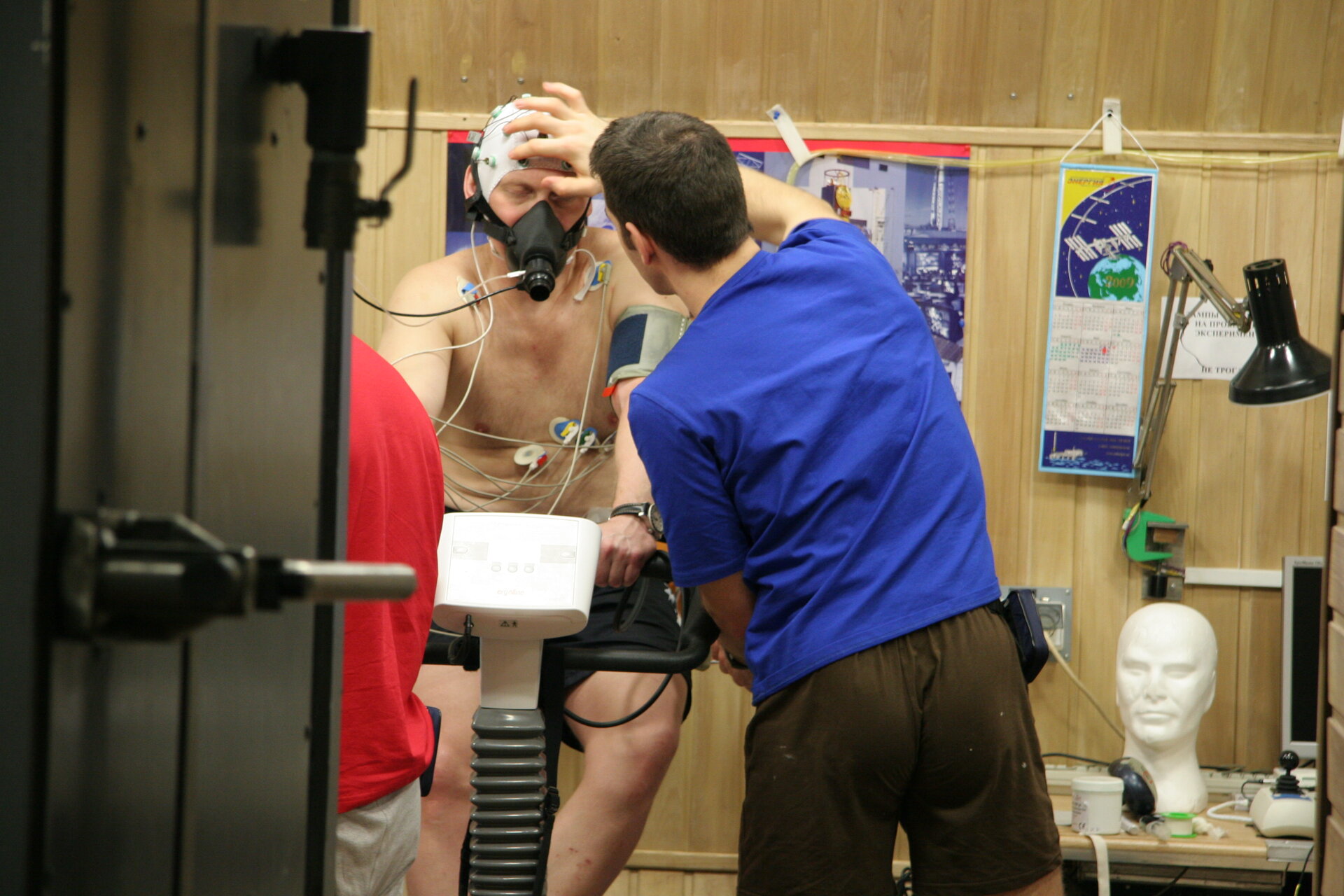 The Mars500 crew has completed a second period of 35 weeks inside the isolation facility at the Institute of Biomedical Problems in Moscow, Russia. Now two-thirds of the way through their Mars mission simulation, ESA-selected crewmember Cyrille Fournier reports back on the past week.

To continue with Oliver’s metaphor from last week, I have to say we may not have scored the third goal yet, but we had numerous chances! This comparison with a football match comes right as on Earth, somewhere in Moscow, a big diplomat’s football championship is going on, as far as we could understand by reading through the written news we regularly receive from ESA. Well, we are obviously and definitely supporting the European teams, at least, and are waiting for the final results!

Meanwhile, the week ending today (Sunday 7 June) has been rather quiet and to tell you the truth, a repetition of our fifth week. Just like Oliver wrote at that time, we are currently finishing our second 35-day period. This means complete physiological and psychological checks for the second time during our isolation. The medical teams outside will then analyse our data and draw conclusions concerning our behaviour and evolution throughout this second five-week period.

Without going to far into the details, we filled out psychological questionnaires, we gave fluid samples (saliva, urine, breathing air and blood), we carried out EEG and ECG recordings and we performed physical tests in order to measure how efficient our physical exercises in counteracting the lack of activity experienced because we are living in a limited space.

During this week, we have still kept up with other regular and classic tests, such as 'Pilot light' or 'MECA'. Pilot light is a simulation conducted by a Russian team of psycho-motricity psychologists, during which we pretend we are in a Soyuz spacecraft that we have to dock with the ISS. For the time being, we are going through a lighter version of the final simulation, just to get used to the six degrees of freedom you need to master when evolving in space as you can translate or rotate you ship along three axes. We are doing pretty well so far and I have to say it is quite interesting, especially for me as a pilot!

Another interesting test is the ESA-supported MECA (an acronym for Mission Execution Crew Assistant), for which we are performing three different tasks through our individual network-connected laptops: it consists of a multi-user game, a collaborative training and an individual game.

Once again without getting into the details of each part, the overall objective is to develop an 'electronic partner' that helps crewmembers to assess a situation, perform operations, determine an acceptable path to solve problems and safeguard the astronauts from failures. However, to fully suit the crew needs, this ePartner needs a huge amount of empirical data. This is why we are performing this test regularly, to bring some more data to the developers so that they finally come up with a programme completely adapted to future mission tasks and characteristics.

We also had take part in another important training this week to maintain our high-level skills for our module's systems. With the module being completely autonomous, we need to know how to react in case a system fails, either due to a simulation proposed by Mission Control or, even more important, because of a real failure.

For this the six of us trained on a computer programme dedicated to simulate failures. Simulated failures were displayed on the system and we had to react and perform adequate actions in order to fix or counteract the consequences. This was also a very good reminder of how the systems' architectures are designed, which is essential when dealing with such a complex environment as spacecrafts.

Along with all these tests, we continued our everyday life. For instance, Oleg almost harassed me in order to get songs from Edith Piaf! I managed to survive by giving him 'La vie en rose' and 'Non, je ne regretted rien'. He was so enthusiastic about them that he listened to them for hours and woke us up the next morning with these songs!

Next week, the 17th symposium on 'Humans in space' will be held here in Moscow. We have been asked to record a speech that will be broadcast to the audience. We started writing the text and used our video camera to record our message before sending it to the ESA-IMBP staff outside.

Last but not least, as communication was a bit easier during this week because of the all the tests we had to perform, a class of students from the French lycée in Moscow took a day off – although they are preparing their baccalauréat – and came to the module's Mission Control room where we talked for about 30 minutes over the phone.

They asked lots of interesting questions (are you doing sport?, what are you eating?, what will you do as soon as you exit?, etc.) but also informed me that Bordeaux finished first in the French football league, that at that time Maria Sharapova was still in the race for the Roland Garros crown (mostly the boys told me that!) but that Rafael Nadal had lost (mostly the girls mentioned that!). So thanks to all of them for this very nice visit and I wish you good luck for the baccalauréat exam starting Monday 8 June!

Finally, I cannot finish my report without mentioning that an Air France Airbus A330 has been reported missing on 1 June. As an Air France captain, I truly feel deep sorrow for all the people on board, passengers as well as my colleagues and friends who were crewmembers.

It is a painful reminder that, although we have been used to consider risks and hazards as completely under control, air and space are still areas in which risk will never be brought to zero, would that be at an altitude of 10 km, 400 km or 60 million km. But we can and must reduce the risk, to the tiniest possible. This is why onboard systems are evolving, this is why crews are thoroughly trained, this is why procedures are set up and this is why gained experience is useful.

Life has to go on, even and especially after such a tragic event. Because travelling, discovering the world and beyond gives us great pleasure and fuels our thoughts, we will never stop going forward. Life means risk. And reducing the risk, for space travellers, is precisely the goal of our Mars500 project.