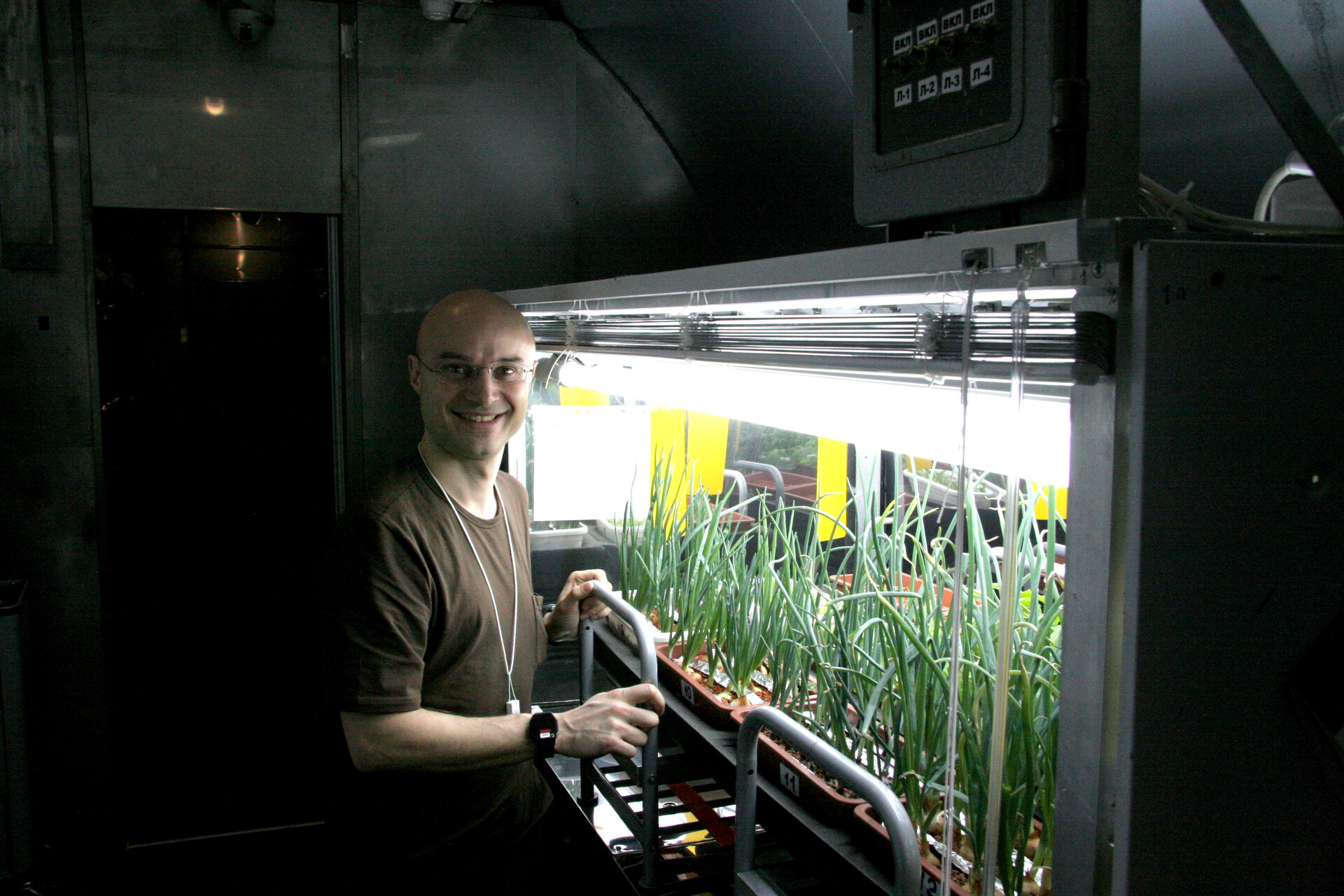 In his latest diary entry, ESA-selected Mars500 crewmember Cyrille Fournier describes how the six-strong crew is starting to prepare for the end of the 105-day simulated Mars mission inside the special isolation facility at the Institute of Biomedical Problems in Moscow, Russia.

Having started a new calendar month as well as our penultimate week in the module, we are somehow preparing for the exit. Or if not us, at least the people on Earth! Indeed we have the feeling that things are hastening on our planet: we received the timetable for 14 July and know, if not in detail, at least what we will have to go through once back on Earth. But this is another story!

While it is getting hectic for ‘Mission Control’, we are still keeping our usual everyday pace, both during work and leisure time. Our work activities have been dominated this week by four main experiments. The first we had to perform, on a chronological basis and for the purpose of a Russian-European scientific programme, was an expired air collection, lasting seven hours and carried out on an empty stomach. Then, for the last time, we slept with the 128-electrode cap to give an Italian team data on our brain activity during sleep.

We also continued training on docking a Soyuz spacecraft to the ISS. As we are coming to the end of our journey, we finally switched to the ‘real’ simulator. Using this we could feel the real behaviour of such a spaceship when igniting the engines in order to correctly position the Soyuz capsule, right up until we connect it to the ISS. Of course, this simulator is not the real Soyuz environment and cannot simulate failures or abnormal behaviour like the real simulators at Star City. But the controls are the same and it was still interesting to perform such exercises.

Eventually, we performed the same series of tests as Oliver described for our ninth week in isolation, to measure the influence of loneliness on working tasks, motivation and performance.

But we did not stop there! Sergey, our commander, who is also so perfectly taking care of our greenhouse, invited Oliver and me to plant whatever we wanted, as we had free spaces. We decided to grow radishes, mustard, ‘Chinese cabbage’, onions, and salad. We do have plans though, while figuring what seeds to drop in... We hope that all these plants will be ready by 13 July so that we can enjoy our last home-grown salad before exiting our module!

On a less scientific level, when we had diner all together last Wednesday (1 July), our Russian crewmates suddenly remembered that one year ago, they were also in this same place and that they could consider, as some kind of tradition, to be locked together in this precise module every 1 July! Indeed, last year, the first dry-run isolation experiment had been carried out within this newly renovated module, locking in a team of six Russians (including four of our current crewmates) for 15 days!

We even thought that if this happens again next year for some of us, we can even say they will still be there one year later, in 2011, as the 520-day isolation will include the 1 July for both 2010 and 2011. But I guess for almost all of us, except maybe one, we know that participating in such an experiment is a great pleasure and we do not want to keep going as other people may tremendously want to experience this!

Moreover, on another interesting point, I have to thank Sergey. Indeed, he attentively attended ballroom dancing courses when he was a teenager and remembering some useful hints, he gave me excellent advice for… practicing my waltz! As I will get married exactly a month after we exit the module, it may be helpful for me to know a couple of steps. So as he was playing some waltz chords on his guitar, I practiced my steps for some time, repeating this a couple times during the week. To tell you the truth, I did not want to mention about the waltz, but as Sergey is always interested to read our weekly reports, he came to me 15 minutes ago while I was writing the first paragraphs of this report and told me not to forget to mention our waltz training! :-)

Finally, our week ended on a rhythm as calm as the rhythm outside is excited. This weekend was very quiet, especially for Oliver and me, as we were on shift Saturday and Friday respectively. Sunday was almost free, except still for the fluid collections (urine and saliva), the ESA standardised measurements, which include a 20-minute ECG recording at complete rest, and the usual battery of American tests.

Besides this, we read a lot. Oliver was absorbed in a Russian book, whilst I came to the end of another Dumas book. Together with our Russian crewmates we also watched many episodes of a very popular and funny series broadcast on Russian TV. As they do not have time to watch these because of their intense working schedule during their usual daily lives, they brought along two or three years worth of this series! Not a bad idea. We all appreciate this, when time permits…

Lastly, I would like to give a great big hand to a medical doctor, also backed by ESA, who is currently enduring the harsh climate somewhere 1000 km away from the South Pole. Alex Salam is indeed one of the two medics, in charge of the crew as well as scientific research, who volunteered to spend a year at Concordia research station, in the Antarctic. Considering the environment there, it is definitely also some kind of isolation! And while we will soon enjoy the summer temperatures in Moscow, we will not forget that Alex will be in the middle of winter, in complete darkness and with temperature as low as -80 degrees Celsius. Bravo Alex! We all here wish you good luck until the end of your six-month winter (at least) as well as good results for the scientific experiments you are implementing!