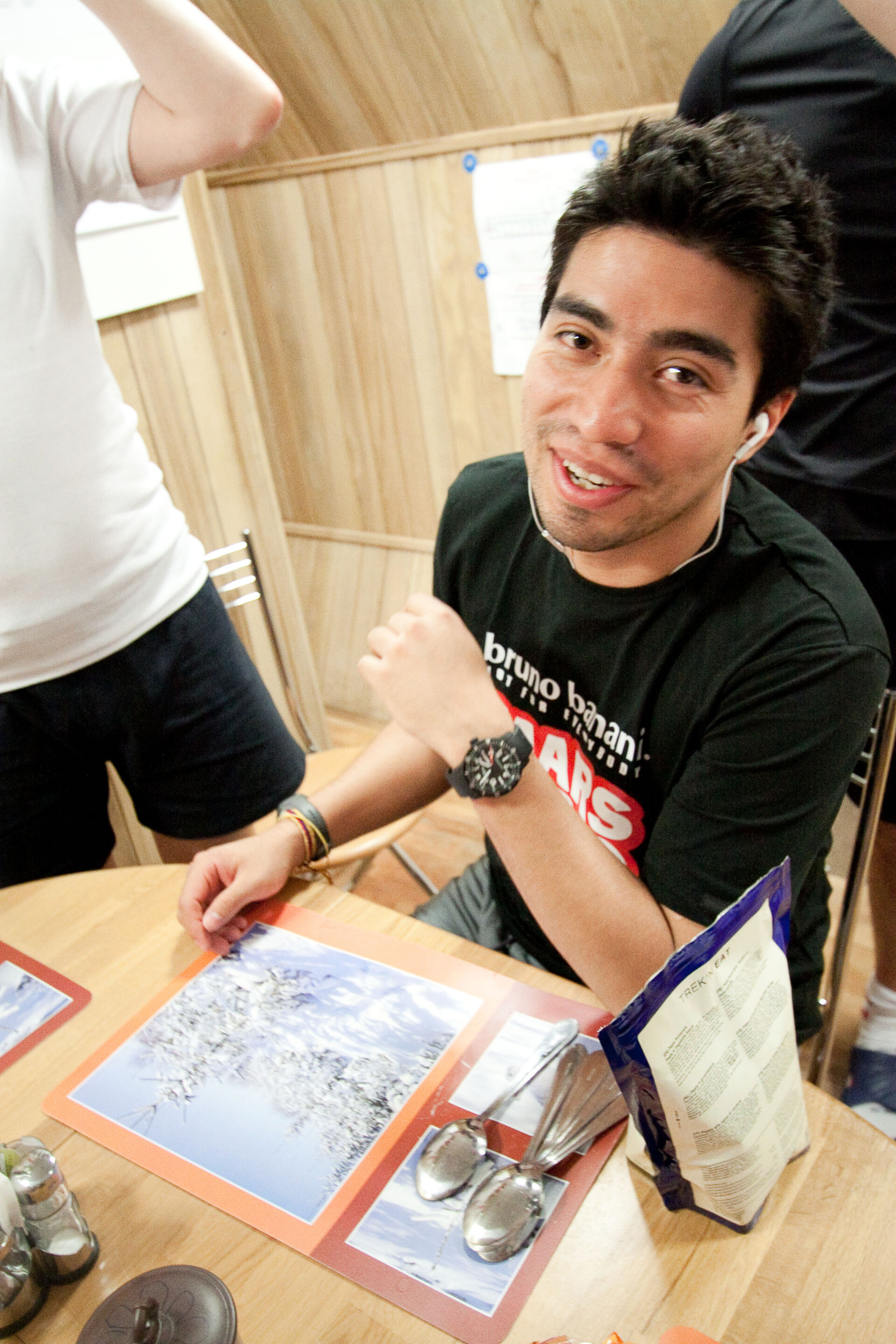 Diego writes in his second diary entry about their new home. Home, that will not only their home, but also their work, life and everything for 520 days.

The days of intense training before we entered the Mars500 modules seem now sort of far. But we can certainly remember the last one, the day in which everything stopped being the preparation for something, when it all became the real thing.

It seemed a bit surreal seeing such a great amount of journalists and people from all around the world together, including our colleagues and friends who made our preparation possible and who we thank so much. From one minute to the next we were already inside, ready for the longest experiment of isolation ever performed.

Happy that we were allowed to say goodbye to our families and friends before entering the simulation (they came from really far away, as far as Colombia for me, and New Caledonia for Romain!!), we went into our rooms and took out the things we carefully had packed and put in some hours before, and arranged them in the cabin in the way that most pleased us. Posters, pictures and flags were all around the place in a heartbeat. Then, we went all and explored the modules in a more thorough way. We had had a dry run before, but this time it was a more intimate moment between you and the place that would host you for so long, trying to explore every corner ("unsuccessfully", as even now we still find new things every time). It was quite an exciting day for all of us.

But let me tell you about the crew that entered these modules a couple of weeks ago:

Romain is the Flight Engineer. He used to work at making sure that your Aston Martin and your McLaren car pieces had the best quality. So if you think he is a really well-organised-approach guy, you are right. He also always listens to what you have to say and is ready to help.

Alexei is our fearless Commander. He used to work in astronaut training at the Hydrolab in Star City, which is pretty cool for me since I was a trainee at ESA's European Astronaut Centre. He is quite friendly, fair and has an excellent overall view of what is going on in the ship.

Alexandr is officially a Researcher within the crew (one of the 3 that will simulate surface operations), although he is also one of the doctors on board; he did the same in the Russian Army. He is a great person to work with, very reliable and smart.

Sukhrob is our Doctor. He used to fix other people's hearts in a surgery room until space knocked at his door. He is lots of fun; even though he is very serious in his work, he always manages to pull out a loud laugh from you, no matter the situation.

Wang Yue is a Researcher, he used to work in astronaut training at the Chinese Astronaut Centre and thus is representing 19.6% of the population of the World. He devours a lot of books written in those cool chinese characters that I wish I could understand. He is a great researcher, very talkative and gives lots of insightful points of view. When you meet any of these guys, you are not really surprised they were selected for this mission.

Finally, there is me, I am a surface ops Researcher, who previously worked in astronaut training, analog simulations and satellite engineering, and am really enjoying this experience so far!

Until June 15th we were in Low Earth Orbit, docked to the ISS. During those days we could acknowledge if we were missing something, and request a transfer to our "spaceship". Afterwards, Alexei took the controls of the ship (using a simulator we use to learn how to dock/undock from the ISS) and separated us from the orbital outpost. We could then say "farewell home" for real and the transit of items from the outside was stopped.

The simulated spaceship that "undocked” consists of 3 large modules, divided in different areas. We have a gym (my favourite zone so far), where we do 1 hour of exercise every morning with a mix of devices similar to those they have in your favorite local gym, and some others more like those they have in your favorite Space Station. There is the storage room, in which we have to retrieve anything we need (clothes, experiments…). It is very large and its interior metallic (as opposed to the rest of the ship that has a wooden interior).

We have the medical module, in which anyone who eventually gets sick would go in quarantine, though it hasn't been the case in such a short time, knock on wood! The medical module is also where we do many experiments that need large hardware.

The living room is where we spend our free time if we like, or even can work on experiments that require only a PC. The first things you notice when you enter are the large TV set and the big hole with a submarine-like hatch that contrasts with the wooden walls and leads to the medical module. On the TV we can watch videos, listen to music and play videogames.

Right next to the living room, there is the kitchen (my second favourite place), where we have the meals all together. During some of those meals, irony hits us mercilessly when we eat trekking food from a brand whose motto is "food for your outdoors life".

Next to the kitchen, a succession of cabins follow. Our own 3 square meters per person in which we sleep. They are not as uncomfortable as they sound, at least not so far. We have a couple of shelves on which we can put personal stuff as well as the experimental material that we need on a daily basis.

These days we have spent them having our first contact with the real execution of some of the experiments. Making them work while the responsible scientist is not around is sometimes a challenge, but it gives us stuff to do, which is very important. In my free time, I have been also busy programming an email client and a twitter client that allow me to send and receive information in the structured way that is needed for mission control, just brushing up my programming skills! (I'm programming it on MATLAB, for the curious). I am halfway through “100 Years of Solitude” trying to fulfill the promise of reading all Gabriel Garcia Marquez novels. On a side note, my dreams at night are vivid and still involve people and situations from the outside, I can't help but wonder if at some point they will be all set in a wooden walled room and involve mostly talking body electrodes. Time will tell.

Romain, besides his work with experiments, has been busy with his training on the Big Mean Red Machine, which Mission Control would rather call MDS. It is a device designed to operate in space . As you know, when you are in orbit or in interplanetary flight, you are weightless and cannot lift weights to workout, so this machine gives instead a resistance to your movements with a really powerful motor, but the result is the same as weightlifting. I do a similar exercise with strong elastic expanders, but the MDS is way cooler in my opinion, looking forward to it! In Romain's free time, he has been reading some books (he was so happy when he found out there were Isaac Asimov's books on board!) and playing games (he is the best guitar player in the Guitar Hero band).

I hope you liked this first view of what is going on in Mars500 and you'll stick with us!