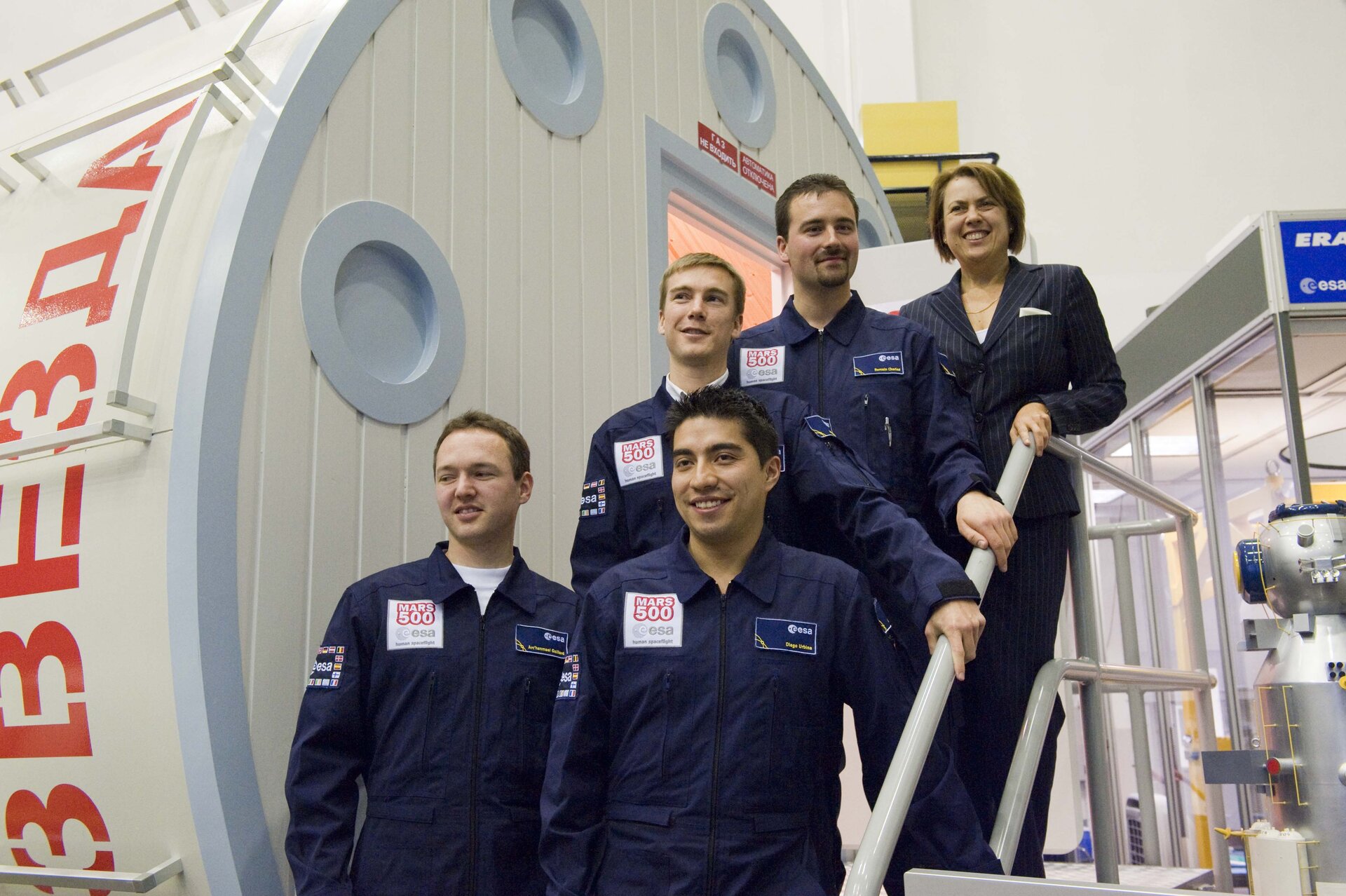 A crew of six, including two Europeans, will soon begin a simulated mission to Mars in a mockup that includes an interplanetary spaceship, Mars lander and martian landscape. The Mars500 experiment, as long as a real journey to Mars, is a test of human endurance.

Their mission is to mimic a full mission to Mars and back as accurately as possible without actually going there: Mars500 will be the first full-duration simulated mission to Mars, starting in a special facility in Moscow next summer. 250 days for the trip to Mars, 30 days on the surface and 240 days for the return journey, totalling 520 days.

There wasn’t much isolation yesterday on Monday 22 March though, when the four European candidates for Mars500 were presented to the press at ESA’s Technology Centre ESTEC in Noordwijk, the Netherlands.

Belgian Jerome Clevers, Arc’hanmael Gaillard, Romain Charles from France and Colombian-Italian Diego Urbina took a break from their mission training that began on 24 February in Russia, to meet the press. Two of the four will take part in the final 520-day ’mission’, along with three Russians and one Chinese participant.

“Mars is the ultimate goal of the global human exploration programme”, said Simonetta Di Pippo, ESA Director of Human Spaceflight. “In addition to developing the necessary space infrastructure for exploration missions, ESA’s Directorate of Human Spaceflight also has an ongoing programme of ground-based analogues and ISS research activities to make sure that our astronauts are as prepared as possible in the future for the physical and mental demands of long-duration exploration missions, and to develop countermeasures against any adverse effects of such a mission. Mars500 isolation study is a major milestone in this. The cooperation between ESA and Russia in this experiment is also an asset.”

Romain Charles (born 1979) is from France and is working as a Quality Manager for Sotira, which produces composite panels. Born in 1979, Charles lives in Saint Malo, France, and is – as his colleagues – highly motivated to participate in the study. “If I can help in going to Mars, I’m happy to sacrifice this time of my life for that.”

Jerome Clevers from Belgium is a Technical Support Engineer at the Turbomeca Safran Group in charge of global technical support for the helicopter engines. Born in 1981, Clevers lives in Bayonne, France. “The most difficult in the isolation study will surely be separation from my girlfriend and family, and the fact that you can’t open the window, feel the breeze and see the Sun.”

Arc'hanmael Gaillard from France was a member of the backup crew for the 105-day isolation period of the Mars500 study. He is a study and development engineer at Thomson R&D France working with the research and development of technologies for flat panel displays. Born in 1976, Gaillard lives in Rennes, France. “This is a real experiment, very much like a real spaceflight, and I’m just happy to participate.”

Diego Urbina, born in May 1983, has a joint Italian-Colombian nationality has a wide experience in space-related activities ranging from being a crewmember at the Mars Desert Research Station in Utah, USA in January 2010, to an outreach and educational activity organiser in the developing world. Prior to this he was an operations and astronaut training intern at the Neutral Buoyancy Facility of ESA’s European Astronaut Centre in Cologne, Germany. “This study is not useful only for Mars, but also for life on Earth.”

The 520-day isolation test is the last and core part of the Mars500 experiment that began back in 2007. The first phase in November 2007 was a 14-day simulation that mainly tested the facilities and operational procedures. The second phase followed in 2009, when four Russian and two European crewmembers were shut into the facility for 105 days on 31 March.

Mars500 is being conducted by Russia’s Institute of Biomedical Problems (IBMP), with extensive participation by ESA as part of its European Programme for Life and Physical Sciences (ELIPS) to prepare for future human missions to the Moon and Mars.

During the experiment, the crew will be hermetically isolated in confined space with limited consumables and communication only via the Internet, occasionally disrupted and with a 20-minute delay, as for a real Mars mission, due to the distance between the spacecraft and Earth.

The crew will be monitored and their psychological, medical and physical signs recorded throughout the mission. During the ‘surface operations’ after 250 days, the crew will be divided in half, three will move to the martian surface simulator and three will remain in the ‘spacecraft’.

The crew will have all the food needed from the beginning of the experiment and they will have to ration out their supplies for the entire time. The diet will be similar to that of the crews on the International Space Station (ISS). Tasks performed by the crew will be comparable to those of the ISS astronauts, but for a much longer time: maintenance, scientific experiments and daily exercise. They will follow a seven-day week with two days off, except when special and emergency situations are simulated.

This mission might lack some of the glory and feeling of the real spaceflight, but it will be just as tough. The first humans to walk on Mars will surely remember these pioneers.