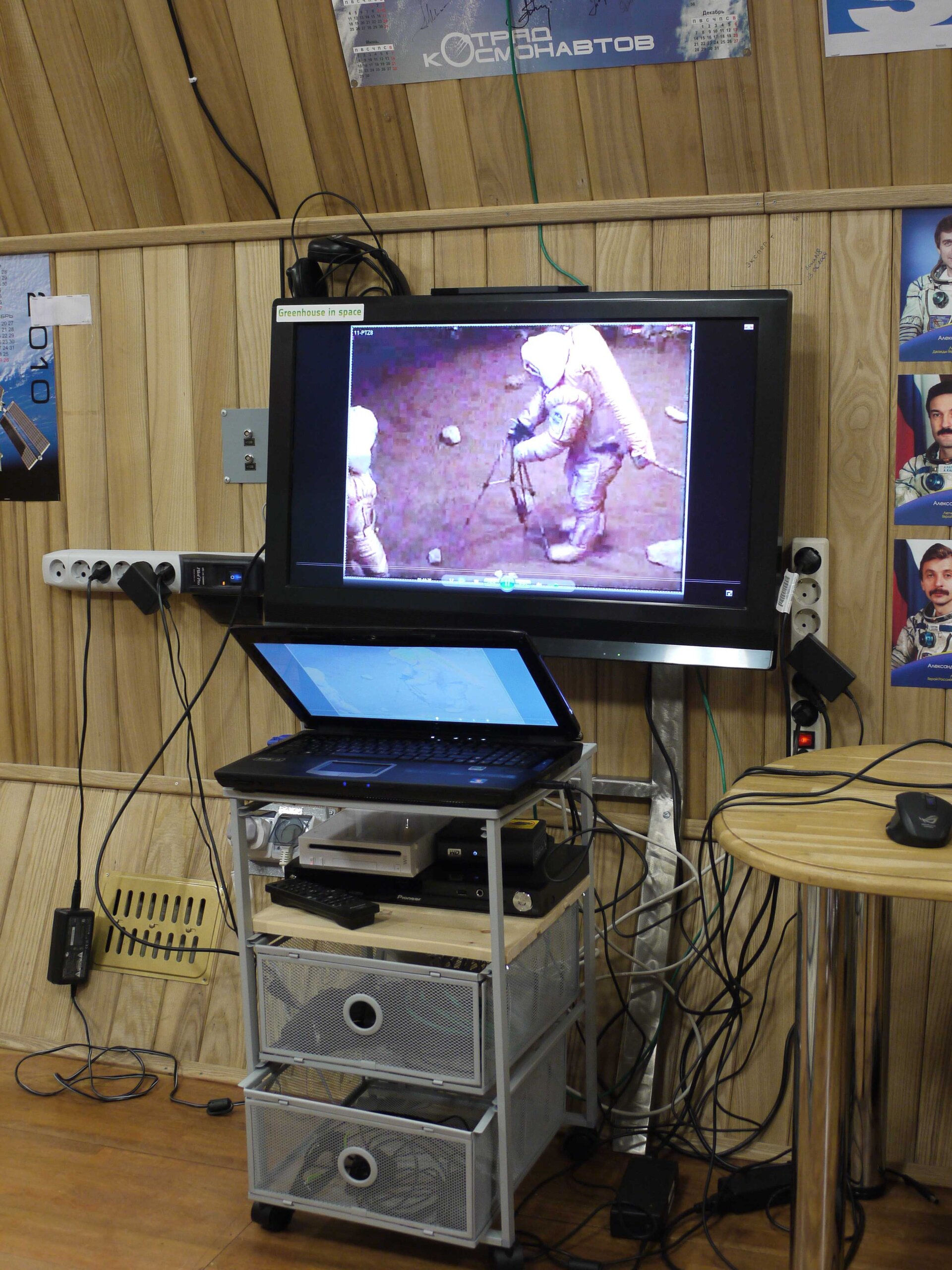 In the latest diary Romain writes about opening the hatches to the cargo-filled Lander, emptying it and preparing for the big event: ‘landing’ on Mars and going out for a walk!

For the last days of January, we were all very excited by the upcoming opening of the Martian lander. We talked a lot about our expectations during our meals until 1 February. On that day, we were scheduled to open the hatch at 11:30, after doing one ESA experiment earlier in the morning.

This experiment, called ’Leonardo’, assesses our physical capabilities. Actually it can easily be explained: you have to jump on a small platform…and that’s all! The trick is inside the platform, because several sensors will measure and analyse your weight, speed and acceleration throughout the whole jumping process. A physical analogy between the human body and a mechanical system allows the scientists behind the Leonardo experiment to monitor very precisely our capabilities and to see how they develop. During our training period they were even able to tell me, by putting a hand at about 60 cm from the floor, that “even if you train for years, you’ll never be able to jump higher than that.” I remember thinking happily at that moment “that high? Nice!”

Anyway, as we were all eager to open the Martian Lander, we performed our morning tasks very efficiently and at 11:00 all the data was saved and the equipment was stored. Even though everything was done, our commander Alexey asked us to wait for the exact time.

So, thirty minutes later, he was the one to open the two hatches leading to the Martian module. We all went inside it to discover a small place (50 cubic metres total) filled with boxes from the floor to the ceiling. After a few minutes we made a line from there to the gym. Alexey stayed where he was and he gave his boxes to Sukhrob through the small cylinder-shaped tunnel leading to our living module. Alexander and Wang Yue were the next ones in the line covering the whole corridor (in front of our rooms). I was inside the connection node receiving their supplies and giving them to Diego, who was storing the boxes in the gym. Our rhythm was high but our efficiency was very low during this process. The main reason is that the three hatches that we had to go through only allowed one box at a time. One by one we emptied all the food from the Martian Lander in two hours.

We stopped for lunch at that moment and we took this opportunity to open all the items left by our families. It was the merriest moment of our day. We discovered so many nice things that everybody was happy and smiling! We were going from one room to the next to show what we had and to look at the presents that the others received. The corridor was filled with a joyful energy.

After lunch we went back to work and we carried all our boxes from their temporary location in the gym to their shelves in the storage module. It was a bit quicker than in the morning, but still tough.

Later we went back to the Martian Lander with Wang Yue to have a better look at this new environment. Alexey joined us there and removed a panel from the floor: a lot of new boxes were hidden there! We started our line again to remove everything and 30 minutes later the food was in place in the storage module. Our evening was very cheerful despite our physical fatigue and, when the time came, we went to bed for a nice and deep sleep.

Our work wasn’t yet finished though, as we emptied with Sukhrob and Alexey the last remnants of boxes the next afternoon. Diego, Wang Yue and Alexander couldn’t help us for this activity because as soon as the Martian Lander was opened, they had to configure and test all the hardware that they will use during their mission on the surface. Since that day their schedule has been twice as busy as the orbital crew and it’s not rare to see them working until late at night.

The three main activities for which they are developing their skills can be summed up with three words: Virtu, Gulliver and Scaphander.

Virtu is a tool simulating the whole mission to Mars. It starts with the undocking of the lander and finishes when it’s back to the orbital ship. On this experiment the crew has to deal with a lot of different situations – nominal and off-nominal – like driving a manned vehicle or simulating an EVA.

Gulliver is the name of a real Mars rover with a robotic hand and covered with small cameras. It’s located on the mock-up of the Martian surface above our modules. Diego, Wang Yue and Alexander are driving it and picking up some specific items, like small rocks or sensors left earlier on the field.

The last item on the list, but also the most exciting one, is the scaphander, as the space suit is called in Russian. My three crewmates will do their first EVA on 14 February and they’re going through the last adjustments of their spacesuits. I’ll let Diego tell you his feelings about that because he’s the one inside!

Even if our days are quite long, we didn’t miss the opportunity to celebrate the date which is so important for Wang Yue and for all Chinese people. On the evening of 2 February we welcomed formally the New Year of the Rabbit in our suits!

The next diary note will be about our first EVA: Be ready!