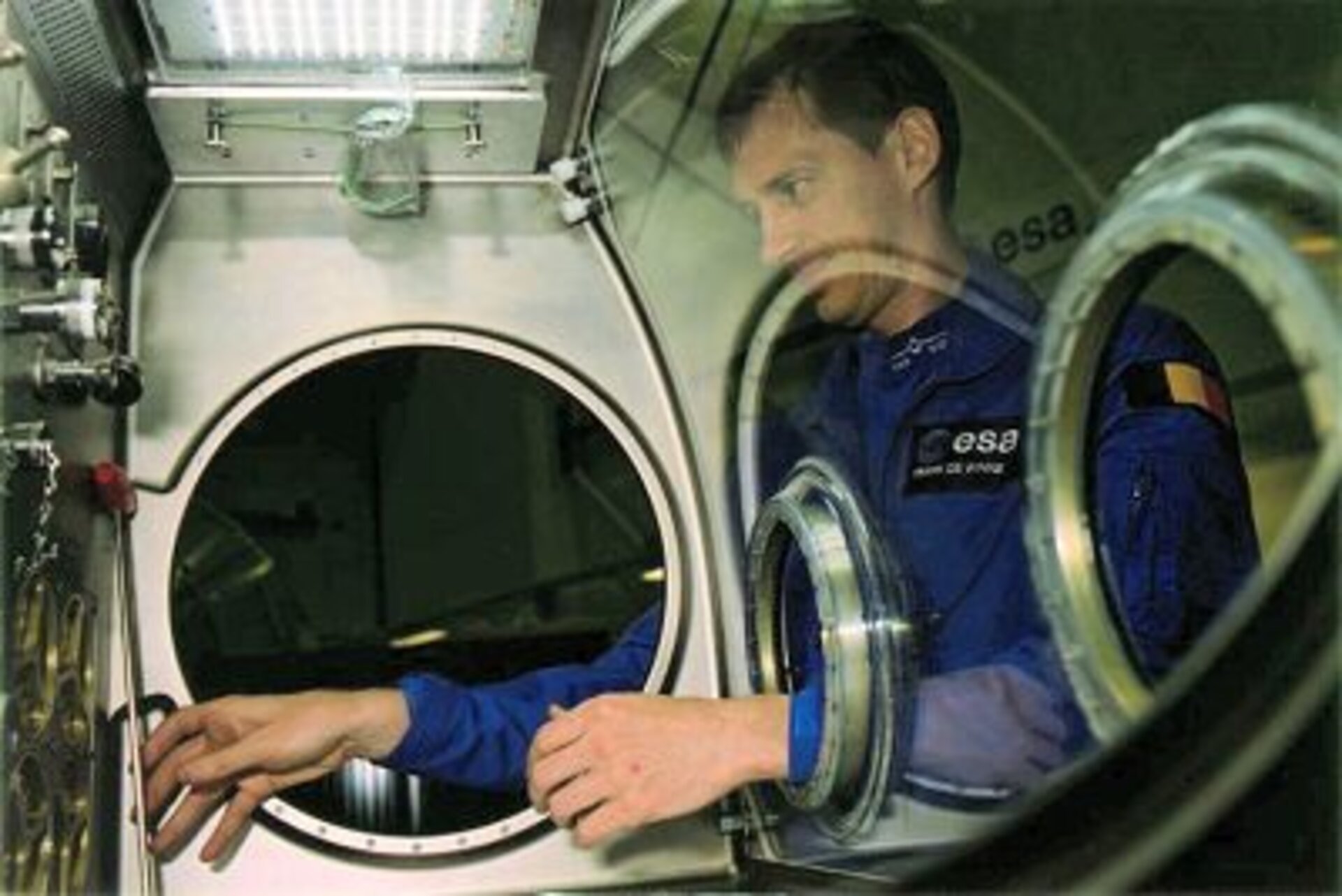 In preparation for his space mission Belgian ESA astronaut Frank De Winne has reached an important milestone. Less than five months before his departure into space he finished his last theoretical exams. He can now apply himself to the final preparations for his mission and the scientific experiments he will carry out on board the International Space Station (ISS) at the end of October.

"I did my final theoretical exams on the Soyuz-TMA, the Soyuz-TM and the International Space Station", says Frank De Winne. The Soyuz-TMA is the newest version of the Russian Soyuz spacecraft that will launch Frank and his fellow crew members from the Baikonur cosmodrome in Kazakhstan to the ISS at the end of October. As compared with the earlier version Soyuz-TM, the new Soyuz-TMA has been equipped with new instrument panels, new computers and adjusted software. There are also new procedures to learn.

What is a typical day for a European astronaut? "A typical day consists of four hours in the simulator, two hours of theory and two more of sports or preparations." The latter may be a consolation for many students: even for a space explorer exams are the hardest thing to do. "Training in the simulators is also physically tough, but I like doing it."

The next five months will be very busy for De Winne. He is spending the first days of June at ESTEC, ESA's technical centre in Noordwijk in The Netherlands. There he will practise especially with the Microgravity Glove Box (MSG). This is a closed work place of 225 litres, a bit like an incubator. By means of gloves, with the MSG, an astronaut can safely and efficiently handle experiments in the fields of material sciences, biology and chemistry.

From July on De Winne will get practical training on the Soyuz and Space Station simulators. He will also go to Belgium to prepare scientific experiments. In August he will spend a period in Houston in the United States, training with NASA colleagues.

In the meantime De Winne has made contacts for the Amateur Radio on the International Space Station (ARISS) programme. "I started practising as a radio amateur", he says. "I have a license, but practically speaking this is all new to me. On board the International Space Station we will make contact with school children in Flanders and Wallonia." ARISS has been set up in 1996 by amateurs in the United States, Russia, Japan, Europe and Canada - all partners in the ISS programme - and is a logical follow on to the successful contacts of radio amateurs with the former Russian space station Mir and with astronauts on board the space shuttle. Many astronauts on board the ISS have a license as radio amateur. ARISS offers an excellent opportunity for young people to get familiar with communications technology.

Does Frank De Winne miss his native country Belgium while he is far away in Moscow? "I always enjoy having contact with Belgium. But I'm now able to speak Dutch in Moscow too, because my Dutch colleague André Kuipers has arrived here to begin training, so we have a lot of contact."

He also has been on a visit with the Americans Kenneth Bowersox and Donald Thomas. Together with the Russian Nikolai Budarin, they will form the sixth permanent crew ('Expedition Six') of the ISS and they will welcome De Winne on the space station as a guest. "Don is a real fine cook, especially with Mexican food", gives De Winne away. If this gift will be of any advantage on the space station, remains however to be seen…

From July on Frank De Winne will share his experiences with the public by way of a diary, to be published on a dedicated ESA website.