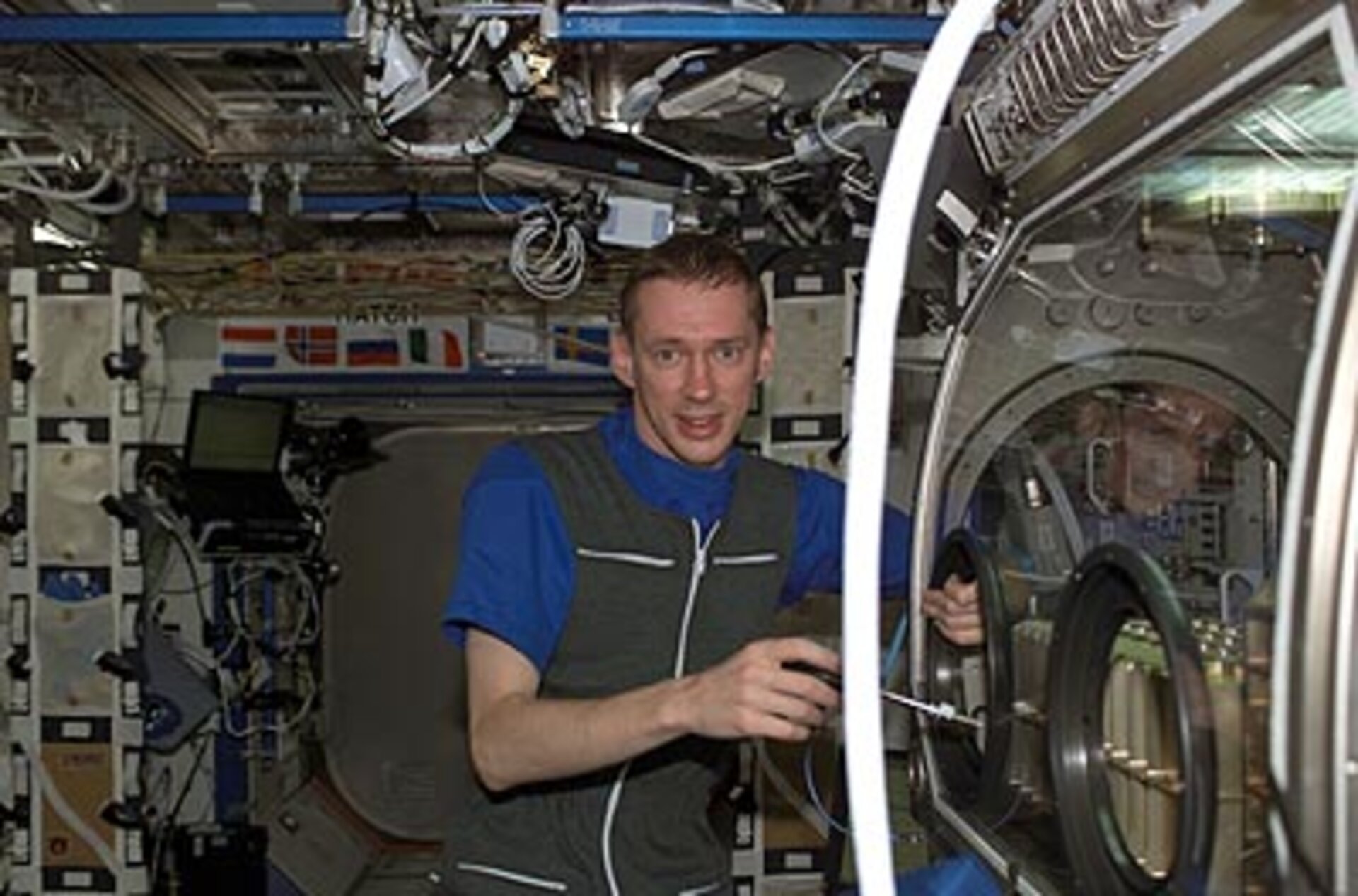 "I hope my flight will stimulate young people". A few days after his return Frank spoke about his experience.

On Sunday 10 November 2002, the Belgian ESA-astronaut Frank De Winne and his two Russian colleagues Sergei Zaletin and Yuri Lonchakov returned to Earth in the descent capsule of the Soyuz TM-34 after the very successful Odissea Mission on board the International Space Station (ISS). The Russian-Belgian crew delivered the new Soyuz TMA-1 to the Station and Frank carried out an extensive experimental programme.

Do you feel the lift-off from inside the Soyuz rocket?
Of course you feel some vibrations when the rocket engines are turned on beneath you. I didn’t have a special training for this part of the launch, but nevertheless this was not unexpected for me. When the four booster rockets separate you feel a big jolt, but I had practised this in the centrifuge. The launch mostly went as I expected.

And the landing?
That was totally different. When the parachutes open the capsule swings all over the place. This goes on for some time. You really seem to turn upside down. When the main parachute opens you feel a jolt again and the same scenario repeats itself. After that everything stabilizes. This is perfectly normal though. My commander Sergei Zaletin had told me about this beforehand, but it was worse than I had expected. The landing itself was a rather hard one. Because it happened during the night you couldn’t see when we were about to hit the ground. We tumbled around a few times and eventually the capsule came to rest on its side. The recovery team arrived very quickly. About ten minutes after the landing there were already people around the capsule. They first had to build a tent and because it was very cold outside we stayed inside the capsule for about half-an-hour.

After the landing, did you think, “We carried our mission to a successful conclusion”?
Of course. The landing and the opening of the parachutes are very critical phases of the flight. You can do very little about it. After we were stabilized and hanging safely under the parachute, I already felt more at ease.

You trained extensively for this mission. Were there nevertheless unexpected events during the flight?
A few unexpected things happened with the experiments. Most of the time we were able to find a solution for the problems. Unfortunately the experiment Nanoslab was a complete failure, but maybe it can be done during a future flight. The experiment should have started automatically in the Microgravity Science Glovebox (MSG), but it never did. At the moment I do not know exactly why.

What is your impression of the Space Station?
My first impression on entering ISS was that it was different to being in the training simulators. You can’t believe all the objects hanging on the walls, things are stored everywhere. Some parts of the Station felt bigger than I had expected, others – like the Russian part – smaller. But this is logical when six people are there together at the same time.

Did you get used to weightlessness quickly?
Weightlessness takes some time to get used to. In the beginning you don’t how to hold on, or even how to drink. So without thinking I squeezed on a small tea bag and the tea began to float away! On the ground you don’t have to think about this. Or hanging something onto the wall for instance. Even pushing very lightly makes you float away. It takes some time, but after a while you get used to it.

What has been the best part of the whole experience?
When I first took a look down at the Earth and saw the fragility of the atmosphere. The Earth is very beautiful from above. And also the amount of instruments, scientific equipment en technical material on board the Space Station, what is being done there, life on board… That was great.

How is your re-adaptation to gravity going?
It takes rather a long time before you are fully re-adapted. This can be measured, but as far as I can trust my own feeling, I'm re-adapted for the most part. Although I feel a bit tired in the evening.

What have you been doing since your return?
Mostly a number of new measurements for the medical experiments Cardiocog and Neurocog and some more medical tests. This is to compare measurements during the flight with data before and after the mission and to see how long it takes before the values reach pre-flight levels.

When does your flight completely come to an end?
That will still take a while. As far as I know the last medical tests will be done in about six months time. Here in Russia the flight is officially finished a few weeks after the landing with a technical debriefing. After the medical tests in Russia and the period of re-adaptation, which takes a few weeks, I will come to Belgium

What are your long term plans?
I will continue working for ESA, probably at ESTEC in Noordwijk (The Netherlands) or at EAC in Cologne (Germany). It will mostly be technical support for ESA projects such as Columbus, the ESA laboratory module that will be docked to the ISS in 2004, the Automated Transfer Vehicle (ATV), which will be launched to the ISS for the first time in the course of the same year or… supporting the flights of other ESA astronauts. There are many possibilities.

You are undoubtedly convinced of the value of ISS?
Of course, especially when you have been working, as I did, in the American laboratory [Destiny] and in the Russian part of the ISS. I'm absolutely convinced that you can do good science on board ISS. It is absolutely essential that our European lab Columbus is docked with ISS and that we have a crew of six or seven on board the Space Station [at the moment the permanent crew of ISS has three members].

Had you expected that Belgium would be so enthusiastic about your flight?
I had expected that there would be a lot of attention for my mission, but not the great enthusiasm. I am of course very happy about this, especially because of the interest the youngsters have shown in the flight. This was also one of the goals of the Odissea Mission: to stimulate young people to choose for scientific and technical jobs. I hope we have succeeded in doing this.