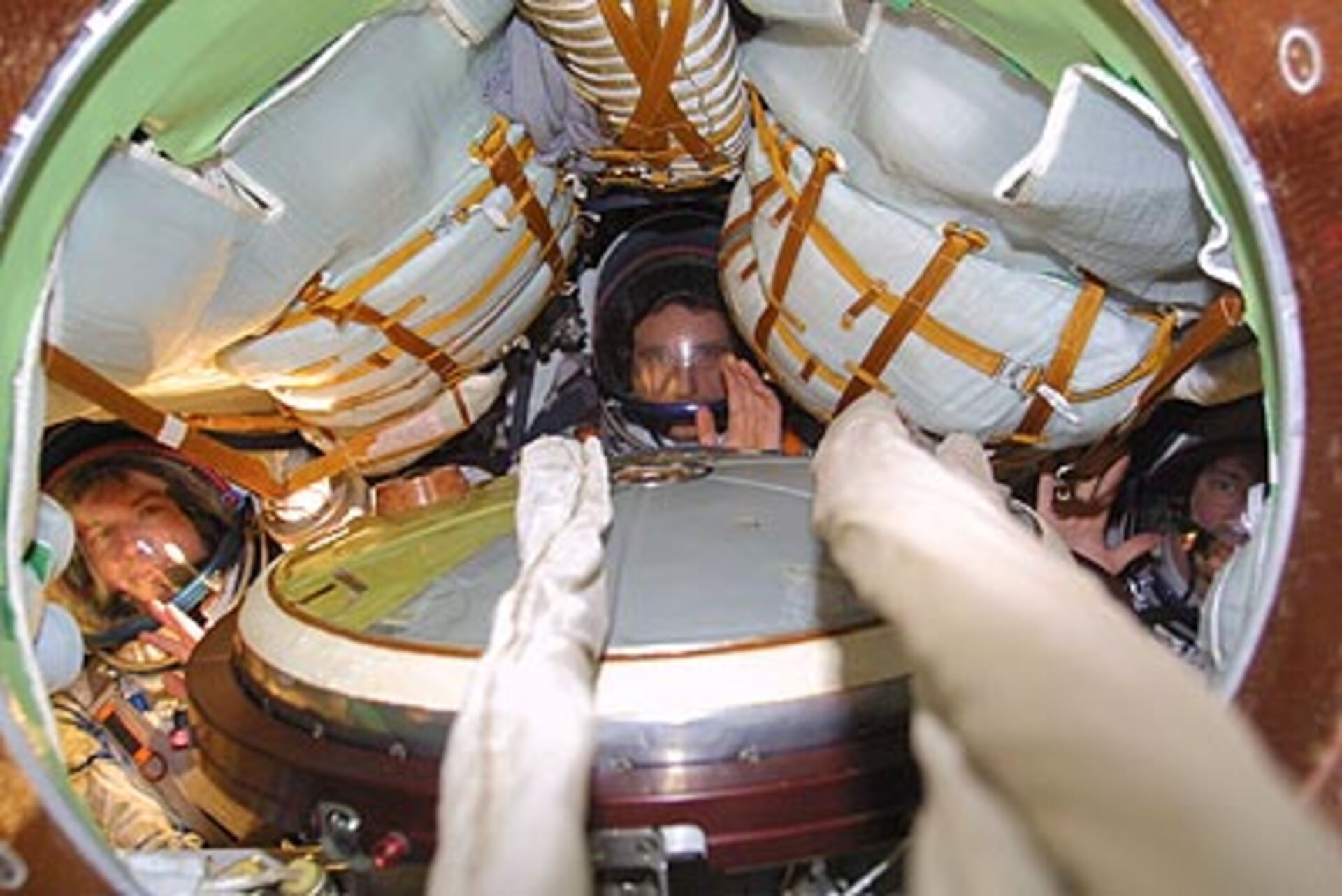 Internet chat with children
I just had a chat session with children for the Belgian children’s TV channel Ketnet. Mostly they ask me the usual questions. What do I eat in space? How do you go to the toilet up there? What am I going to do in the Space Station and on board the Soyuz? What did I study? They tell me that the children were very satisfied and enthusiastic. A one point there was so much interest that the server crashed.

Today we had a complete medical check-up for the last time, the so-called ‘Klinicheskiy Fisiologicheskiy Osmotr’ or KFO. Tomorrow, based on all our exams, the ‘big commission’ will decide if we are ready for our mission. Normally I would have departed for Baikonur on Wednesday, but that will probably happen a few days later.

In this way I will have some extra rest days here in Zvyozdni Gorodok (Star City) near Moscow. I should have had a few days of rest last week, but as a consequence of the extra lessons and procedures for the Soyuz-TMA, for which I had to study, we missed these.

My space mission probably will be delayed for just a few days. This depends on the conclusions of the commission, which is investigating the accident at Plesetsk. Their findings will be known next Tuesday.

Friday 18 October 2002: some minor changes to the Soyuz spacecraft

I had to study a number of changes which have been made to the Soyuz-TMA spacecraft. Today I’m taking exams that cover these changes. One of the instruments which controls the on board computer did not function in the way it was supposed to. This is nothing to worry about. The Soyuz-TMA will fly for the very first time and it is not unusual that a problem of this kind is found during the last integrated tests. My experience as a test pilot is also very useful in dealing with this matter.

Yesterday and today I visit the Baikonur Cosmodrome in Kazakhstan, where I will be launched into space. This is a place of historical events, like the launch of the first Sputnik satellite on 4 October 1957 and the flight of the first human in space, Yuri Gagarin, on 12 April 1961. Gagarin made his flight just a few weeks before I was born. I will leave Earth from exactly the same spot where the Sputnik and Gagarin were launched.

Today I will have a look at the Soyuz-TMA spacecraft in which I will fly into space and do a number of tests. My spacesuit will also be tested again.

In fact we will be rehearsing the whole procedure of launch day. It is the first time that we see our own spacecraft and this gives me a special feeling. I went inside and could really touch all the buttons and the equipment on board. This gives a different feeling than the simulators. Everything looks more 'real'. I thought we had just a little bit of space in the simulators, but the interior of the real spacecraft looks even smaller.

This is the second time I have visited Baikonur. In April this year I saw the launch of my Italian colleague Roberto Vittori. The third time I visit Baikonur will be for my own mission!

Wednesday 16 October 2002: reaction to the news

Today I'm leaving for Baikonur Cosmodrome in Kazakhstan. When I get on the plane in the morning we briefly discuss the news of yesterday’s failed launch. In Belgium this seems to get relatively a lot of attention. Our reaction is a rather quiet and serene one. This was an older rocket and another type of rocket than the one I will be launched with.

At the Plesetsk Cosmodrome in the north of Russia a Soyuz rocket with the unmanned research capsule Foton M-1 on board fails. A commission will investigate the cause of the failure and report its conclusions. After that I will know what the consequences will be for my own flight.