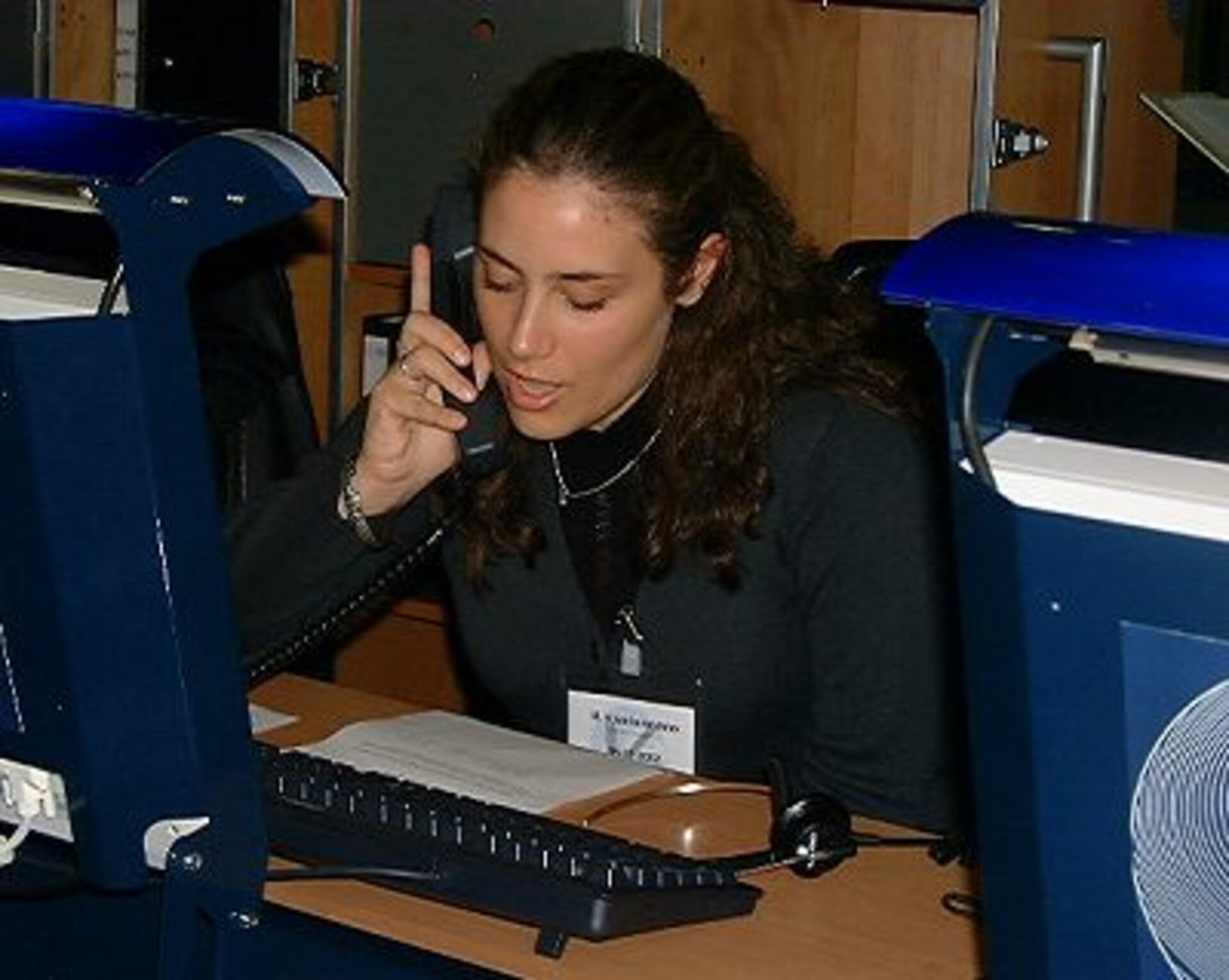 On 6 November six students who are participating in the SUCCESS 2002 contest got to talk to Belgian ESA astronaut Frank De Winne on board the International Space Station via an audio link-up. The students from universities in Scotland, Italy and The Netherlands spoke to Frank De Winne from within ESA's Taxi Flight Operations Coordination Centre (TOCC) at ESTEC in The Netherlands.

The TOCC is where ESA's Odissea operations team is located - here they provide all essential coordination and decision making functions for the mission, and interfaces to all partner control centres. The TOCC reacts to any changes throughout the mission - coordinating decisions and prioritising changes in the schedule to any of the European experiments. They liase with the mission control teams in Russia and America.

The SUCCESS 2002 contest offers European students the prize of a one-year internship with the European Space Agency, and the chance to see their experiment fly on board the International Space Station (ISS). As the connection lasted longer than was originally anticipated the students were able to ask a second round of questions.

The questions were ask by Joost Elstak who is studying Aerospace Engineering at Delft University, The Netherlands, and by Simona Lodato, Maria Rosaria Rusciano and Diana Pignalosa from Napels, Italy and Roberto Araújo and Maria-Joao Carneiro from Aberdeen University, Scotland.

If, in about 10 to 20 years, we would look back at the ISS-project, what do you think mankind will have learned from this gigantic project and in what way do you hope it will change society as we know it now?
[Frank’s answer was partially inaudible] …it is so impressive how people of different backgrounds, different cultures, speaking different languages can work together and achieve something so incredible.

What do you do with your free time during space missions?
Mostly I look through the window at the beautiful view below and communicate with my family at home.

Would you want to work hand in hand with students for the ISS?
I would be delighted to. When I was working at ESTEC I had the opportunity to work with students from the Technical University in Delft and enjoyed it very much. It is always exciting working with students, they always look at problems with fresh ideas. The students of today are the scientists and astronauts of tomorrow, the sooner they can get in contact with the ISS, the better.

Why are you landing at night?
It is indeed unusual that we are undocking at night. After undocking we make 2 or 3 orbits before landing in Kazakhstan where it will already be early morning. If we wanted to land later in the day we would have to stay at the Station for longer, but because there is a Shuttle arriving soon after we leave this is not possible.

What is the greatest hazard for long-term interplanetary missions?
There are many challenges for such a mission, but one of the big issues is that human beings will have to travel for 2 to 3 years to get to another planet, we have to know more about how people can live together in this environment and for so long, and how do they cope with knowing that there is maybe no way back to Earth? The ISS crew has an emergency lifeboat - they can use the Soyuz to return to Earth if they need to. Another big issue is the amount food that is needed on such a mission.

Do you have any difficulties in performing biological experiments in the ISS since you are not a scientist?
I only have to carry out the instructions that the scientists have given; I don't have to be a specialist in science to be a good operator!

At the close of the call, Frank said how much he had enjoyed talking to the students and hoped that he would soon get the opportunity to share his experiences with them in person. Frank also expressed his gratitude to the many people involved supporting the Odissea mission on the ground behind the scenes and for "supporting this great flight".