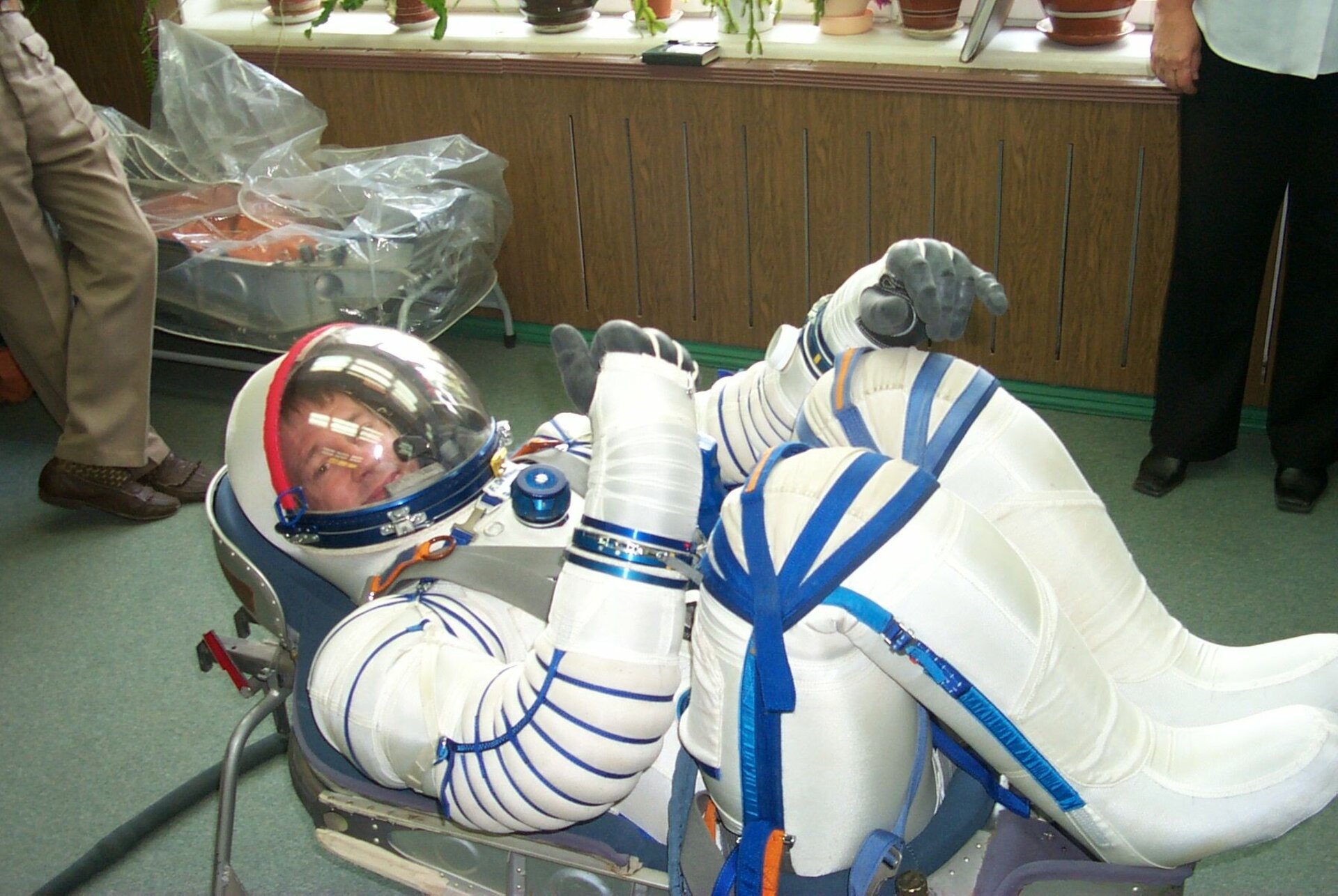 Today I went to the Zvezda ('Star') factory where I tried on my real space suit for the first time. The Russians call the suit skafandr. You have to test, amongst other things, if you can stay and lie down in your chair without your blood supply being cut off or your legs going to sleep.

If the pressure falls away you might have to stay seated in your pressurized suit for up to two hours. If this happens it is almost impossible to move. My suit has been made to measure. Except for one small detail, everything was OK. In September I will return to Zvezda when my space suit will be tested in a real vacuum.

Friday 9 August 2002: acceptance of the hardware for the experiments

Today I paid a visit to Energia in Korolev near Moscow. RKK Energia was established in 1946 and was named after Sergei Pavlovich Korolev. He was responsible for the first major successes in space such as the first Sputnik in 1957 and the first human in space, Yuri Gagarin, in 1961. Nowadays Energia is the prime contractor for the Russian manned spaceflight systems.

This is a very important day, because today the acceptance of a large part of the scientific hardware for my flight by Energia will take place. It means that this Belgian and ESA hardware will be officially handed over to the Russians. Last week the hardware was checked at Energia and it is now ready to go into space. Of course this is a major milestone in the preparation of my flight. I am here together with my commander Sergei Zalyotin and the commander of the back-up crew Yuri Lonchakov to see what the real flight hardware looks like.

The Russians are now responsible for taking the hardware to the Baikonur cosmodrome in Kazakhstan. From there the hardware will be launched to the International Space Station (ISS) by an unmanned Progress M1-9 cargo spaceship, prior to my own launch from Baikonur, now set for 28 October.

On board the Space Station we will have a large choice of food and drink. Over the next few days I will get to taste them. This will give me an idea of what I do and don’t like for when I am 'up'. Although it is no nouvelle cuisine, Russian space food tastes very good. The old days, when you had to squeeze your food out of a tube, are gone but of course sauces and ketchup are still in tubes. On board the Space Station we are able to warm up the food. The tables of the Station contain elements for warming up the food. You can put cans in them.

What am I going to eat? There is meat in tomato sauce, delicious chicken with eggs, mashed potatoes with onions, and vegetable ratatouille… I also enjoy drinking tea with sugar and there is fruit juice on board as well.