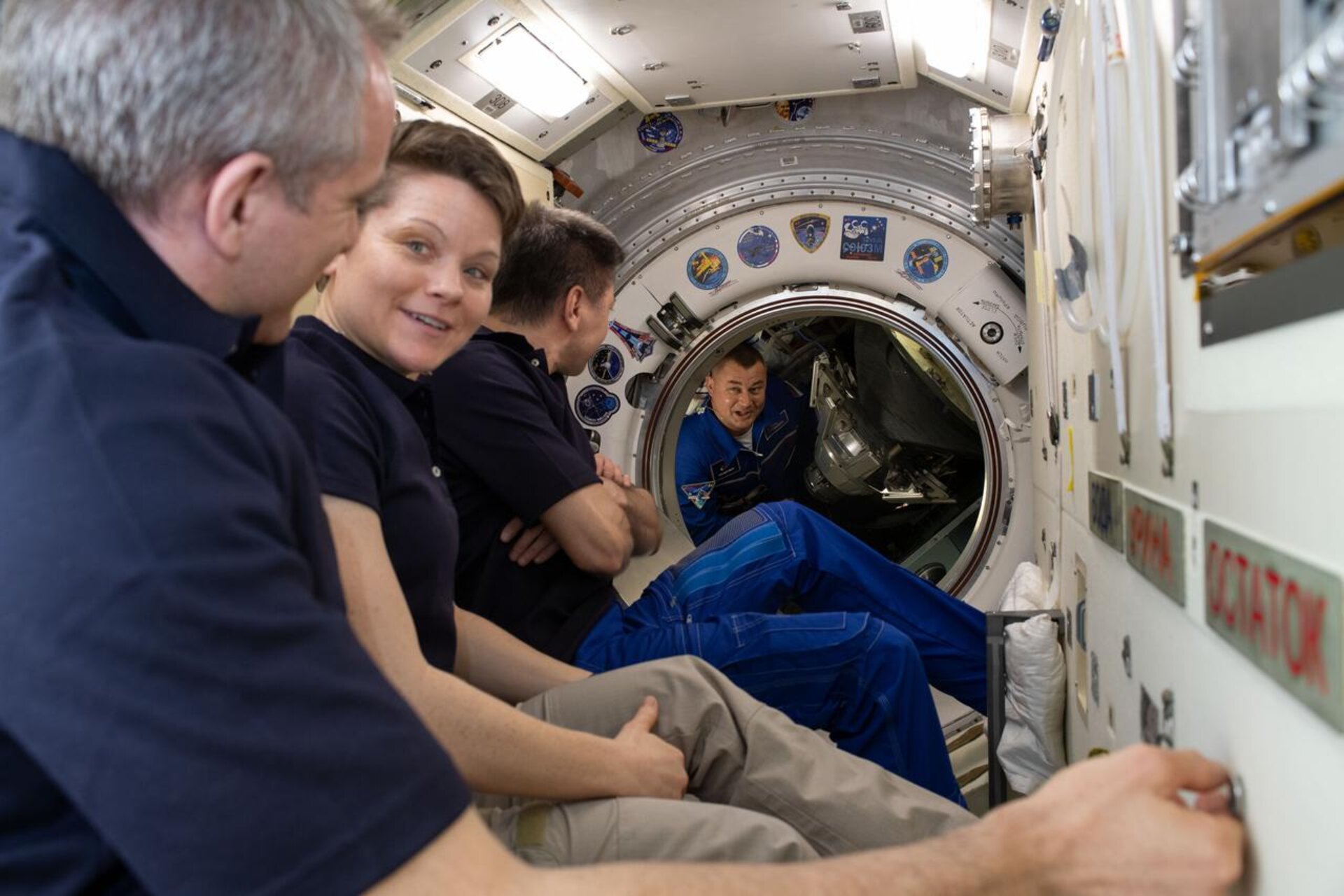 The crew on board the International Space Station has doubled in size. For the first time since NASA astronauts Drew Feustel and Ricky Arnold, and Roscosmos cosmonaut Oleg Artemyev left the Station in October 2018, the number of crew members is back at six and there is plenty of action ahead.

NASA astronaut Anne McClain, Expedition 59 commander Oleg Kononenko of Roscosmos, and David Saint-Jacques of the Canadian Space Agency officially welcomed NASA astronauts Nick Hague and Christina Koch, and cosmonaut Alexey Ovchinin of Roscosmos to the Station on Friday 15 March when the hatch of their Soyuz opened at 3:07 GMT (4:07 GMT).

Nick and Alexey were originally scheduled to join ESA astronaut Alexander Gerst, NASA astronaut Serena Auñón-Chancellor and Roscosmos cosmonaut Sergei Prokopyev as part of Expedition 57 in October, but abruptly returned to Earth following an anomaly with their Soyuz booster.

With a full complement, much is planned for the weeks ahead – including three spacewalks. It will be the first time Anne, David, Christina and Nick have stepped out into space and, when Anne and Christina don their spacesuits together on 29 March, the first ever all-female spacewalk.

With two of these spacewalks oriented around replacing old nickel-hydrogen batteries with newer, more powerful lithium-ion batteries, ESA astronaut Thomas Pesquet will also be on-hand to guide them through as ground IV at NASA’s Johnson Space Center in Houston, USA.

That is what is coming up, but what has been going on? Join us as we delve into the details of the past few weeks in this latest update from the International Space Station.

The crew of Expedition 58 have been busy with a wide range of science and operations. Between 11 and 13 March, Anne carried out her third session of the European Circadian Rhythms study in which she measured her core body temperature for 36 hours by wearing Thermolab sensors strapped to her forehead and chest.

David and Anne also performed the third of their six combined Time sessions in an experiment designed to quantify any changes to time perception in microgravity. This is the same experiment ESA astronaut Alexander Gerst performed during his recent Horizons mission. Wearing a headset to block out any external visual cues he performed a series of computer prompted tasks such as reproducing the length of a given event, estimating the amount of time elapsed, reacting to stimuli and judging the length of a minute.

Among other activities on Station, the Fluid Science Laboratory (FSL) was also activated for a Compacted Granulars run. Housed within the European Columbus Laboratory, FSL enables researchers to look at how foams, emulsions and granular materials behave in microgravity.

The Compacted Granulars experiment focuses on the behaviour of granules without the disturbing influence of gravity. Its findings could be used to improve the industrial processing of bulk solids, such as coal dust, flour and grain here on Earth.

In addition to all of this, there are a number of European experiments that run autonomously on Station.

Active and passive dosimeters continued to collect data for the DOSIS 3D experiment that aims to map radiation in all modules of the Space Station. Vessel-ID also continued its demonstration of the ability of a space-based radio receiver to identify ships in the open ocean. Mounted in the Columbus module, this system aims to help European entities better monitor ships for fishery control, search and rescue operations, maritime border control and law enforcement.