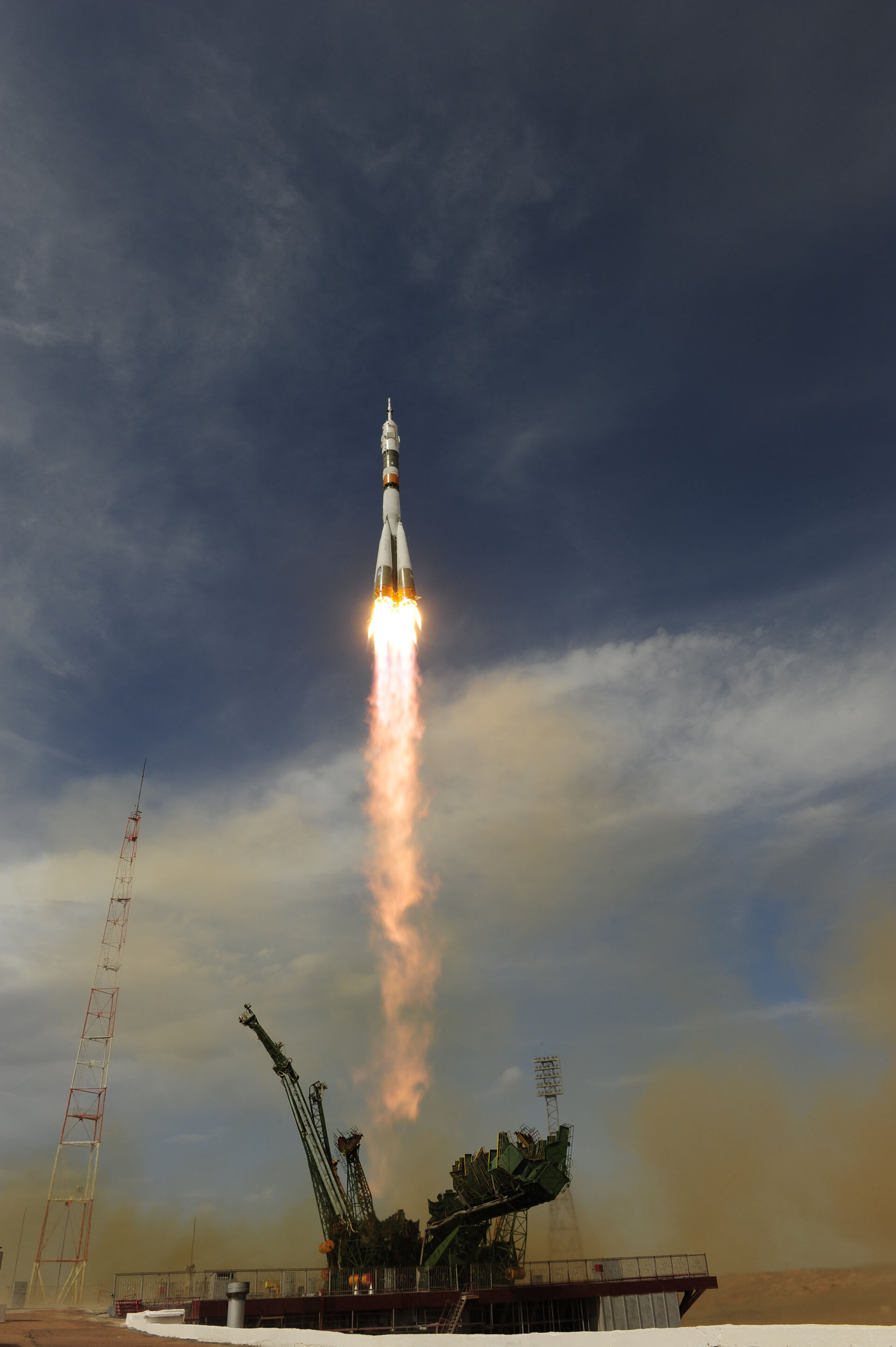 Their Soyuz TMA-15 spacecraft is scheduled to dock with the International Space Station (ISS) at 14:36 CEST (12:36 UT) on Friday 29 May. The arrival of De Winne, Romanenko and Thirsk at the ISS will mark the first ever six-member ISS crew, as they join the three Expedition crewmembers already in residence on the Station: Russian cosmonaut Gennady Padalka, NASA astronaut Michael Barratt and Japanese astronaut Koichi Wakata.

As ISS Commander, De Winne will be responsible, among other things, for conducting operations on the ISS, directing the activities of the ISS crewmembers as a single, integrated team, and for ensuring the safety of the crew and the protection of the ISS elements, equipment and payloads.

"Witnessing this launch is a great moment a moment of accomplishments that opens up new opportunities and projects us all in the full exploitation of the ISS in preparation of new exploration missions to other destinations. I am looking forward to a full 6 crew onboard the ISS for a full exploitation of its scientific potential and to carry out activities in preparation of missions to future destinations. We have had a very intense fortnight: the roll out of the Node 3, the selection of 6 new member of the European Astronaut Corps and now this milestone. Human spaceflight and exploration is gaining momentum and we will be working for Europe to seize bigger opportunities in this field ", said Simonetta di Pippo, ESA Director of Human Spaceflight.

"Last year Columbus and the Automated Transfer Vehicle Jules Verne have demonstrated the reliability and the capability of the Europan Space Agency in the International Space Station endeavour. The European scientific laboratories and instruments on board Columbus are now operated on a daily basis, controlled from the Control Centre in Oberpfaffenhofen (Germany). The crew of six will provide much more resources on board to make scientific and technological progress." said ESA Director General Jean-Jacques Dordain, witnessing the launch from Baikonur.

"The presence of two ESA astronauts on board the ISS this year – Frank de Winne and Christer Fuglesang - will bring a European touch to that crew. Even more, for the first time, the five partners of the ISS –USA, Russia, Canada, Japan and ESA - are all represented in the crew of six. I wish all of them a successful mission and I am confident that they will give once more proof that space is where international cooperation can express itself at its best, for the benefit of all of us, citizens on the Earth," Dordain added.

De Winne will also be the main operator of the Japanese robotic arm and will be one of the two astronauts who will berth the HII-Transfer Vehicle (HTV) to the ISS using the Station's robotic arm when the Japanese cargo spacecraft arrives at the ISS in September.

During the OasISS mission, De Winne will use the scientific facilities of the ISS, especially the European Columbus laboratory, to undertake a European programme of scientific experiments and technology demonstrations. These come predominantly from scientific institutions across Europe and include experiments in human physiology, biology, radiation dosimetry, exobiology, fluid physics and materials sciences.

ESA views education as a valuable aspect of its human spaceflight missions, helping to inspire the youth of today. As such, the OasISS mission will be the prime focus of ESA’s education activities during the mission, including a live lesson given by De Winne from the ISS.

De Winne is a goodwill ambassador for UNICEF Belgium, which provides an opportunity among other education activities for cooperation between ESA and UNICEF Belgium. This cooperation will be based on the common ground of water, and in support of UNICEF’s water, sanitation and hygiene campaign (WASH). Water is not only one of the most important basic elements of life as we know it and therefore the most important thread to follow when searching for life in the Universe, but it is also a very important resource for astronauts and spacecraft in orbit.

This is De Winne’s second spaceflight after taking part in the Odissea mission to the ISS from 30 October to 10 November 2002. He will be joined on the ISS by Swedish ESA astronaut Christer Fuglesang, who will fly as mission specialist on the 11-day STS-128 mission scheduled for August 2009.