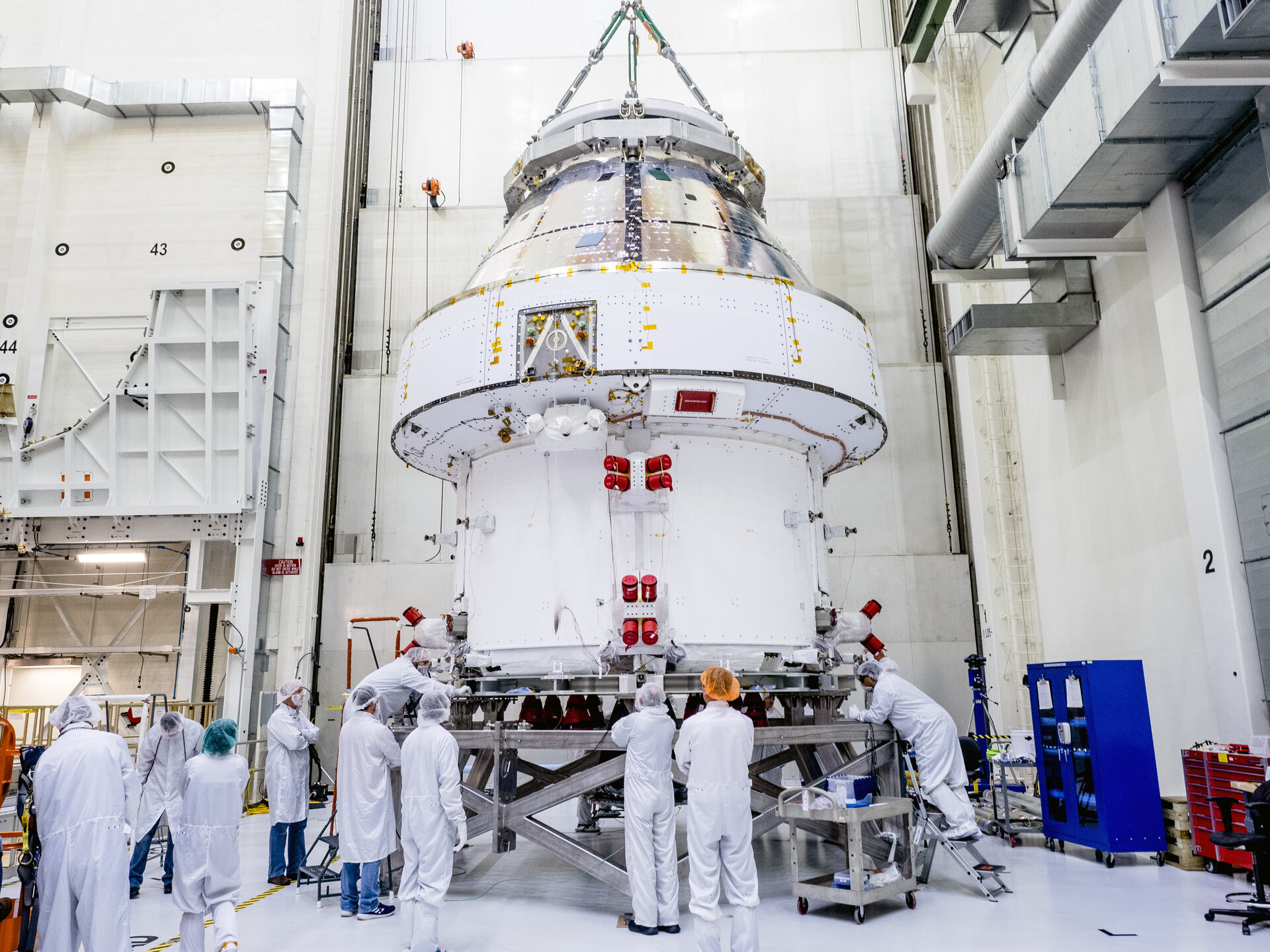 The Orion spacecraft that will fly farther from Earth on the Artemis I mission than any human-rated vehicle has ever flown before, arrived at NASA’s Plum Brook Station yesterday. This was the first voyage of the assembled spacecraft – the size of a two-storey house – that includes NASA’s Crew Module and Crew Module Adapter as well as ESA’s European Service Module.

The European Service Module arrived at NASA’s Kennedy Space Center in Florida, USA, from Bremen, Germany, last November where the three main parts of the spacecraft were assembled, joined and tested.

Further testing to ensure the spacecraft will withstand the extremes of spaceflight requires specialist facilities such as the world’s largest thermal vacuum chamber at NASA’s Plum Brook Station in Ohio, USA, where Orion will get its first feel of space.

The voyage to Plum Brook started over the weekend where Orion was carefully rotated from its vertical position and ‘shrink-wrapped’ for protection before being loaded into NASA’s ‘Super Guppy’ aircraft, one of the only air transport carriers capable of hauling such a large load.

Landing at Mansfield airport in Ohio, the spacecraft was secured to the interior of the aircraft cargo hold with attachment rings.

For the next 80 km of its journey Orion was hoisted onto a truck travelling north to Plum Brook Station. A ‘space corridor’ was cleared to allow the truck safe passage. Notably over 700 overhead lines were removed that would otherwise block the spacecraft’s way.

"The tests that will be run over the next few months will show that the spacecraft works as planned and adheres to the strictest safety regulations for human spaceflight,” explains ESA Service Module Manager for Orion, Philippe Berthe. “The European Service Module has 33 thrusters, 11 km of electrical wiring, four propellant and two pressurisation tanks that all work together to supply propulsion and everything needed to keep astronauts alive far from Earth – there is no room for error.”

Orion will be subjected to temperatures at Plum Brook ranging from –115°C to 75°C in vacuum for over two months non-stop – the same temperatures it will experience in direct sunlight or in the shadow of Earth or the Moon while flying in space.

Every electronic component emits an electromagnetic field that can affect the performance of other electronics – including your phone, computer and even an induction cooker. A second round of tests will check Orion’s resistance to these electromagnetic disturbances over two weeks to ensure that its electronics all function properly together, while in operation.

The tests are planned to start in December and will run for four months after which Orion will return to Kennedy Space Center for final preparations before launch.

“This voyage and the tests are another milestone in the trip beyond the Moon, but it is especially wonderful to see the complete spacecraft on the move,” says Nico Dettmann, ESA’s head of development at Human and Robotic Exploration. “Out of the clean rooms and out of context, you can really marvel at the size of the spacecraft and the feat of technical engineering that created the next-generation of human exploration.

“It is a testament to the wonderful teamwork of NASA, ESA and prime contractors Airbus and Lockheed Martin who designed and built it.

“The second European Service Module that will power Artemis II, Orion’s first crewed mission around the Moon, should be shipped to Kennedy Space Center in less than a year from now.”

This week Ministers are convening at the Space19+ in Seville, Spain, to decide the future course of the Agency and Europe’s exploration of our Solar System – including the funding for the next three service modules.