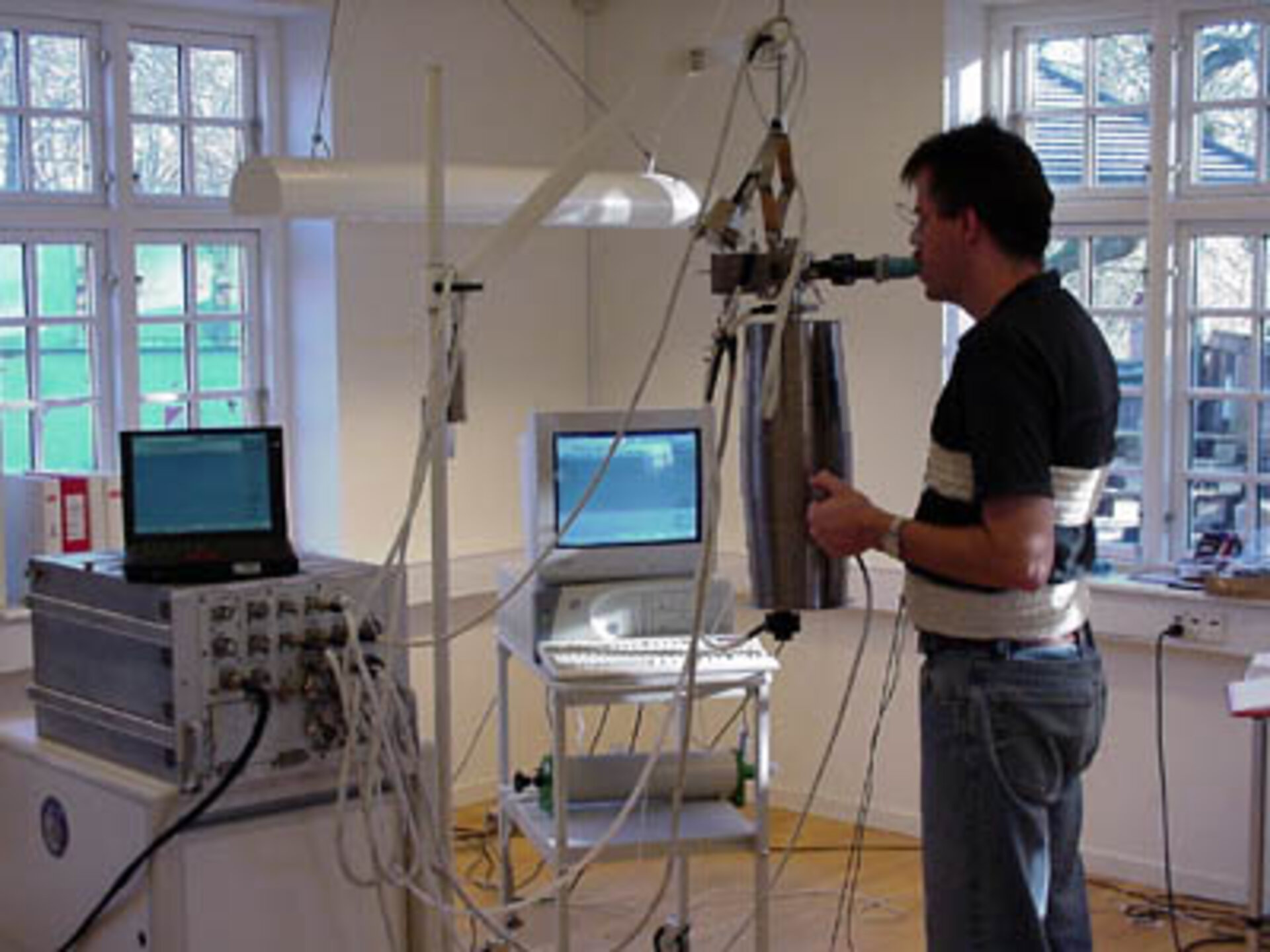 ESA has just delivered an interesting piece of new technology to NASA that will be part of the ISS Pulmonary Function System (PFS). Developed by the Danish company INNOVISION SA, the new device will analyse exhaled gas from astronauts' lungs and provide near-instant data on the state of crew health. And it will have important medical uses here on Earth.

"Normal air contains 21% oxygen and only a trace of carbon dioxide," explains PFS Project Manager John Ives. "A healthy body takes up oxygen and excretes carbon dioxide: at rest, the exhaled air is about 16% oxygen and 1% carbon dioxide. If the subject is exercising, the ratio of carbon dioxide to oxygen increases. It's a good measure of metabolic efficiency. And it can also reveal the 'deconditioning' effects of lengthy exposure to microgravity."

Breath analysis has been an important medical and research tool for many years. Until now, though, it depended on a device called a mass spectrometer, which is highly sensitive but requires highly skilled operators and is notoriously difficult to calibrate accurately. The PFS uses an entirely different approach: photoacoustics.

"We have been flying earlier versions since 1993," says Ives. "But our contribution to the PFS is fourth-generation technology, highly miniaturised."

The method depends on the fact that different gases absorb infra-red energy at different and very precise wavelengths. The new device divides the exhaled breath sample into several small test cells. Each of these is fitted with a window filter that admits only the exact wavelength that matches a specific gas.

Then the test cells are exposed to an infrared source, beamed through a spinning 'chopper wheel' - a disk with holes cut in it. "When the hole is in front of the window, the infra-red energy heats and expands the gas. When the hole has passed, the gas contracts again. A microphone picks up the pulses. Their amplitude - their 'loudness' - gives an accurate measure of how much of a given gas is present in the sample."

A puff of breath

Six different gases can be measured simultaneously, with several measurements being made within a single breath. And as well as telling scientists a great deal about their subject's lung function, the data also reveals much about blood flow and the entire cardio-vascular system. "It is almost as accurate as a mass spectrometer, but it's much easier to use," says Ives. "The mass spectrometer is really a lab instrument. The new device can be used in the field."

Or the hospital ward, which is why this new device is attracting serious interest from the medical profession. At present, doctors seeking to measure heart output from seriously ill patients often have to insert catheters into arteries - an invasive technique that is always difficult and can be dangerous. Now the same data can be obtained with nothing more onerous than a puff of breath.

PFS is the first flight hardware developed by the Microgravity Facilities for Columbus (MFC) Programme as part of the European Physiology Modules (EPM) project, originally planned for launch in the Columbus Laboratory.

Following great interest shown by NASA, ESA was offered an earlier flight opportunity to launch the PFS in November 2002, as part of the second NASA Human Research Facility (HRF) to be installed in the Space Station laboratory called Destiny.