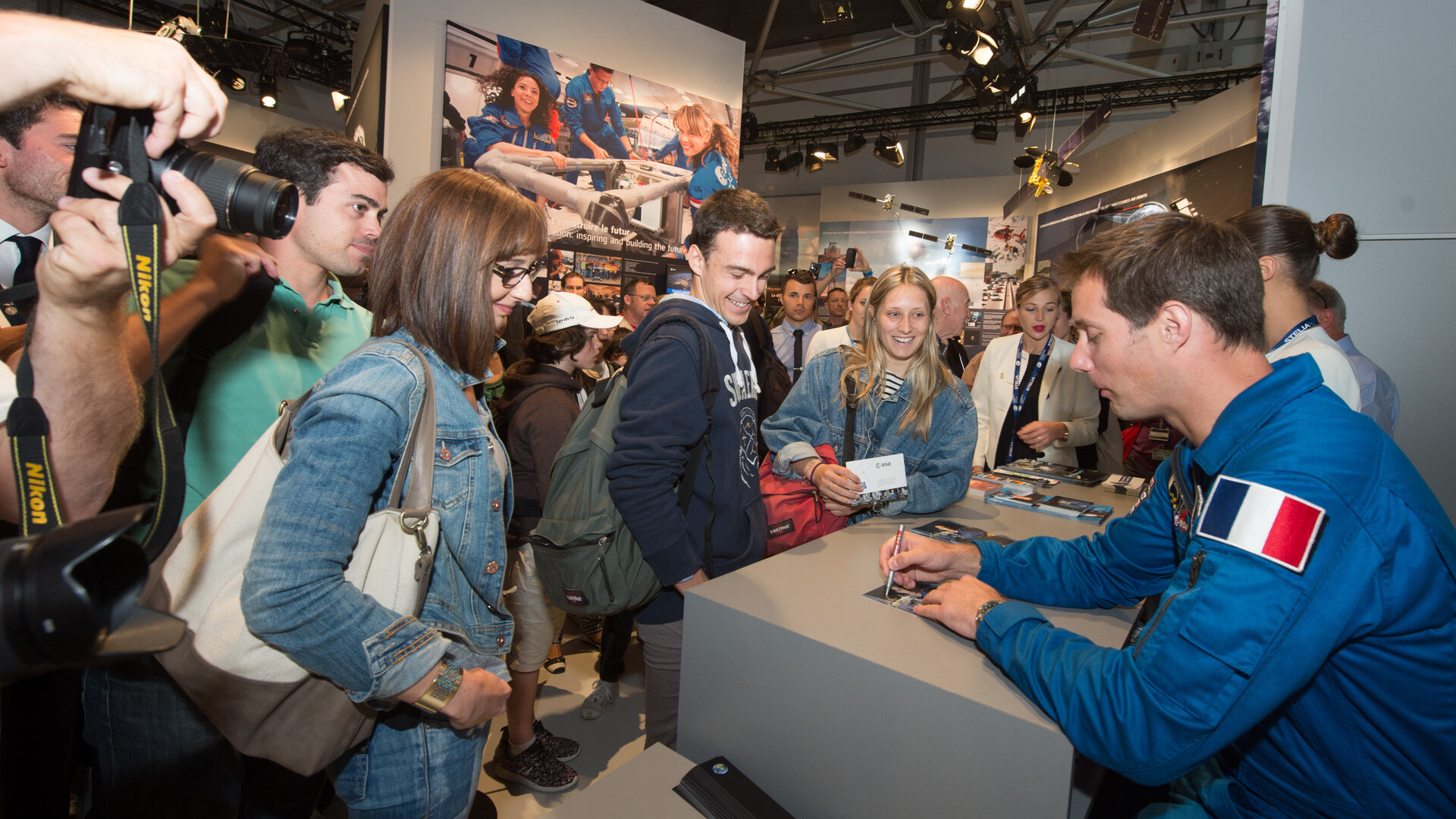 ESA astronaut Thomas Pesquet invited students of all ages to share the trip and the excitement of his space adventure. Proxima’s education and outreach programme included activities and teaching resources that helped to trigger the interest of students in science, technology, engineering and maths before, during and after the mission.

Primary and secondary schools in the UK were invited to use two credit card-sized Astro Pi computers equipped with a host of sensors and gadgets on the Station during ESA astronaut Tim Peake’s Principia mission. Following the success of the Astro Pi they stayed on the Space Station for use with Thomas.

During his mission, Thomas ran computer code developed by European schoolchildren for the Astro Pis.

Thomas grew some seeds in space as part of the CERES educational experiment. A special cargo of mustard, lentil and radish seeds were waiting for him on the Space Station. He watered them and took pictures at regular intervals to study how the seeds grow in space.

Schoolchildren on Earth compared notes with Thomas. They used the same type of seeds and followed the same procedures. The pupils learnt how space travel impacts growth and whether humans could one day produce their own food in space.

Enzymes are biological molecules that help complex chemical reactions occur inside the cells of living organisms. Without enzymes, we wouldn’t be able to digest food. With Thomas’s help, students on Earth investigated how the chemical reactions associated with digestion are influenced by microgravity conditions in a experiment called Cataliss.

Thomas had two syringes: one containing a protein gelatine and another containing pepsin diluted in an acidic liquid. Pepsin is one of the main enzymes that breaks down protein inside our stomachs. Thomas injected the pepsin solution from one syringe to the other and took pictures at regular intervals to document how the enzyme breaks down the protein in weightlessness. To help students compare results with Thomas ESA produced educational kits for schools containing the same materials and ingredients.

How do crystals grow in space? To find out Thomas started the Cristall experiment by preparing a saturated solution and injecting it into a bag containing an initial crystal – potassium sodium tartrate tetrahydrate, also known as Rochelle or Seignette salt. First prepared around 1675 by apothecary Pierre Seignette of La Rochelle, France, this crystal has found use in microphones and earpieces as well as in making mirrors.

Thomas took pictures of the experiment at regular intervals and shared the results with French students who received similar experiment kits. The schoolchildren learnt how gravity and the lack thereof influenced the growth of crystals.

Astronaut Thomas Pesquet joined the efforts of teachers on Earth in the quest to explain space science to their pupils. The astronaut recorded videos from the International Space Station demonstrating the phenomena that mentors find hard to show during their earthbound lessons.

Some lucky students and teachers also had the chance to see and talk to the astronaut through live video calls with the International Space Station. Thomas connected with them for a few minutes to answer their questions.

From the Space Station’s Cupola, astronauts have a privileged view to observe the beauty of our planet. However, its fragility, as well as global threats, are also more obvious when seen from space. Following up on a previous project by ESA astronaut Alexander Gerst, Thomas stimulated school children to think about environmental protection and sustainable strategies for the future.

ESA distributed a package of activities related to Earth observation to primary schools in Europe. A European-wide competition challenged the pupils to demonstrate how they are caring for our planet. Thomas announced the best three Earth Guardians during his stay in space.

Space technology is not all high-tech. Radios operated by amateur enthusiasts can be used to communicate with the Space Station. As he flied above Earth, Thomas talked to children using handheld radios over ARISS, the Amateur Radio on the International Space Station.

An ARISS conversation usually last for about 10 minutes, which is the window when the Station flies over a certain area and radio contact is possible from orbit. During that time, students were able to ask him questions about his life and work in space.

Writing competition
Thomas was a member of the jury for a French national writing competition organised by the Antoine de Saint-Exupéry Youth Foundation. On the 6 April 2017 anniversary of the publication of The Little Prince, Thomas unveiled the two winners of the contest by reading his favourite text from space.

Mission-X fever keeps spreading across the planet. Future space explorers got on their marks and invaded gyms to train like astronauts for the 2016 challenge. ‘Mission-X: Train like an astronaut’ is an educational programme in which thousands of schoolchildren aged 8 to 12 years from more than 25 countries do science activities and learn how to get fit.

Thomas kicked off the worldwide challenge talking about regular exercise and nutrition, both on Earth and in space. He took questions, gave tips on having a healthy lifestyle and shared his experiences in weightlessness.