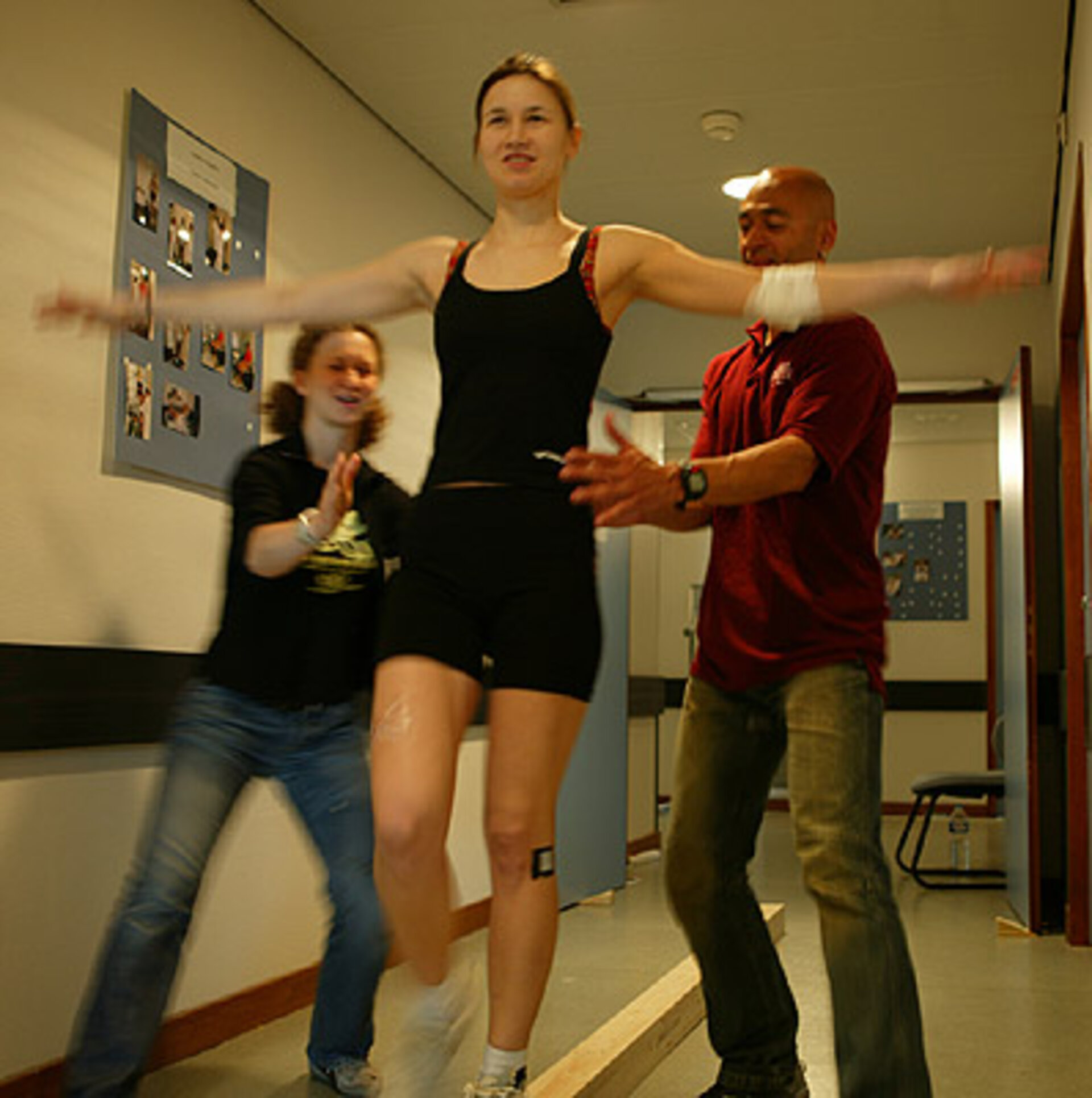 The day we got out of bed was very important to me. I was impatiently looking forward to it, the last two weeks in bed seemed to last for ever and by the time the moment arrived there was nothing I wanted more but to move – walk, run, cycle, swim – and I was getting more and more anxious about it. Finally the moment came! After 60 days of nothing big happening and not having much to do, there we were in the middle of everything, with lots of people around us - most of them asking us to do something!

It felt crazy, all those people talking at the same time. I couldn't concentrate on what they were saying because I wasn't used to all the strange sensations. For example during the bed rest I had to look up at everybody because of my position, and when I got up I realised not only that my eyes were at the same height as other people, but also that I was taller than most of them!

Everything seemed to be moving. While lying down we kept our heads in the same position all the time - after getting up it seemed like the whole world was moving around! That sensation lasted only a couple of hours, but it was really funny to notice.

The first hours were busy with tests: posture and walking, reflexes and balance. The doctors were telling me to sit down, but I didn't want to – I had been lying down for two months and now that I was able to I wanted to stand and walk, or preferably even run! At the end of the day I was exhausted and went to sleep very early, tired but happy.

The second day was very similar to the first: I wanted to walk more and more; it was really a great pleasure for me. I didn't have any pain in my legs or anywhere else, but I started to get blisters on my feet: they were not used to wearing shoes anymore.

I also was very curious about how much of my physical capabilities were lost in the bed rest, and it was on the second day when I tried to run and to jump. Running was not a big deal – I had a few coordination problems and my legs felt so long, but I could run – of course it was just a few meters because we were still inside the clinic.

Jumping was much more interesting: I did all the movements with my arms to bounce up and… I didn't leave the ground! My calf muscles were too weak to jump! It was a really funny feeling, as I was feeling good, and didn't know I wouldn’t be able to do it until I actually tried.

I think that the biggest change was in those small everyday things. It was nice to be able to take a shower without telling anybody about it, or being able to close the door of our room without having to call somebody and ask them to do it. I really enjoyed making myself a cup of tea and other small things – now it was possible to meet up with the others and have a chat, something I really missed during the bed rest.

On the third day everything changed. I had the flywheel test, which means I had to make my legs work a lot. The exercise itself wasn't any more difficult than before the bed rest – all you have to do is push against the machine as hard as you can. The only difference is the results, but you don't know them while pushing.

The worst thing came a few hours later – the pain in my muscles was really bad. The aching lasted a few days, as everyday there was another test to check my muscle strength and they never had time to get better.

After about ten days I finished all the tests and all I had to do in the clinic was the rehabilitation programme. According to the plan I should have been doing about one hour per day, but we could do more if we wanted to. And I wanted to do more... Those last 10 days in the clinic were nothing else but waiting to get out – to see friends and family, eat different food, to be able to walk outside and go wherever I wanted.

During the bed rest, I was longing to get up and didn't think much about getting out of the clinic. I think it was too far from reality to think about it seriously. Once I started walking though, all I wanted was to go outside.

The last 10 days of waiting were long, but finally that great day arrived! The moment I left the clinic, I remember feeling as if I was leaving home. It's strange, because most of the time when I was there I wanted to leave and go home, but after staying there for 100 days it became a part of me.