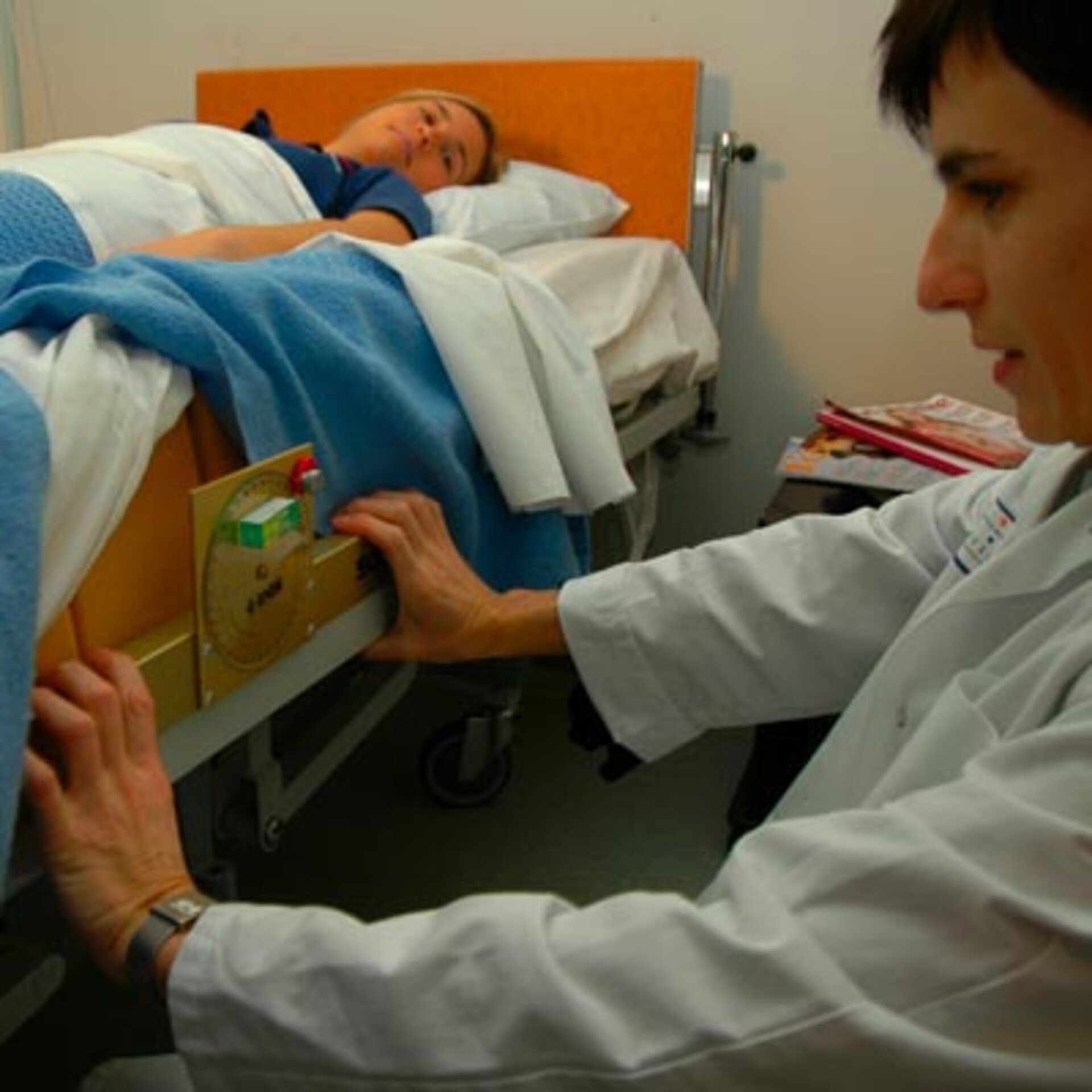 ESA PR 58-2005. When the first women astronauts set foot on Mars, they may spare a thought for the 24 women who paved the way for lengthy space trips by giving three months of their lives to space science, two months of which involved staying in bed.

From March to May and from September to November, two different groups of 12 volunteers from eight European countries - the Czech Republic, Finland, France, Germany, the Netherlands, Poland, Switzerland, and the United Kingdom - took part in the Women International Space Simulation for Exploration (WISE) campaign on behalf of the European Space Agency (ESA), the French space agency (CNES), the Canadian Space Agency (CSA) and the US National Aeronautics and Space Administration (NASA).

They gathered at the MEDES Space Clinic in Rangueil Hospital in Toulouse, France, to take up an extraordinary challenge: a 60-day campaign of female bedrest. For two months, they had to lie down and undertake all daily activities in beds tilted at an angle of 6º below horizontal, so that their heads were slightly lower than their feet. This unusual position induces physiological changes similar to those experienced by astronauts in weightlessness.

The last volunteers of the second WISE campaign got up on 30 November, and are now undergoing rehabilitation and medical tests lasting until 20 December. Similar tests were conducted in the pre-bedrest period for comparison.

MEDES, the French Institute for Space Medicine and Physiology, organised the selection of the volunteers and provided medical, paramedical and technical staff to support the extensive science experiments.

The main objective of the WISE campaign has been to assess the roles of nutrition and physical exercise with adapted equipment in countering the adverse effects of prolonged microgravity conditions, in order to develop the counter-measures that will be required when future astronauts venture beyond the Earth orbit to explore other worlds.

The data collected by the international science teams during the WISE study will improve our knowledge of muscle condition, blood parameters, cardiovascular condition, coordination of movements, changes in endocrine and immune systems, metabolism, bone status, as well as psychological wellbeing. This will serve not only the future of human spaceflight, but our everyday lives on Earth too, by providing clues as to how to deal with osteoporosis, fight the ''metabolic syndrome”, which affects millions of sedentary workers who take insufficient physical exercise, assist recovery of bedridden patients, or prevent some cardiovascular conditions.

Twelve scientific teams from 11 countries - Belgium, Canada, Denmark, France, Germany, Italy, the Netherlands, Sweden, Switzerland, the United Kingdom and the United States - are involved in the study. It will take them several months to analyse their data and start publishing their findings. In order to answer certain scientific questions, a follow-up of the volunteers will continue for three more years.

“The WISE campaign has now come to a successful conclusion and I look forward to further campaigns in the future where there is this degree of international involvement and complexity“, said Didier Schmitt, Head of the Life Sciences Unit in ESA’s Directorate of Human Spaceflight, Microgravity and Exploration. “Planning for future research is already under way with a programme of bedrest campaigns being prepared, covering the next three years. This will be a combination of short-term, intermediate and long-term bedrest studies, lasting 5, 21 and 60 days, respectively. A research announcement covering this period is due to be released in the near future as part of the European programme for Life and Physical Sciences and Applications using the ISS (ELIPS). A further two bedrest studies are planned, one in Berlin and the other at the DLR in Cologne and they have already been selected as part of the ESA Microgravity Applications Programme (MAP). These studies are currently awaiting the necessary funding, also from the ELIPS Programme.”

To mark the completion of the WISE 2005 campaigns, ESA, CNES and MEDES are to hold a press conference, together with representatives from NASA and CSA, science teams and volunteers from the second WISE campaign, at the "Cité de l’Espace" in Toulouse on 13 December.

Media representatives wishing to attend this press conference are requested to apply using the attached form, which should be returned to the address shown at the bottom of the form.

For additional information, ESA has created a website on the WISE study at: