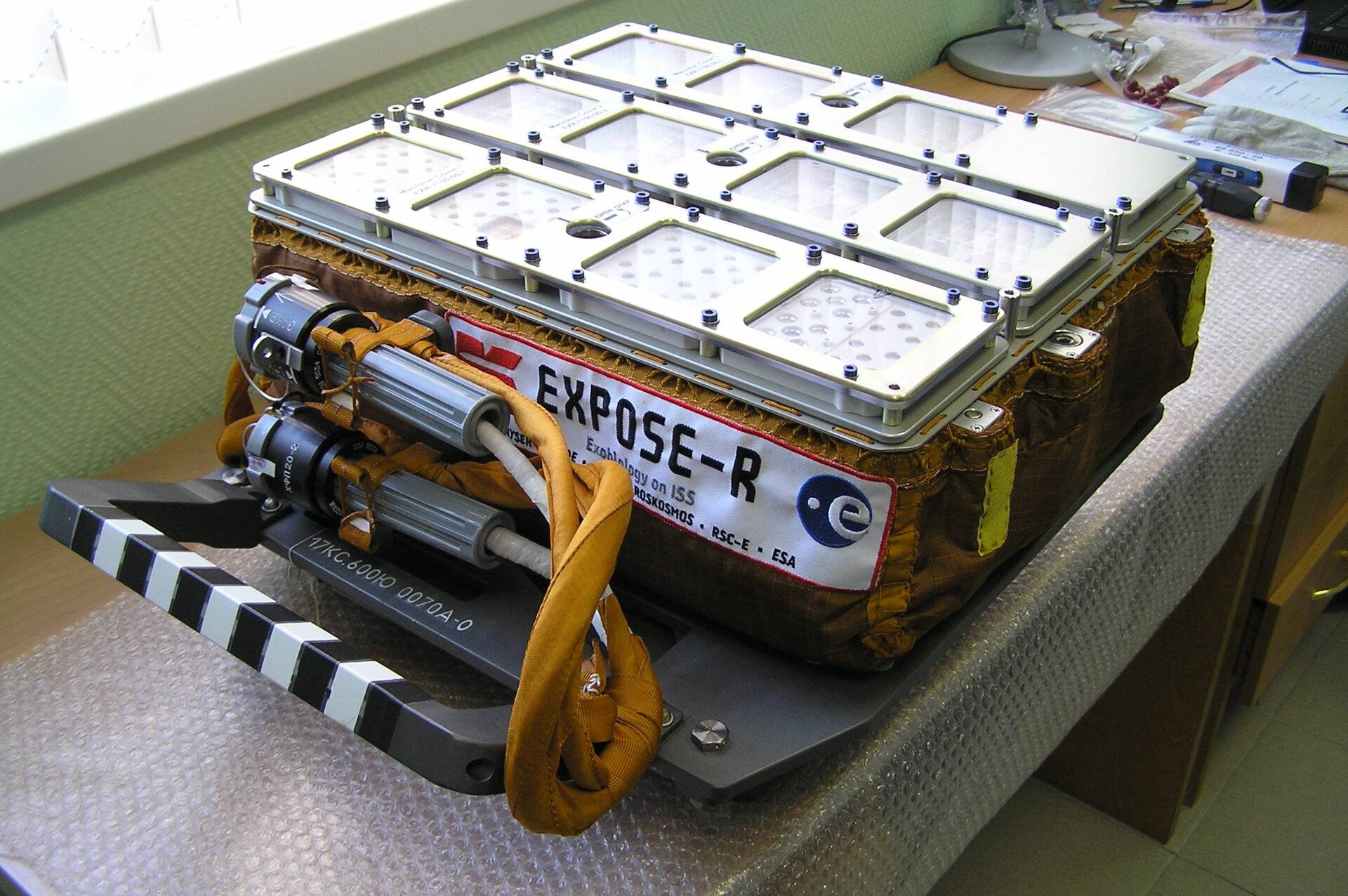 A suite of ESA experiments, some of which could help understand how life originated on Earth, is heading for the International Space Station on board the Russian Progress vehicle which launched from Baikonur Cosmodrome in Kazakhstan at 13:38 CET (12:38 UT) today.

The nine experiments are part of the Expose-R payload, which will be installed on the outside of the Russian segment of International Space Station (ISS) during a spacewalk on 19 December.

Expose-R is equipped with three trays, which are loaded with a variety of biological samples including plant seeds and spores of bacteria, fungi and ferns, which will be exposed to the harsh space environment for about one and a half years.

Away from the protective environment of Earth, the organisms will be exposed to solar UV, vacuum, cosmic rays and perpetual temperature variations as the Station continuously passes between areas of direct sunlight and the cold darkness of Earth's shadow.

Expose-R will accompany Expose-E, a similar, complementary set of trays filled with terrestrial organisms which is already installed on the outside of the European Columbus laboratory as one of the nine payloads of the European Technology Exposure Facility (EuTEF).

The Expose-R and -E experiments are part of ESA’s research in astrobiology - the study of the origin, evolution and distribution of life in the Universe. Some Expose experiments investigate to what extent particular terrestrial organisms are able cope with extra-terrestrial environmental conditions. Other Expose experiments test how organic molecules react when subjected for a prolonged period of time to unfiltered solar light (chemical evolution).

"With these experiments we are trying to understand whether life might have originated in space and arrived later on Earth. One condition to be fulfilled would be that life is able to survive the harsh conditions of space,” explained Martin Zell, Head of ESA’s ISS Utilisation Department.

At the end of the exposure period, the Expose-R trays will be retrieved from their location outside the Station and returned to Earth with a Russian Soyuz spacecraft. From the landing site in Kazakhstan the trays will be returned via Moscow to the Microgravity User Support Centre (MUSC) in Cologne, Germany. From there the samples will be distributed to the scientists for further analysis in the laboratory.

Also on board the Progress vehicle are a set of experiment containers which will be used next year in the Columbus laboratory's Biolab facility for a second run of ESA’s WAICO experiment.

WAICO, short for Waving and Coiling of Arabidopsis Roots at Different g-levels, looks at the growth of two types of Arabidopsis seed. The results of this experiment will contribute to a better understanding of plant growth processes and could help to increase the efficiency of agricultural processes on Earth.

WAICO was the first experiment ever performed in the Columbus laboratory. The WAICO-1 samples were returned to Earth with Space Shuttle flight STS-123 in March 2008.

Expose-E, Expose-R and WAICO are part of the European Programme for Life and Physical Sciences (ELIPS).

The Progress spacecraft, which will also deliver vital supplies to the ISS including food, water and fuel, is set to dock with the orbital outpost at 13:23 CET (12:23 UT) on 30 November 2008.