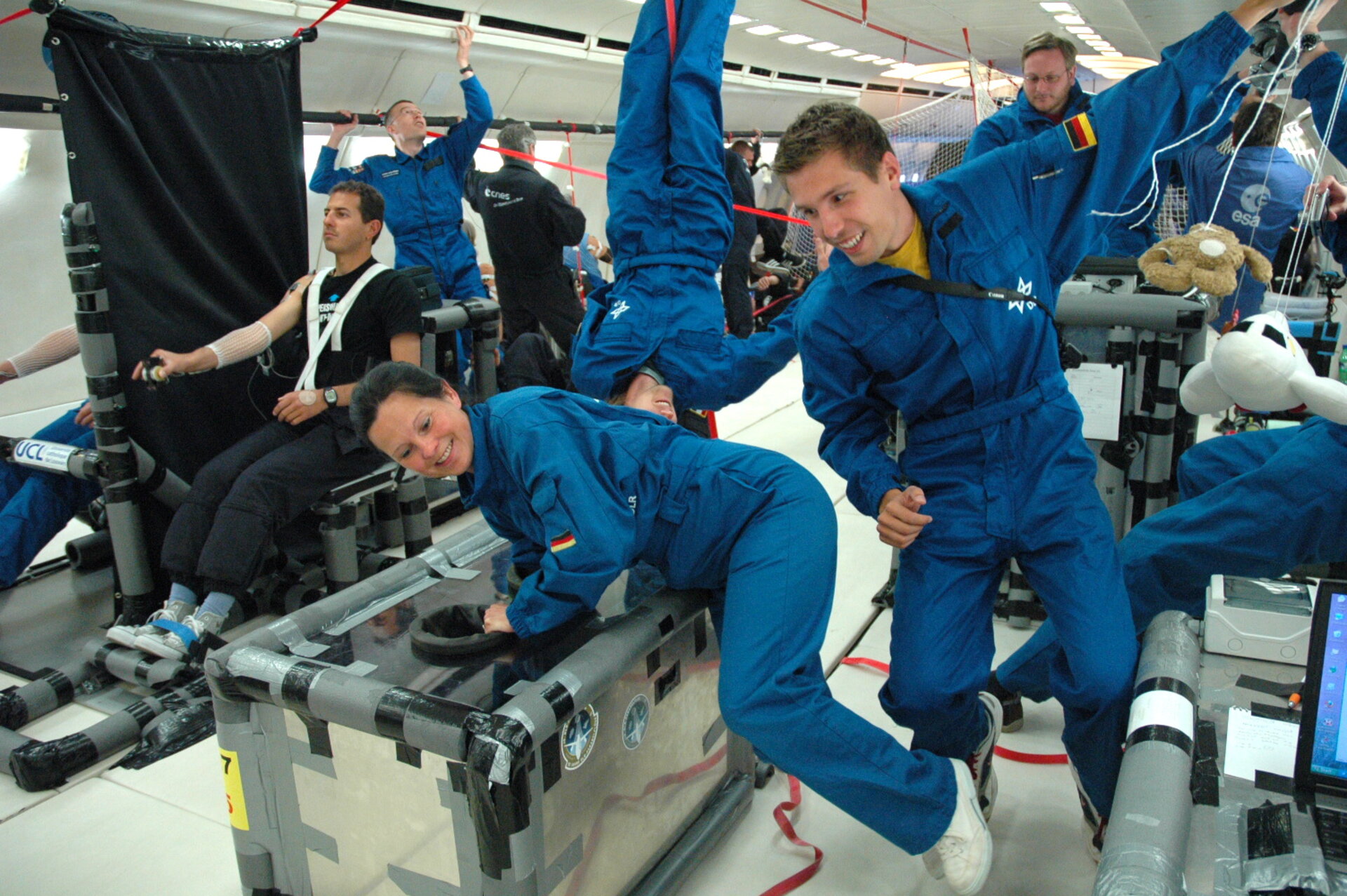 Time flies during a parabolic flight campaign. Senses are constantly subjected to changes, the brain deals with adaptation and your body struggles to maintain the balance.

On the third and last day of the campaign, everybody is smiling and nobody seems to want to go home. The countdown timer displaying the remaining parabolas is on zero and the flyers wish they could restart it.

For the first time, European teams experienced a full partial gravity campaign. Leaving intense days of scientific research behind, what about the feeling?

Managers from the three space agencies involved in this unprecedented campaign – ESA, DLR and CNES - foresee promising results. They are confident in the good use the new generation of scientists will make of this new research tool.

Read a bit more about the experiments. They are a great scientific farewell!

Experiment: Erosion of dust beds by a solid state greenhouse effect and thermophoresis

Dust devils and global dust storms are frequent phenomena on Mars, a planet with an atmosphere strongly influenced by dust erosion. However, the processes leading to these events are poorly understood.

As the martian surface is the goal of numerous future space missions, dust behaviour is important for the design of future spacecrafts. Researches believe that drag forces on the dust particles can be induced by the light irradiation coming for our Sun.

This experiment simulates conditions comparable to the pressure and light conditions on Mars, as well as analog materials, like basalt dust and martian soil simulant. The dust eruptions and the erosion process over the different g-phases are measured by image analysis.

You can consider your heart as a motor-pump under electronic control by the brain. Throughout our daily life on Earth there is a delicate equilibrium between heart rate and blood pressure. Would that delicate balance be disturbed on the Moon or Mars?

This experiment studies different parameters related to heart rate and blood pressure variability to find out if they are linearly correlated with the gravity level. Each flight, two test subjects are monitored while seated in the plane. Heart rate, blood pressure and respiration rate are continuously measured.

Scientists are trying to understand the cardiovascular reactions of the human body to changing conditions of gravity. The results will be useful for basic science and also to support astronauts’ extra vehicular activities from an operational point of view.

Jamming is a familiar experience in sluggish city traffic at busy hours. This situation relates to one of most vivid puzzles in modern condensed matter physics. Many systems of practical and theoretical interest fall into this problem, such as foams, soft gels or emulsions.

Granular matter seems to be a good and accessible playground to study the basic properties of the jammed. During this campaign, researchers are observing granular motion in response to weak vibrations. The amount energy transferred in the packing is monitored by accelerometers buried in-situ.

Tests are performed at various compaction values and for three gravity conditions (Mars, Moon and zero-g). The results will be useful for future control of granular flows under low gravity, a question relevant the future processing of granular matter on the Moon and Mars.

Calcium and reactive oxygen species are known to play an essential role in various physiological processes in plants. These so called second messengers transmit a primary signal from the plant into the cells and are even able to enhance the received stimulus within seconds.

This experiment will identify in real-time certain gravity-dependent signatures during the parabolic manoeuvre. Arabidopsis thaliana cells are observed via fluorimetric measurements. The experimenters want to find out at which stages of reduced gravity the signaling cascades are initiated.

The results will enable us to evaluate how plants will respond to lunar and martian gravity, a vital clue for future attempts to grow plants on these planetary systems.