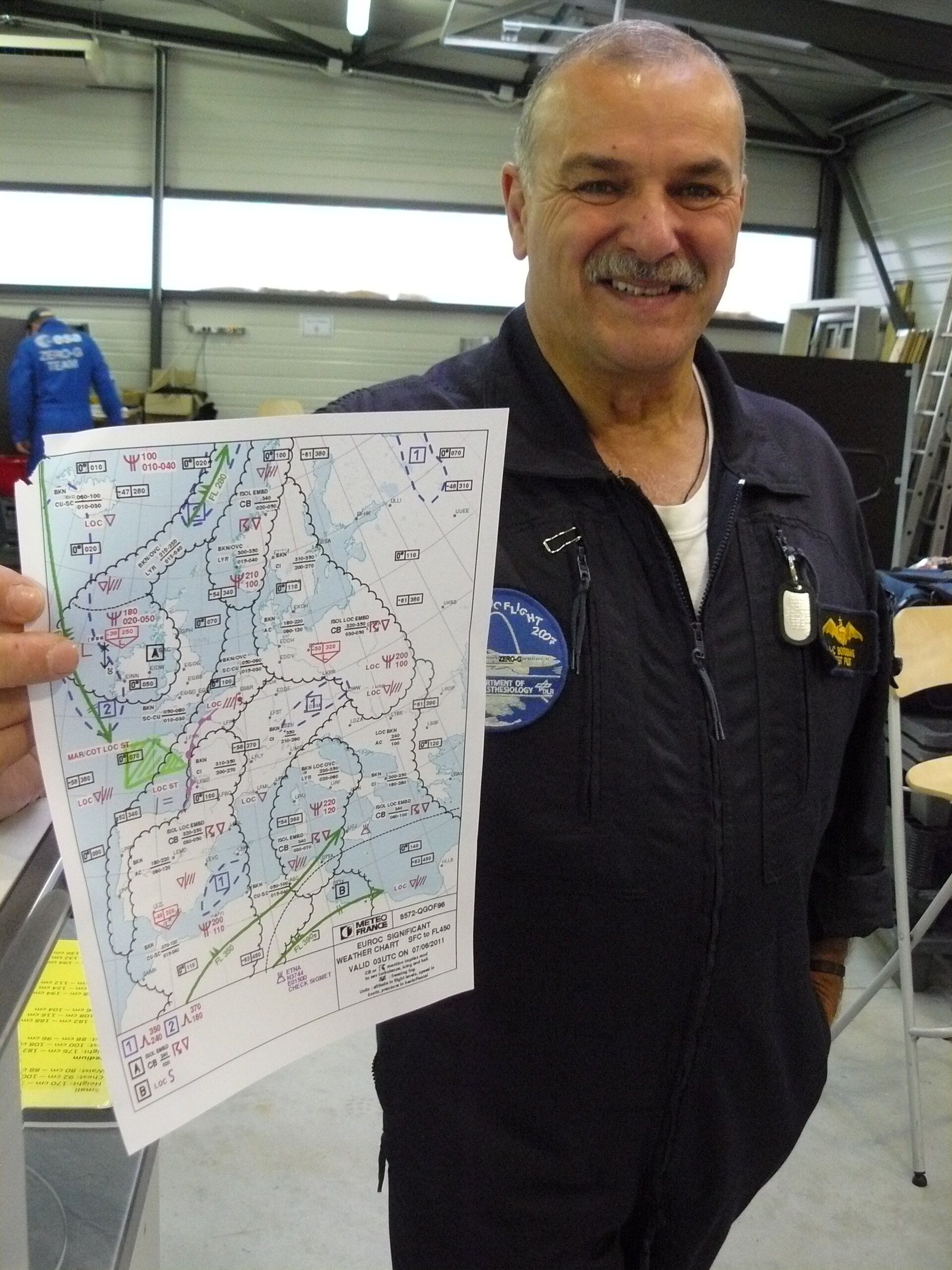 The day was grey and rainy, but already early in the morning good news arrived: Jean-Claude Bordenave, experienced test pilot and captain of the ‘Zero-G’ aircraft, confirmed that we got a clearance to fly to fly over the best possible area over the Atlantic ocean, close to the Mérignac-Bordeaux airport.

The parabolas are flown in special airspace, where no other traffic is allowed, and therefore sometimes plane has to fly for hours to other dedicated area near Corsica over the Mediterranean sea. But not today!

Few passengers got motion sickness and only minor issues between parabolas were detected. During the first debriefing back on Earth, novice flyers got their diplomas as official European Interplanetary Free floaters.

“Thanks for taking us back safely from the Moon and Mars,” said Sébastien Rouquette, CNES project manager for the French parabolic flight campaigns. He trained well for the experience reading Tintin comics and listening to the famous hit of The Beatles ‘Across the Universe’.

Rouquette explained that this first day was already successful in gathering data from intermediate gravity levels, those that will help scientists to uncover phenomena masked by gravity.

Every day this blog will give you a brief description of some of the experiments flying on this first Joint European Partial-g Parabolic Flight campaign. The first batch is already here.

Some people strongly rely on their senses -and particularly on visual information- to adjust their body posture. This is what the scientists call frame-dependency. The experiment investigates whether the perception of visual vertical is affected when the observer is in reduced gravity. Will we get more frame-dependent on Mars than on Earth?

Using a helmet, subjects are immersed in a virtual reality world where a typical city is recreated. The scene is manipulated during the parabolas, so that the brain reacts to different cues. In all conditions, subjects are asked to orient a rod to the apparent visual vertical using a finger trackball.

The results of this experiment will be helpful for the preparation of planetary missions in reduced gravity environments where spatial disorientation could be an operational issue. Scientists hope to ultimately improve the live of patients with difficulties to stand upright due to problems in their vestibular system, as well as for the training of pilots in critical flight conditions.

Pointing the way on Mars

Experiment: Role of the gravitational component of the efference copy in the control of upper limb movements

Our brain takes into account gravity when controlling our movements. Scientists on board the Airbus Zero-G are collecting information about changes in perception and how we control our movements under different gravity conditions.

The subjects should point their fingers towards a target. This simple movement is helping scientists to study the trajectory followed by the hand and the dynamics of the movement. They will also track the muscle activity to link the perception of the arm position to the command sent by the brain.

The tests will help astronauts to avoid potential problems while controlling their movements. These studies can also be applied to diseases affecting the human sensorimotor system.

As biological systems evolved under the influence of the Earth’s gravity, humans were enabled to walk upright while sufficiently maintaining blood flow from the legs to the brain. However, prolonged stays in partial or microgravity environments result in a weakened cardiovascular system, effects similarly seen in patients undergoing prolonged periods of bedrest as in the elderly or injured.

An astronaut could be involved in crucial post landing tasks when hit by a fainting spell, possibly impacting mission success and increasing the risk for injury and damage. To understand the behaviour of the human cardiovascular system, experimenters will use stand up tests during different gravity phases of parabolic flights to analyse the initial responses of a test subject’s cardiovascular system to these different gravitational loads.

The findings will help to improve the medical support of future astronauts during their stay on the surface of Mars and Moon, but also to better understand why people faint on Earth.

This experiment is designed to gather information on the dominating effects of pool boiling during different stages of a single bubble cycle under reduced gravity conditions.

Deeping our understanding about boiling has a wide range of applications. Typical applications can be found on many scales, from large (e.g. in nuclear or conventional power plants) over medium sized (e.g. in the process industry) to small everyday-applications (e.g. refrigerator cooling cycles).